Making money off micro niche ideas is still VERY much possible these days and today’s case study will prove it. I’ll show you how I “accidentally” made $5,000 off one.

Now this idea first generated about $200 in profits for me, and I expected it to drop, but as time went on, those $200 grew to $500, then $1,000’s and MONTHS after it’s initial success, I am still seeing sales come in from it. I will be giving you the details of what exactly happened as well as the specific micro niche topic that led to this success shortly.

Proof of income for the micro niche site that made me $5,000: 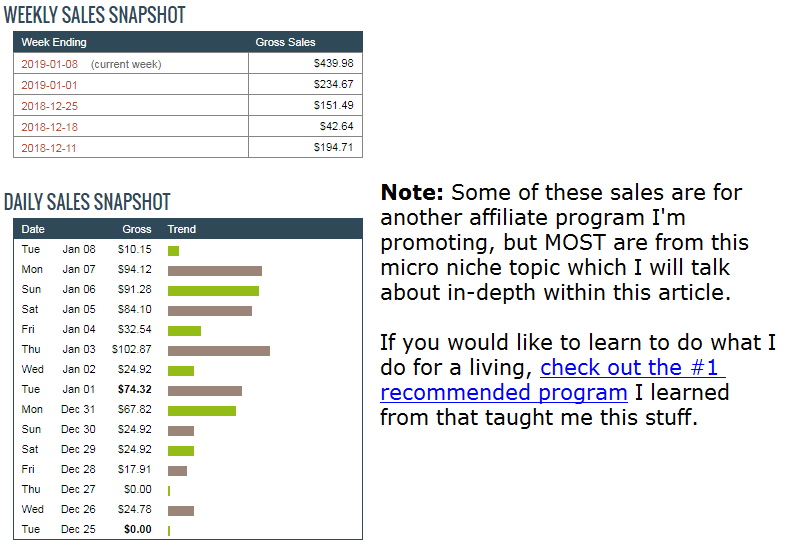 So what micro niche did you target Vitaliy?

It’s actually an old weight loss blog I’ve had for years. In fact, when I started this blog, I talked about that site here. At one point, it was making me a good income from targeting these micro niche ideas which are:

A specific laser targeted niche within the dieting topic. In fact, here is a list of them:

These are all VERY specific dieting topics, which you can consider to be micro niches and by correctly utilizing them through the idea I’ll show you shortly, you’ll see how they led to the sales results…

Now you can do the keyword research on these 3 topics, and what you’ll find is that each of the above topics has had it’s “golden moments” in that they were all getting a ton of traffic searches on Google at one point or another.

And in the case of today’s case study, the metabolic confusion topic was the one which got me to the $5,000+ sales.

Note: If you’re new to the term micro niches or feel you need to learn a little more about them in general, no worries, read this article on micro niche sites and it’ll help explain the subject very well.

Now the weight loss blog in this case study was one I had up for years, and it had been ranking in the top searches on Google for those 3 topics and to be honest, that website in my eyes was “dead” because I honestly didn’t have time to do anything on it. It had moments where it would get 100’s of searches, but when I stopped working on it and it slowed down, that traffic fell down to less than 10 searches a day.

However, something very surprising happened…

I was browsing through the different websites I run one day through Google Analytics, and decided to take a quick look at the weight loss blog’s traffic for whatever random reason and I am SO glad I did, because I discovered that this site, that I though was dead, hit a BOOM, and by boom I mean this:

So what in the world happened?

I mean I didn’t do anything with this site, I’ve had it up for years and it was getting 10-20 visits a day and then this happened.

What was going on!?

I suspect some sort of diet or diet trend hit the market (Things like that have made me six figures before, see an example of a six figur site here.) and popularity for one of those micro niche ideas I listed above became popular and being that my site had already been occupying the first page of Google for these topics, naturally a huge chunk of this tsunami of traffic saw and clicked on my site.

Also I took a look at Google trends to see what was going on and I discovered then that the topic of metabolic confusion was trending:

And naturally (as you can see from the image above) this led to the boom in traffic.

But despite the traffic boom, sales didn’t come in (yet) and here’s why…

The problem was the article all those people interested in metabolic confusion were landing on was completely messed up in terms of the content in that it was reviewing a diet plan that no longer had an affiliate program so I was literally getting empty traffic and NO sales from this.

I needed to update the page ASAP and get a new affiliate marketing promotion onto it. Otherwise, I’d miss out on this opportunity…

But another issue was in the way…

Because this site was SO old, and I had not been monitoring it, many plugins and versions of the site hadn’t been updated and as such, trying to update everything at once, would literally break the site…

In order to fully update it again, I would need to reconstruct it and that’s just time I didn’t have (can’t miss this opportunity), so I updated whatever I could, and with whatever limitations I had to edit the page on the site which was getting the boom of traffic, I did what I could.

I added affiliate links here and there (the editing was TOUGH, but I did what I could) and promoted a new diet program that was selling well on Clickbank and was relevant to the keyword term people were typing up.

To be honest, I could have made more money if I had all my editing available because then I could do more, edit the site better, add more images and so on, but with the lack of updates, my editing was SEVERELY limited.

But anyway, the changes I could make, were made, a few days passed and here is the result: 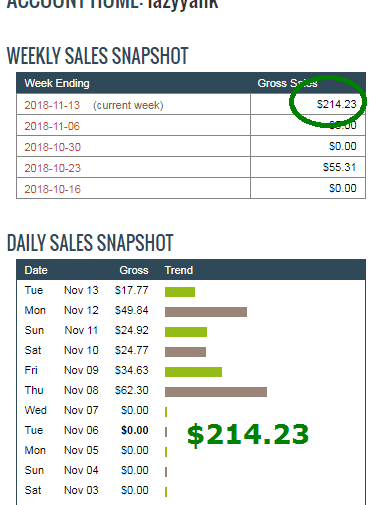 Note: This section of the article is from the original time I wrote it when the $200+ figure hit. Now a portion of sales came from another promotion, known as My Freelance Paycheck, but that would make up about 10-20% of the overall Clickbank sales.

Now you’ll see a whole bunch of $0’s on this chart too and that’s because I literally stopped promoting any and all Clickbank products for a long time, because I just got involved with other affiliate programs, but once this opportunity presented itself, it didn’t take much convincing for me to get back on the Clickbank bandwagon again.

Now to be fair despite the $200+ you see, the popularity of this topic is going up and down, and I would risk a lot in trying to update the site as I would need to.

The point is, I could have made more, if I had more editing options, but with the limits, due to the lack of updates causing that program, I did the best I could and even an ugly page like the one I have up now is still working well, all because the content of that page meets the demand of the traffic that is coming to the page

If I went the route of updating the site and restructuring it, it would take awhile and I would risk losing my 1st page Google rankings, which frankly, I cannot risk given this opportunity, I have to do the best I can with the limits I have on this site and in the future, I will be sure to update all the sites I have in case a boom like this ever happens again.

What does this case study prove?

Well that micro niches still work and that there are still many ideas you can use to make money from them.

However, I still don’t recommend that anyone create a site these days that ONLY focuses on a micro niche, you should instead follow these guidelines on micro niche topics I put up, because the truth is, I kind of got lucky here and took advantage of the opportunity given to me.

Go for the niche approach as the main site, but target the micro niches WITHIN the site, that’s how you should do it, because this is where the long term results come from.

This page I’m talking about in this case study will die out again, 100%, and I’ve learned from multiple experiences like this in the past, that you can’t wait on these lucky events to happen, because you can go for years without getting a break like this. I literally got lucky here.

But it also shows that sometimes it quite literally pays to not let an old site die out or to erase it, because it came back to reward me and truly made it worth keeping. Still, sticking to creating a stable site is what I would suggest anyone chase if they were seeking to profit online:

If there’s any questions you have about micro niches, do let me know. Perhaps you have one you’re considering, perhaps you don’t know if a site you’re creating is chasing one or not or if it’s profitable 🙂

Being that I left this site alone after making the changes, the profits have continued to come in and as long as the popularity of this diet trend continues and my ranking for that term remains relatively high, it’ll keep working.

Here is a screenshot of the paychecks I have been receiving thanks to this micro niche working so well:

As much as I love that this idea worked out, I cannot rely on it and know that the real money is to be made in more evergreen niches. So while this one still makes a little bit every day, I am focused mainly on my big sites, like this.

And on the note of evergreen niches, here is a list of 50 niches. Yes that’s right, 50 of them (and that’s just a small piece of how many exist).

24 thoughts on “This Micro Niche Site Idea Accidentally Made me Over $5,000”