I have some experiences with John Crestani and a lot of experience with what he teaches (making money online) and would like to share if he and his teachings are legit.

In this article on John Crestani, I’ll specifically be talking about 4 things:

1) Of course John Crestani himself who is the internet marketer whose ads you’ve probably seen on YouTube (Where he shows off stacks of $10,000’s).

2) And I will also be talking about his teachings, which come from his YouTube channel.

3) His program, the Super Affiliate System which is what you will be pitched if you follow John and/or his stuff on YouTube.

4) And I will be sharing links to his site and YouTube channel as well, but despite that, I will also be showing you how I became a successful internet marketer and why I believe the approach/strategy I followed may be better for beginners to start with as well, rather than John’s program.

My overall position on John Crestani and his program (Super Affiliate System):

I wish to say right now that I do believe Mr. Crestani is mostly a legit marketer in my opinion (He’s not a scammer, but I don’t agree with everything he teaches and I’ll examples further below) and if you wish to try his program out, you will likely have a positive experience based on the things I saw (I will also explain the experiences I’ve had from his program). And I’ll provide you with a link to join it if you want.

But if you can’t afford his teachings (that will likely run you $1,000+), then you should probably try the other program I’ll be talking about instead, the one which helped me earn over $1 million in sales: Wealthy Affiliate.

And let me explain it this way: 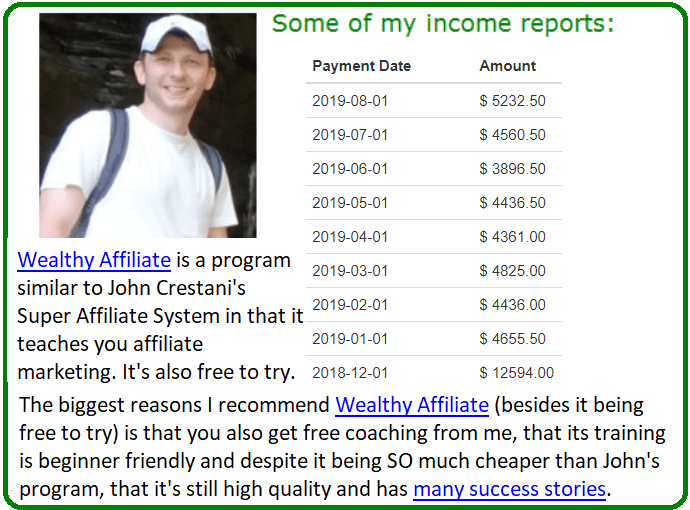 Who is John Crestani?

While you can read up his official bio page here, here is a bio summary of him:

He’s a successful internet marketer and I do believe he makes the money he shows you in his ads and videos. If you watch his main YouTube welcome video, he says he’s made $10 million+.

On his YouTube channel, he talks about different ways to make money and provides tutorials on these types of things:

But most importantly, he compiles his main training on a program called Super Affiliate System, which is a high ticket program that is around $1,000 which teaches these things in much more detail.

My experiences with John Crestani explained (first the positive):

About a year ago, I first encountered the Super Affiliate System and back then, it went by a different name (Internet Jetset) and I was fortunate enough to see a good amount of content and training in this program without having to pay the near $1,000 price (It was only $1 for a trial).

The training was basically about affiliate marketing and getting started in it, and when I looked through it, I did from an experienced point of view, so I was able to see the value behind it and determine that it was very high and thus, I did recommend the program because of that.

I still kind of do, but I say “kind of” because the offer isn’t around anymore.

I also recently saw John come on an online show of a YouTuber I’m subscribed to called Coffee Zilla who basically called him out as potentially be a fake internet marketing guru, and I respect John for standing up for his program and name. They had a great discussion and you can check out the debate these 2 gentlemen had here.

Now here is where my viewpoint of John Crestani get’s mixed:

In addition to this program, I also checked out a number of videos of John’s (which you can find here) and the thing about many of them that I see is that:

If you are a beginner, you may think that how he teaches you to make money in his videos is simple, but from an experienced point of view, I’ve sometimes found that SOME of his videos that teach overly “simplistic” ways of making money, sound good, but if you try it, there are just more unexplained details that would make that formula harder to pull off and not even work.

Allow me to give you an example. Take this video John Crestani has for instance:

In this video, John really DOES teach you a way to SUPPOSEDLY make a $100 on Facebook (daily I believe), but I went through this video and here is the summary (and issues with this strategy):

So firstly, the strategy he teaches is to find popular topics on Facebook like weight loss, then find a weight loss product on Clickbank and basically “promote” the product on the popular Facebook group via posting a comment about how great the page is and how you lost weight with “insert affiliate promotion”.

See the immediate problem I found with this strategy is that MOST Facebook pages you’ll ever try to do this with will either:

Now you wouldn’t know this stuff without having experience, but I do. Sadly, if you look at the comments of that video, you’ll see it’s like 95% positive, but if you actually read them, MOST of the people didn’t try this strategy and are raving about it because it “sounds nice”. They don’t really know how this REALLY works.

But I scrolled through them and found the following one which is probably one of the few viable ones to take seriously and guess what? It basically reinforced the fault I saw with the strategy. Here is the screenshot of that comment:

Now one person in response to that comment advised to join the group before posting the link and the thing is, in my experience that will likely not fix the problem, because most private groups still recognize affiliate promotions and generally (well most if not all the time) don’t allow this stuff, whether you are a member or not…

And in this same video, John doesn’t actually cite a personal example of his, he just basically theorizes based on what I saw. I would have loved to see him offer his own screenshots (but of course hide the details to protect his profits). But that’s not the case…

Now this issue is what I have found to be the case in more than one video of his that I’ve watched. Some of them are truly good, but others like this one, I just can’t get behind.

An admission of guilt on my end before I continue:

Now I’m not a perfect marketer either and I’ve made the mistake of writing articles on my site that theorize about ways to make money, but I have done MANY specific case studies showing NONE theoretical ways of making money online and in fact that truly work.

Now these things do not erase the theoretical things I’ve written and I’ll be making adjustments to fix those posts (and if you find those too on this site before I do, let me know!).

But my overall point here is that I don’t think it’s right to show off these strategies, when they clearly have enough faults to make it UNLIKELY to work.

In my opinion, John is targeting beginner internet marketers and those seeking to get rich quick off this business and while there’s nothing wrong with that, I think it’s appropriate to let people know that this business is legit but…

Beginners, read these warnings about making money online before you do it wrong:

1) MOST beginners will never be able to make money online quickly. For these people, my advise is:

Do NOT ever fall for get rich quick schemes. You have to REALLY work hard at this business and allow at least a YEAR to make it work.

2) There is “technically a way” to make money online fast and it is this:

Setting up paid ads to drive lots of traffic to an offer, BUT you absolutely need to understand paid traffic and how risky it is and VERY often, you will lose money if you don’t. In fact, if a beginner gets into paid ads, I am 99% certain they’ll lose money, maybe even more than they can afford, so it’s a dangerous strategy if done without experience.

It’s best to invest time into a way of making money online from the very core basics and building from that and the Wealthy Affiliate program in my opinion is the best for that approach.

And after you put in the time and work to getting this business to work, THEN get into paid ads.

Do NOT skip into paid ads, otherwise you may end up losing too much money. That’s my warning!

Finishing up on the topic of John Crestani:

Here are my main points:

1) Overall, I believe he is a legit marketer.

But I do find some faults with his videos (and I mentioned one of them above). I don’t think that makes him a scammer, but I would be careful with some of the things he recommends. In fact, feel free to ask me about the strategies he recommends below and I’ll tell you if I think they will work.

He does promote his Super Affiliate System program to you and I have briefly seen some of it and liked most of the content, but it is going to cost about $1,000, maybe more.

I personally believe in trying the Wealthy Affiliate program instead because you’ll learn the same kinds of things, it’s be free to try and you’ll get many more benefits like these.

Those are my general positions on John, his content and his program. And I’d love to hear what you think of Mr. Crestani as well as the viewpoints I mentioned regarding him, his program, his YouTube content as well as Wealthy Affiliate.

2 thoughts on “Is John Crestani a Legit Internet Marketer You Can Trust?”