Within the numberless list of niches that are out there, some have affiliate and money making opportunities that extend beyond just a small or recurring commission.

Some of them have high ticket potential within which 1 single sale can equal what is for some a month’s worth of income they’d get at a full time job. We’re talking $100’s and even more for a sale (Yes $1,000’s) and the 10 high ticket niches (that are ethical) in this article will show you them (video provided too).

I’ll also show you how to turn these niches into high ticket businesses (step-by-step):

Since I do this for a living (income reports will be provided), I will be showing you my personal cases studies of how I do this (and help people do it too). Let’s get started!

Quick update: I originally began this list with only 3 niches, but included 10 additional ones in a video coming up, making the list total to 13, all of which are:

What are high ticket items?

They’re just extremely expensive products or services that offer a chance for people to promote them as affiliates and depending on the commission rate, make anywhere from $100’s to $1,000’s per each sale. That is the most obvious pro to this topic.

But there are also many trade offs of promoting something so expensive, the biggest is that the traffic numbers for people who seek these things and those who are ready to pay so much for them is also much smaller because most people generally cannot afford something like this so the audience numbers greatly decrease, but at the same time, 1 sale can make up for what would take dozens and hundreds or sales to make a lot of money.

Note: They are also known as “big ticket items”.

Before we begin: Beware of unethical high ticket niches, especially this one:

There’s a big reason I used the word “ethical” in this post. And that’s because trying to promote something overpriced to people who cannot afford it but think it’s a good deal is itself unethical and it’s in the make money online topic that I find this problem occurs most!

For example, within the make money online topic, recently there have been many new programs coming out overcharging and tricking people into spending $1,000’s more for training and coaching (full article on bad high ticket programs).

And these same programs also push people to promote the programs to others as affiliates as though they are truly great opportunities, when in fact, they are financial traps and pyramid schemes. That is very unethical.

There have been several programs like Digital Altitude and MOBE that were taken down by the FTC for operating this way. They lured people for under $100 to join, then upsold them for up to $50,000+ (YES that much).

Then they told those who bough the upsells that they could make big commissions reselling that to others. The idea was, spend a lot to make a lot by luring people into the same scheme. Folks, that is a scheme and I’m happy they are no longer in business!

But yeah, I really needed to mention that warning before continuing:

Now let’s get back to the post and get info on the ethical kind of high ticket niches:

The only ethical, high ticket niche topics I personally endorse are ones where:

And that takes us to the first 10 high ticket niches (video):

These were the first 3 I used when I wrote this article originally:

How much do you think the cheapest washing machine costs? A few hundred for an OK one.

But what about the high end ones? Several $1,000’s. That’s how much. So let’s me personally show you how fantastic this topic is, by just showing how many people search for a given keyword for it: 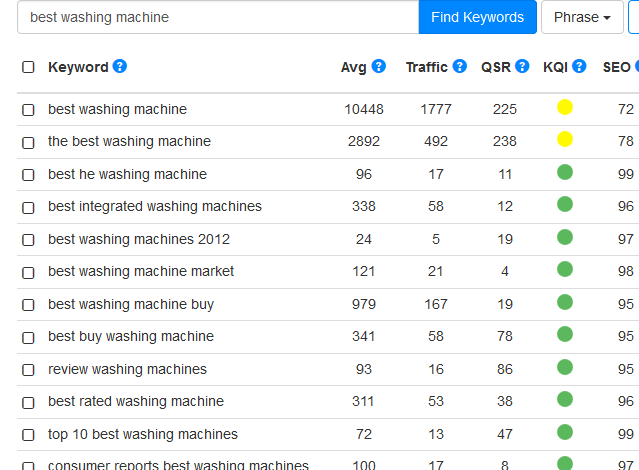 With a traffic potential of at least 10,000+ every month, as well as individual washing machines which can cost a lot, every sale you make can have you living quite comfortably…

But where would I go to sell them? Honestly, Amazon is perfect. What I did was, I went to it and selected washing machines which were in the range of $1,000-$10,000 to see which ones were selling and look at this: 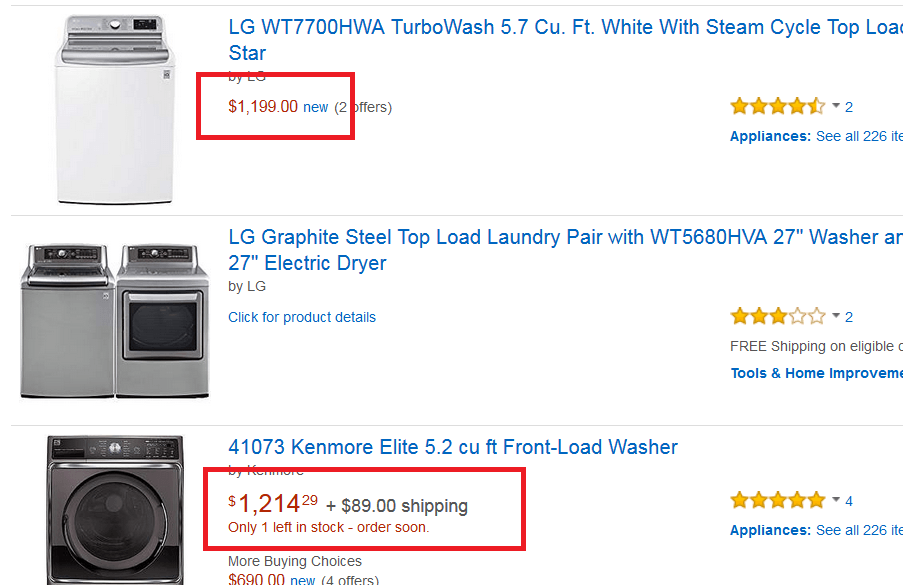 Now I only briefly went through the list of results, but there’s ones which surpass $3,000 from what I saw. Some of them are washer/dryer combos you get and many of them have over a dozen ratings meaning that people are buying it.

Now I did specify that ideally you want the topic that has the most buyers willing to spend a lot of money and in this basic niche, you do have that, but for these specific products, you do not, but that’s always going to be around.

If you target the main topic and within it promote these high ticket items, you can sell them, not often, but remember that the 1 sale you get for it can totally justify the marketing effort. Obviously, you want to promote something that has good ratings and won’t break down. 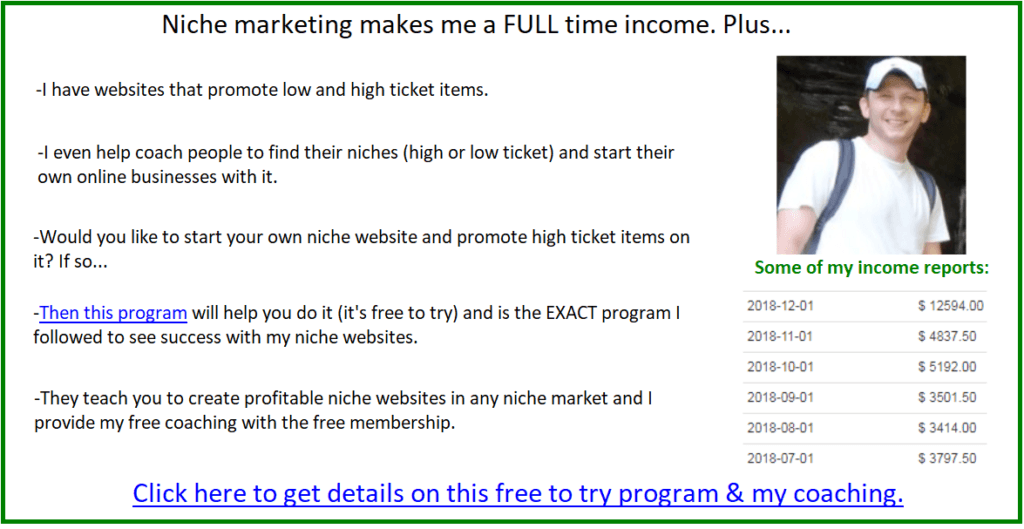 If you’re someone who fixes, understands and even builds laptops, computers, you’ve got yourself another high ticket niche. I’ll let you figure out the keywords for it (tutorial on profitable keywords), but here’s a brief look at all the expensive ones being sold on (again Amazon): 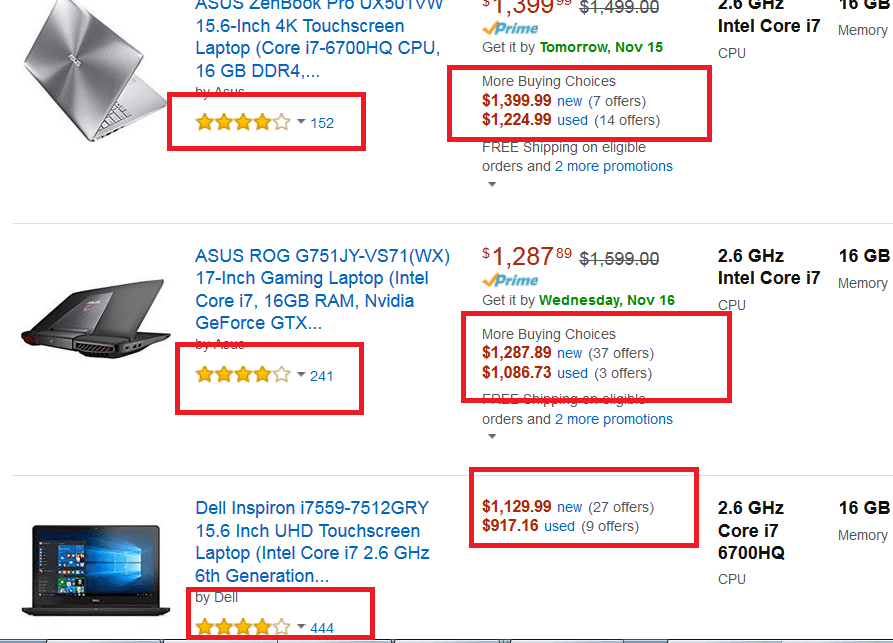 Although the following screenshot displays the ones which are a little over a $1,000, on that page I saw more expensive ones, but I decided to screenshot this area because of the VAST numbers of people who are buying them.

With these 3 laptops alone, you have over 600 people who have rated it and possibly way more who have actually purchased them.

There’s people who go beyond buying those ones and aim for the higher up products. Fine, as long as it’s a good quality product and it makes them happy, you can sell it.

3) Watches (the obvious one you never though of, admit it!):

Yeah, we all know Rolex watches are expensive, but if you’re a watch freak like many people are, know that within that topic, you have a select number of people who are willing to buy them for so much money. $10,000’s or more even.

And guess what? Amazon has them too:

Yeah people buy those too and while for someone like me, those prices are insane (and I’m not into watches personally), you may be and your niche certainly may be, specifically the ones above.

What I would do if you were in this niche, is I would target the high end company that sells the watch (Rolex, Omega or whatever other company known to have the most expensive ones) and then make product reviews for each one.

It helps if you own one of these so you can be seen as an authority, but knowing the information on these watches is enough to sell them.

Note: Want to get free training on this? Here you go: Selling high ticket items as an affiliate. Furthermore, I also have an article there with another 10 high ticket niches for affiliate marketers to start promoting in!

5 steps to turning a high ticket niche into an online business that makes money:

Since I have experience with this stuff, allow me to show you how to take any one of the 13 niches above and turn it into a full time online business:

Let’s take the laptops option. I’m going to give you 5 simple steps that start from picking this topic, to profiting of it: 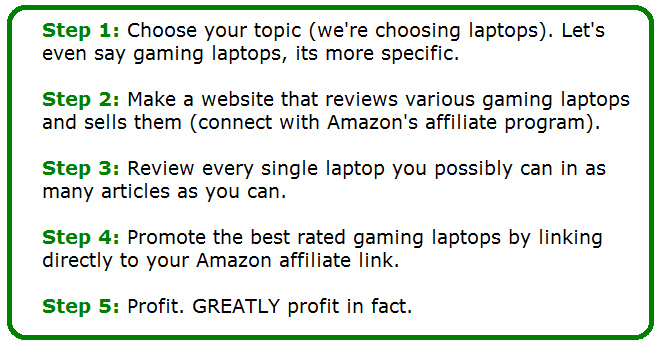 Should you wish to to pick a different topic be it the other 2 above or something else, these same steps will still work just as well. 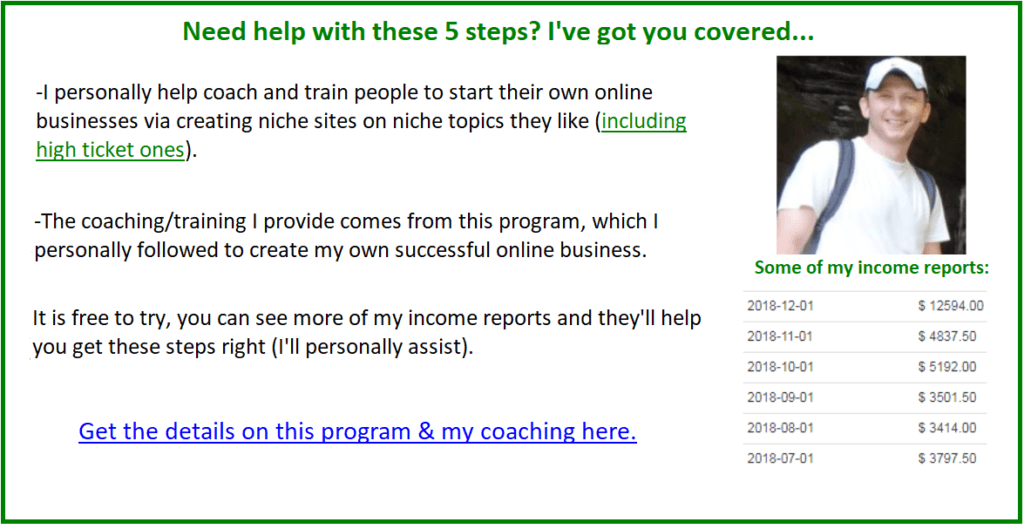 Like I said, there’s far more than just the 3 above but as long as you know how to find niches and then the most expensive products in them that won’t scam people, you have a great opportunity to sell them.

As long as your marketing efforts are correctly targeted, making just a few sales is enough to carry most people on for a year. And I can also tell you that this stuff I’m writing about is not theory based, it’s totally based on personal experiences that I’ve had making these types of websites over many, many years and using those same 5 steps each time.

I can tell you that anyone who works hard on a website and uses those 5 steps can reach incredible earnings, especially if what they promote are already high ticket items!

Just imagine the potential money you can make with promoting high ticket products:

3) Just doubling your sales would increase that yearly earning potential to $72,000 and the further we go, the more you get how crazy awesome this type of business model can get.

I’ve reached these kinds of numbers before and I can tell you that it’s a reality. The only thing you need is a training program to show you how to start and get there: 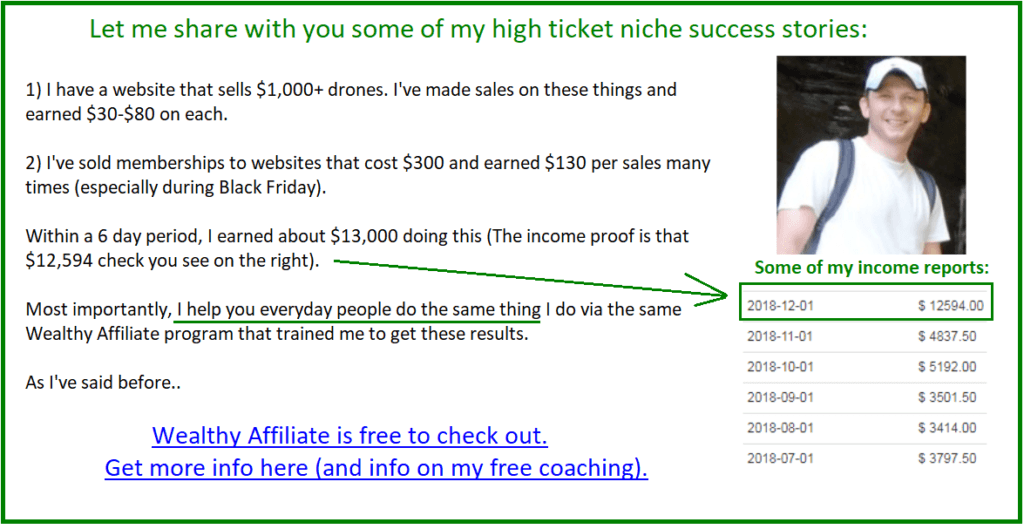 High ticket niches are everywhere (here’s over 50 more niches) and if you have one you are considering making a business out of it, but have doubts, here is what I recommend:

2) Check out the Wealthy Affiliate program I recommended and it will absolutely help you make your dream online business out of that idea. And if you need more proof why that program is great, read this review of Wealthy Affiliate and see more of my income stats, as well as from others who used it.

I owe my success in niche marketing to it.