Have you ever purchased something thinking it was amazing, but then were completely disappointed? That’s what shiny object syndrome is.

Here is a great representation of what shiny object syndrome looks like:

This before and after reaction occurs whenever shiny object syndrome works it’s spell on you. And I am certain, at least once in your life, you have experienced this too.

I don’t even have to ask “have you ever had so and so”, because this problem always happens, to everyone. And people who have seen this happen before can tell you that “Ah, seems you had a case of shiny object syndrome”.

SOS syndrome is extremely powerful and in every single case of it happening, after it takes hold, it’s hard to stop, but once you realize that it was a lie, then it’s too late:

1) People have gone broke because they let this emotion take control of them. Gambling and making foolish bets is a perfect way to describe SOS taking a hold of you.

2) People have let it happen again and again, even when they knew better.

3) And most people despite realizing that it’s happening, still haven’t learned how to stop it.

What is the definition of shiny object syndrome?

It’s an emotional reaction we ALL have when we see something that looks or sounds great and we want to get it without thinking about it first. It can be:

But it sounds and looks so good, that the emotional response we get from just thinking about it makes us feel that we need it, right now.

Make money programs (where I most typically see SOS happen), clothing, toys, miscellaneous products, whatever the case is, shiny object syndrome hits us all, and it doesn’t matter what industry it’s in. It typically happens in certain subjects more than others, but for the most part, it’s a natural thing we all experience.

But this is also a condition that often leads people to act on that emotion and makes them do foolish things such as spend money on what very often turns out to be far less than what we imagine we’d be getting and don’t worry, it happens to everyone, including myself.

2 quick stories of some of my personal shiny object syndrome mistakes:

In the make money online world, shiny object syndrome happens too often. In my case, before I finally realized I was letting it control my rationale and actions, I was buying up programs that would promise to make me quick money with basically no effort if I just spent $50 or a $100 or more.

And in hindsight, I got off lucky because today’s products often go beyond these prices as many are high ticket and those are GREAT at hitting you with the SOS sales pitches. SOS leads people to buy make money online products that make them spend $10,000’s sometimes.

See this case of a company called MOBE for example and read the comments. So many people fell for that program and even when the price tag of it was $10,000+, people still purchased it because the sales pitch.

And let me tell you, the marketers/sales people who know how to sell well know EXACTLY how to exploit people’s weakness and bring out that SOS syndrome in the people they are trying to sell to, and let it take control of them.

I never kept track of how much money I lost falling prey to this, but I can tell you that it was a lot. In fact, when I made a list of all my major internet marketing failures I’ve had, MUCH of it occurred because I allowed SOS to take hold.

I also talk about these failures, and being able to succeed despite them in this article where I discuss my $1 million earnings in affiliate marketing.

I am actually a martial arts instructor. I received my black belt in 2017 after training for nearly 9 years. All throughout my time studying the arts, I would pay a lot of money for private lessons with some of the instructors at my school.

When I finally reached black belt level, I felt that taking more lessons with the same trainers would “finally have them showing me the real stuff”.

I was at first disappointed to see that most of the material we were covering in our private lessons wasn’t exactly something “nobody knew about”, but rather basics and sharpening them (basic punches, kicks, ect…). While this made me bored to re-learn the same material, at first, this would later turn out to be an epiphany for me and help me turn down the knob on my shiny object syndrome.

Overall, if I had to put an estimate on how much I spent to learn my lesson, it would probably be $20,000.

Yes, learning from shiny object syndrome cases can be quite expensive, but I did make the right choices from these lessons and as a result, I was able to move forward. Most people however do not and they can even end up spending more.

As a marketer myself, I learned that there’s certain things “skilled sales people” do to trigger this emotion. Here’s some strategies they use (know these and avoid getting screwed by them):

1) They keep talking and hyping their sales pitch.

This is a tactic to get you to stop thinking rationally and only hear what they’re saying and if what they are saying is nothing but good, grand things, you’re going to start believing it.

2) They tell you that there’s a BIG sale going on if you act right now.

This also makes you stop taking time to think because it triggers the emotion of acting quickly, otherwise, the message is that you miss out. This is often used in webinar scams so be careful there.

3) If it’s something really expensive, they will point out the benefits…

And how quickly you’re going to make your investment back and even end up making much more. For example, how often have you heard the following message:

Such a message makes people think there’s “no risk” in spending so much money and it ensures that any doubts they have about investing in this don’t stop them from spending.

4) They exploit whatever problem you’re having and…

Connect with it by sharing their own, similar story, then tell you how they managed to stop the problem. This kind of sales tactic happens all the time in make money online programs. They always start by giving you their “personal” story of how they were poor, had no job, ect…

This tactic makes a “intimate” connection with the person looking to buy the product and makes them feel the sales person is their close friend, since they had a similar experience and if the sales person, solved their same problem via whatever they are selling, you can too, if you buy it.

5) The use big, inflated words to make you think the product is bigger than it really is.

There’s certain words that people use to emit “shock” reactions to better connect with the person they are selling to. Some of these words are basically clickbait, and this method is used on more than just websites. It’s used on labeling, videos, anything that involves hearing and reading basically.

Here’s more tips on spotting scams I advise people use on everything they are thinking of buying. It’ll stop them from getting scammed.

How to stop shiny object syndrome from taking a hold of you (the 5 rules):

Our emotions can be so powerful that when they take hold, to quench that emotion, we are often ready to pay whatever, as quickly as possible to quench it.

But to stop it…

You need to first recognize that this is an emotion and that very often the things you are led to believe are actually things that are happening inside your head and not in reality. Once you recognize this, the power of that emotion suddenly loses it’s fuel.

Next, you have to recognize the 5 triggers I talked about above and listen for them when you are being sold something. Very often, it is the case that if you hear something that is associated with those triggers, that your emotions are being exploited and you have to be VERY careful, especially with the more higher priced products you’re being sold.

It is a good rule of thumb to not let your initial emotions take hold when something that sounds and looks good to buy pops up in front of your eyes.

Click away from that good looking site with it’s good looking product, research it, then come back. Trust me, that product/offer ISN’T going to go anywhere. If it makes money, the marketer selling it would have to be a fool to make it unavailable.

Or keep the page open, then open up a new window and do research.

Step away from the emotions and pitch, let rationale take over and let that that guide you to make the decision.

If you’re talking to a sales person, ask important, tough and often uncomfortable questions about what they are selling. The more they are trying to get you to stop thinking or the less they are patient with you = the less likely you should be to buy their product. 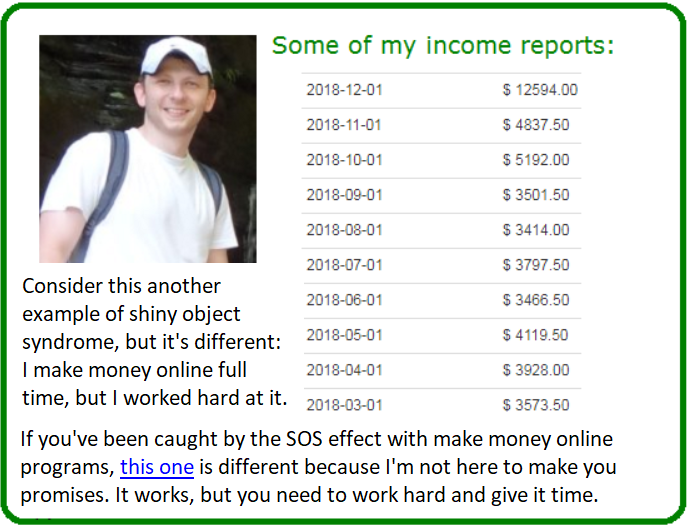 Not everything shiny object syndrome related is bad. Sometimes, you can have a good sales person sell you a good product that actually meets the hype, but let me tell you, that scenario is extremely unlikely.

Take me for example, while I am a sales person and I pitch people make money online programs like Wealthy Affiliate, I still advise that no matter how much you trust me to still exercise the tips above. Ask me questions about it, be doubtful, but know that this is the right way to protect your wallet.

I personally try to stay away from writing to exploit these emotions in people, so when I write sales pages, I give my own, personal experiences as the proof of the sales page’s credibility, vs hyping it all up. I find that when a sale is made via this option that I know it was an honest one.

And if I’m on the other end of this stuff, I try to use the same tips I gave you guys above. I cannot begin to tell you how much money I’ve saved in the process.

But what happens if it’s too late? And you let it take control?

In the worse case scenario, there are safety nets in place. So if you lose money to a scam because of shiny object syndrome, here are ways to get your money back.

If you have a personal story on falling prey to shiny object syndrome, I’d love to hear about it! If you were able to conquer that emotion, I’d also love to know how it worked out!

20 thoughts on “What is Shiny Object Syndrome? How to Stop Falling For it.”