How many times have you read an article, watched a video and felt very disappointed after, not necessarily because of what you read, but because of the headline that you saw which gave you a preconceived opinion of what would come and it never happened? For me, it’s happened many, many times.

Did you ever feel like you were taken for a fool or did you feel like you learned a lesson in not jumping to conclusions too quickly? If you felt the latter, you might want to think about it again because you may have fallen for what’s known as clickbait.

What exactly is Clickbait?

Well it’s just a way of creating very extreme sounding headlines and titles that we can’t really help but want to click on. Then when we do, we see the content is not even close to what we saw in the headline and usually these things whether it be articles or videos have us wanting to click on a link or ad.

Here is an example of what clickbait looks like:

Why is Clickbait used so often?

Well because it works and for people who use it to make money, clickbait can often lead to profitable clicks and traffic.

You often see a lot of people using Clickbait to attract the most number of audiences as possible (clicks). It could even be pictures: Cute animals, sexual innuendos, people doing extreme things and so much more.

Well there exist a lot of websites that get paid for the number of visitors they get. And in order to get more visitors to see their site and click through to it, they will use clickbait titles to draw them in.

More people coming to the site means more money is being made by the site through places like display network programs.

An example of how much money a site using Clickbait can make (vs not using it):

John runs a diet blog that gets 50,000 visits. He earns $5,000 a month through display networks like Google Adsense and Mediavine for those visits. These programs pay John to display ads on his site and the more he gets, the more they pay him.

John begins using clickbait on his website’s article titles and suddenly, has 100,000 visitors coming to his site because of it. Therefore, his earnings go to $10,000 a month.

By just using clickbait, John double his money, hence why he started using it! 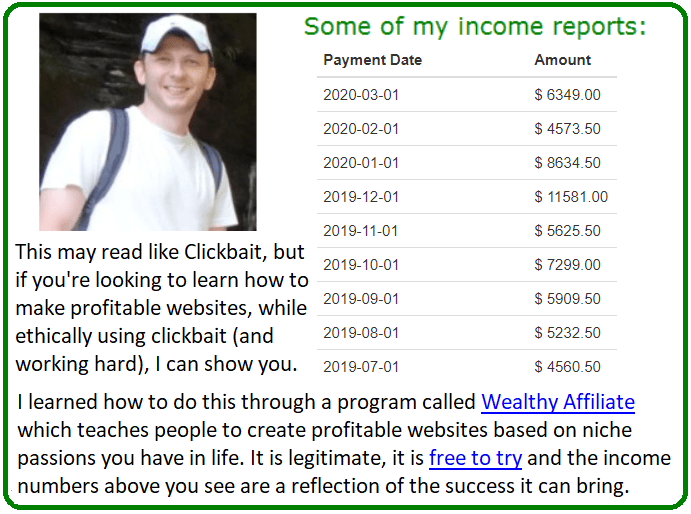 The negative side of clickbait explained:

There are drawbacks to using and being on the opposing end of clickbaiting. I stand firmly by the belief that if you do basically nothing but clickbait, without providing quality content to match the hype of the clickbait, that you’re going to ruin your reputation and people are not going to trust you. This is one of the reasons why so many websites and news media stations (the most common places that use clickbait to get views) lose their reputations.

I’ve unsubscribed from many people, stopped reading certain news sites and people I once trusted, all because I fell for the Clickbait they used on me more than once. As it kept happening, I felt less and less trust.

For example, I once fell for a work at home special report scam site, but after learning more and more about how they worked, I never trusted them ever again, even if they were promoting legitimate programs. This is what can happen when you use clickbait too much.

Would you really want to read or watch something that said so much in the headline, but didn’t deliver in the content?

I wouldn’t and if that same person kept doing this over and over always leading me to try and click on an ad or sell me something, I would continually be disappointed, eventually to the point that I would stop trusting them.

If I feel this way, I know many others would as well. Are you on my side here? Let me know in the comments section if you’ve ever had a Clickbaiting experience and you stopped trusting the person or if you still follow them. It doesn’t matter if it’s a person or an organization. What does this mean for those people?

It means Clickbaiting if done wrong, can hurt your business!

Getting clicks is absolutely important, but it’s only part of the plan. What you do after the people come through is just as important.

The businesses (websites) who keep hyping their headlines but not delivering are going to lose viewers and overtime that business policy isn’t just going to make the business decline, it’s also going to possibly ruin it.

See What I used to create a good online business (this is NOT Clickbait).

1) Celebrity news is huge, especially in the online world. I won’t name any places, but there’s more than a few popular sites who Clickbait VERY often without actually giving you much content to back it up. “So and so says THIS” or “He or she did this”. Ok so you got me clicking on it, but then I just read what they did, but not the backstory of why. The content basically didn’t add to the headline. In the end, it’s just the title that makes things unique and nothing else. The whole story being told ends up being shallow and only remembered in my eyes as me being deceived.

2) YouTube videos of people doing reviews on products. The videos are less than 30 seconds long, usually play some kind of song and instead of learning about the product, you just see the video telling you click on the link in the description box.

3) Websites reviewing products calling them “SCAM” or “EXPOSED” in the title leading you to believe the products are a scam and making you click on it to learn more, only to find out that the article is just selling it and not saying anything bad on it or in many cases not even talking about the product in question, but just telling you to buy something else. These are the sorts of people who don’t know anything about the product, they just hype it up to sell it (or another product in it’s stead).

So to people who have gotten me via using these tactics and then didn’t give me good content, congratulations, you got my click, but you lost my trust. Which weights more?

Back up your headlines with great content, alongside clickbait titles to match it:

This is how you use clickbait ethically. Not everything about Clickbaiting is bad.

If used in certain ways, it can bring about good results and I’m not just talking about more clicks, I’m also talking about satisfied readers/viewers who will be returning to you in the future. That is what you want to get out of this!

Consider my title above as Clickbaiting if you want. Some of the words which may have stood out to you are probably: Baiting, ugly and truth. Clicking on this article, you were probably expecting to read something about why Clickbaiting is bad right?

Well that’s exactly what I hope you saw while reading this article. If that expectation led to satisfactory outcomes, then Clickbaiting has been used in a good way.

As a business owner, you want new people to visit your site and come back. To do that, you need to deliver on the headlines you put down.

10 thoughts on “What is Clickbait? The Ugly Truth Behind it.”