I want to share an amazing case study on how to make money on YouTube videos and specifically, I’ll be showing you 1 which I made, that earned over $10,000. And overall…

I’ll be showing you how to make money on YouTube in general.

Let me first talk about this $10,000 earning video for starters. The thing about it is that there is literally…

Yet despite these negative things, the video itself promoted a program (and still does) that pays me per lead, and in spite of all the bad things I cited above, it still made sales and still does.

In a period of several years, on autopilot basically, it accumulated over $10,000 (in the end part of this report, I’ll display the sales and the value of each one and how it added up to this number). And I’ll be explaining all of this stuff and again, showing you actual video so you can see this for yourself.

The point of this whole case study is to show content and what you say in the content you create truly trumps the visual quality in all aspects. So let’s get started…

Here’s the background on this video which generated the $10,000:

In an effort to boost sales to one referral program (Wealthy Affiliate), I ventured into doing things a little bit differently. I decided to make a single video, put it up on YouTube and directly linked it to the promotion.

The video turned out to be full of editing mistakes and overall did not look very professional. For example, the video editor I was using had this feature where if I click on an area of a website, it enlarges it.

I never meant to do any of that as I was making the video and in the end, the viewer would have a hard time seeing what I wanted them to see.

One would think that this problem alone would be enough to ruin the whole video experience, but to my shock, it still made money because the content of that video was very rich and something people were interested in and that’s the main point I want you to take from this case study.

Usually when I do how to tutorials and it includes videos, I always endorse that people link it back to their website to gain more authority as it does count as content. However, I just wanted to see how this experiment would play out so instead of linking back to a site, I just linked it to Wealthy Affiliate.

In fact, look at the video yourself and tell me how bad it is:

Here’s basic info about this video (and how bad, yet successful it is):

Now let’s look at the stats that the video has turned out since then: 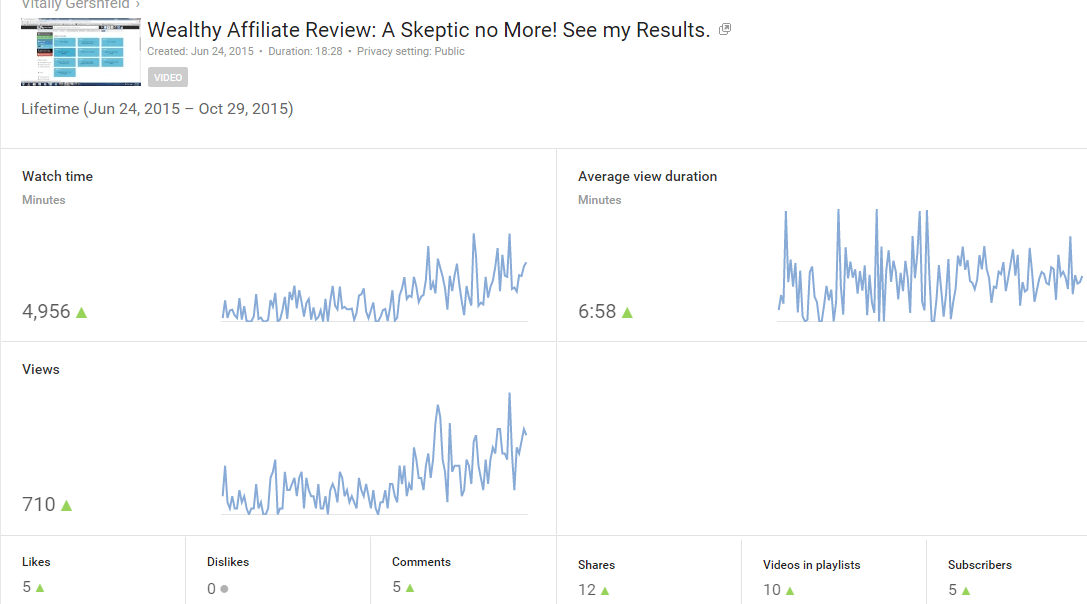 This is a screenshot taken from my analytics page for this video. YouTube has done a fantastic job of providing some excellent data I can use to further improve upon it, but let’s quickly analyze a couple of stats:

The income results of this video:

So let me say that in this section, I was updating the article every time a major milestone of profits came into the video, so while the video started slow in the income department, it slowly did grow. So keep reading because it actually made OVER $10,000.

This was the first update of the video:

I had received 7 referrals directly from this video.

Out of those referrals, 3 people have upgraded to the premium program provided by Wealthy Affiliate, for which I get paid over $20 for every month. In other words, 3 sales which = $60+ a month (considering they are still around).

So was it worth it to make this video?

Yes it was, although monetary stats from this are very low and there ARE ways to improve this video, I am glad I put in about an hour’s worth of work to possibly be making $60+ a month now. And keep in mind, the viewing stats for this video ARE increasing, which means in the future, this labor could yield even more results:

I never though this video would do well or even get any major traffic because the keyword I was aiming for (Wealthy Affiliate Review) is pretty competitive, but what I was looking at when it came to competitive was Google, not YouTube itself.

The analytical data for this video shows that nearly 60% of all the visitors that found it, did so through YouTube’s search while another 24% found it through related videos. That’s almost 85% right there. I don’t think any visitors came to this video through Google’s search though.

What mistakes have been made and how I aim to correct them:

These 4 mistakes are the major ones. I was able to fix the third one by adding more annotations to the video so people could click through to the offer more easily. Yet still, on average, 1 out of 100 people are signing up through this video. All I can really do is add another annotation or two earlier on in the video.

As for the first 2 mistakes, I can’t fix the editing. I’d have to remake the whole video and upload it separately so I’ll keep it as is. Same thing for the length.

I don’t have a say in the first 2, but I can help improve both factors by fixing the third one.

What I did do correctly was focus on making the video very rich in content by truly giving people a good review they would trust. Having 0 dislikes is a good sign so far!

Leveraging from my case study: 3 easy ways to make money on YouTube.

While doing any of these 3 things, try to maximize the conversion rate of the videos you put up. Use these tips:

Try to keep the length of your videos under 5 minutes. Unless they are game plays or shows, most people in my experience don’t stick around long enough and get bored quickly. In my case study, people left around 7 minutes, while the video was 18 minutes long.

Be precise and thorough when you do video reviews of products. I try to let people know everything I can about a product because it makes them trust me. And it’s also an honest way to help people.

Don’t try so damn hard. I think my video converted better than I though because I was very calm when I spoke. be natural. If you’re shy, you don’t have to film yourself, you can just talk or if that’s also something that’s too much, you can get someone to speak for you.

Update 4/1/16: This video continues to earn even more.

The last time I wrote about this topic, it was basically December 2015, now since then, 4 months have passed and the video continues to get views/sales:

The video now has accumulated over 3,000 views and so far, there have been 15 more sales made! Now obviously 15 sales in 4 months may not be a big deal to some, but many of those sales are re-occurring meaning they re-pay every month. 3 sales which is what I originally had, paid about $60/month and with an extra 15 sales, making it 18 in total would pay about $400+ a month. Those are very good “dividends”!

92 sales in total, each of which provides on average about $100. So nearly $10,000 was made since this was first uploaded. That’s quite an incredible thing considering it was a very bad looking video.

Update: Improving the quality (and sales) of future videos, how I did it.

Years passed since I made that bad video and it still gets views and some sales, but had I originally made the quality of it better, I am certain, I would have earned far more from it.

And also because I got into YouTube marketing more, I eventually created this beginner tutorial to help you monetize with it.

It has been YEARS since this video was publicized on YouTube and yet it is still up and getting views (and sales). Here is the most recent report I have to share with you…

And these $12,000+ also combine with the $300,000 I made promoting this program across other networks (here is the case study where I talk about my results with using Wealthy Affiliate’s bootcamp course).

It just so happens that this video not only contributed to my overall sales in helping promote Wealthy Affiliate, but those same sales helped me get to the Wealthy Affiliate Las Vegas Conference several times.

So as you can see, the potential with YouTube is great, even if you are like me and can’t really create amazingly stunning looking videos.

This case study proves you don’t need to know how (though it will help and I have improved my video creation skills since).

More updates: My experience with YouTube has grown a lot and:

I have created a new website called HelpingHandAffiliate.com which actually goes deep into the details of how to properly create YouTube videos and do affiliate marketing on them.

So if you want to take action and make your own videos, make money online, that tutorial will be of great help!

The good news is that this original Wealthy Affiliate review I made, while bad, did help me in a substantial way to grow my experience in video creation and in the helping hand site I linked to above, you will see that the quality of the videos I made since, have drastically improved!