Spoiler: It’s good. The future of affiliate marketing is that it’s going to grow. I’ll show my personal income reports that have actually been updated all the way to 2019. Here they are (right): 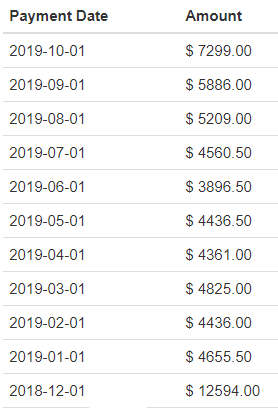 Now I do have more income reports (all from affiliate marketing) going back to around 2014 even possibly 2015, and I even had saved paychecks from places like Clickbank that go back to 2009 and 2011.

The point is that even back then, the question about what the future of affiliate marketing is going to be was on people’s minds and that’s because the popular ways of making money through this method were changing and even getting destroyed.

But being that I’ve experienced these changes, these doomsday periods and kept going, as well as continued to make money, I think I am fit to explain what the future holds for this business and the fact that I continue to make money with it, shows it’s promising (And I am not the only one).

This is my overall opinion on the future of affiliate marketing:

The more I learn about affiliate marketing, the more I believe this awesome opportunity isn’t going going to vanish.

I even think it will continue to grow, and at a rate that honestly will not be able to keep up with the rise of people that use the internet.

Furthermore, the more I though about this topic, I could not find any negative reason that this wouldn’t be the case, unless of course, some none online doomsday event takes place and completely destroys civilization or perhaps governments around the world become very totalitarian and enact laws/regulations to limit the usage, and even if that happens, it’ll just create a black market for people to use the internet outside the knowledge of that authority anyway, so in short…it’s just going to grow.

But if you need specifics, let me give you some numbers and rational theories to ponder that would be hard to disagree with…

5 big reasons affiliate marketing will not go away:

1) Statistics show there is consistent, gigantic growth of people who use the internet.

A few years ago, it was estimated that over 2 billion people use the internet. Checking that number today, it has surpassed 3 billion.

Here is a link to the graph, as well as other stats you should look at if you ever think this is going to go away.

In the past, internet usage was mainly centered around western countries, due to their technological advancements, but an even bigger boom started to occur when more and more third world countries began to grow their economies and technology which also gave them access to enter this digital world.

Also, with the growth that was occurring, many digital companies to help support this exponential growth, turned to third world countries and outsourced their services through employing people of those nations. This is why a lot of customer service representatives nowadays are usually from India, China and other areas.

But at the same time, this exposure to that digital world, helped those countries enter into it.

And let’s not even get into detail about how mobile devices helped fuel this too! I think we can all agree in that particular instance, having mobile devices has done a tremendous service for internet growth and opportunities to make money from it in general.

2) With that growth, the opportunity to start an online business also grew.

Make no mistake, being an affiliate marketer and selling things for other companies is in fact a form of business. And naturally with more people using the internet, your opportunity to sell to that, new, larger crowd, also grows substantially.

3) This is an industry where traditional work is essentially…impossible.

Imagine a company like Clickbank, or Amazon which has millions of affiliates essentially, would force those people to work from offices to keep things traditional OR to go out locally in their areas and sell the products of those businesses to people.

It would hinder their growth in ways that is unimaginable. Instead, by providing freedom and an opportunity to earn through it, affiliates can go out, work for themselves, without having an office or space limits in general (because they are working through the internet), and thereby providing the affiliate with more opportunity to grow, and cutting costs for the company that would otherwise have to pay for things like office space, medical costs, ect…

Also, in this business, an added benefit, especially for the company employing the middleman is that their failure will not add an extra cost burden on them. It will only really impact the middleman themselves.

With all these savings that companies will have thanks to this business, and the freedom for both parties that comes along with this new form of selling, how can either party hate this or think it’s ineffective? It’s not…

4) My own success in this year after year proves this.

In 2019, I wrote an incredibly long but very high quality post on affiliate marketing here.

In it, I detail my success in this business over the years since I started, and I literally lay out what you need to do to succeed as well.

Now I have to say, that my success fluctuated and I didn’t always experience growth in this business, nor success for that matter. I literally had periods where I was losing money and going broke, but this had occurred for different reasons and here are some:

1) The methods by which success was achieved through affiliate marketing was changing. For example, I once used article directories to get easy rankings on Google and I used this to grow an email list and even directly promote affiliate offers.

Then Google destroyed the rankings of these places and countless affiliate marketers including myself had to readjust. And they didn’t just “destroy it” for no reason, they did it because those places produced VERY low quality content.

2) Article directories died out, but this gave rise to individual blogging as a new way to get rankings, something which continued and grew since 2011.

3) There were also periods where I became lazy from making money and stopped growing my site. This led to a decline in my rankings and obviously the money I was making.

But I had to readjust, and get back to work, and so I did and my profits regrew so I don’t want you to think that affiliate marketing is some chaotic world where making money from it fluctuates. There is a logic and method that makes it work and most of the people who do not succeed with it, don’t due to their own faults and/or bad training. 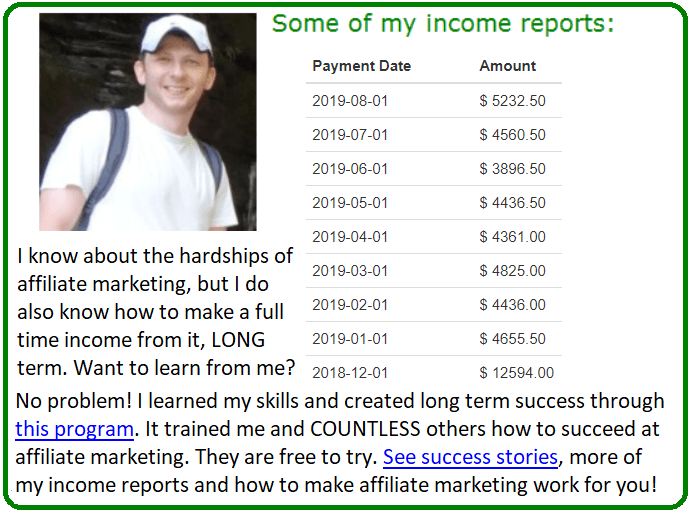 5) Success stories are very common in AM.

I even did a post on this where I shared 50.

And frankly, if you do a Google search for affiliate marketing success stories, you will find plenty, but I’m certain the ones I linked above will suffice enough for proof.

Big companies, if they want to grow, need the internet, and they CANNOT supply this growth and scale properly without affiliates. And they also can’t grow without people who know how to grow an online business either. Think about that…

Even if something happens and things fall apart, this idea of selling for other people will not go away.

But let’s imagine a scenario in which the internet ceases to exist for whatever reason. What’s to stop someone who was successful being an affiliate from being successful in the offline world?

I would say nothing. With all the knowledge I’ve personally gained about selling to people, I see no reason why a lack of internet would hinder my ability to recreate a successful business outside the internet world. In fact, here’s a sample idea:

In internet marketing, success really comes from targeting hungry niche markets. And niches which are evergreen are also great.

As an example, let’s suppose I had a site which sold self defense tips.

Now let’s say things fall apart. The internet dies and I have to adjust. What’s to stop me from selling those same items to the same niche market? Nothing really, I would just have to find them through other means, but they are there.

Niche markets in the online world are the same as they are in the offline world, the ability to connect with them is just different, but if you have the niche market and can sell to it, it’ll be possible to do the selling in an offline environment just like in an online one.

There have, in short, been MANY naysayers about what will happen and that of course would impact affiliate marketing. But I think with all the evidence I have provided with the stats and personal experience, there’s really no reason to fear that this industry will die out.

If you can establish yourself in this industry, you will insure yourself even if things crash and this is why:

Affiliate marketing has taught me how to become a successful businessman on the internet, but in the process, the same steps of success would also, as I said, apply to the offline world.

However, this is still NOT an easy industry to grow in. There are a MINUSCULE amount of people who are successful in this business.

You can certainly look at this and see it as an opportunity to take over , but I would go further and say that RIGHT now is the best time to become successful at this business.

Thank to this industry, I have learned how to create a business and the beauty is, unlike traditional businesses, I saved a lot of money and headaches on costs and learning curves as a result. Again, I see no reason why this industry will ever fail, but EVEN if it does, I’ll say it again…

More updates on the future of affiliate marketing…

These are my personal updates and things I’ve done to continue my growth and results with this business:

1) Firstly, since I began, my profits rose, fell, stagnated, all of that, but in recent years, specifically since 2013 and all the way up to 2019, rose back up and slowly grew. As I linked to above, here is the report, which monitors the income numbers I produced in this business for many years and you will see the growth I was talking about.

2) I focused MOST of my time as an affiliate promoting this program called Wealthy Affiliate, which earned me about $300,000 and Clickbank where I promoting a few products for over a decade netted over $500,000.

3) I have also actively started working with YouTube and creating videos that also engage in affiliate marketing and that has also been a positive experience (in some cases). See my results here.

If you have any questions or doubt whether to start affiliate marketing or not, make sure to begin with this program and it’ll ensure you do well as I have 🙂

26 thoughts on “What is The Future of Affiliate Marketing? A 2019 Update!”