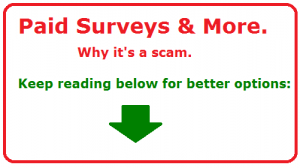 Another scam of a survey site, and another added to the long list I’ve been collecting for years. Even though it’s down, watch out for ANY paid survey site which does what this one did (and I’ll tell you about better alternatives below).

What exactly is Paid Surveys And More?

Once again what we have here isn’t actually an official questionnaire site people, it’s just a “gateway” website posing as one and if you get through it (pay for it), you will get access to the “golden” questionnaires out there that will pay you $100’s and $1,000’s a month.

Sadly though, in reality, this is a fabrication because the questionnaire sites you’re given aren’t actually all that special, it’s just numerous ones which pay the creator of Paid Surveys And More money for referring people in there so what they do is compile as many as they can find to give you the impression that it’s only the good ones, when in fact, it’s just the good ones which pay THEM well.

Furthermore, very few if ANY of those recommended places actually pay you well. To assume that you’re going to make even a $100 doing this stuff is a long shot, and one you may eventually reach, but it’ll be at the “cost” of dozens of hours spent answering questionnaires and being compensated basically nothing in the process.

Now that nothing will eventually add up, but by the time it does, you’ll probably already know that you were taken for a scam. This is the reality of this business.

Wait a second, where is the Paid Surveys and More website?

It’s actually not around anymore, but there are still people looking for it and I wrote this review for 3 reasons:

1) There are good sites that are also exposing this program as I am and they generally provide good alternatives for leading people into good sites that pay (not questionnaire sites generally).

2) There are however also BAD sites out there which are still reviewing this program, but steering people into another bad questionnaire type program in it’s stead, so even though the program we’re looking at in this review is no longer working, keep in mind, there’s still plenty of other ones like it on the internet and I hope this article will help steer you away from them.

3) As much as I write about staying away from these types of programs, people still look for them and at best, you may find one or two good ones. In fact, here are the few I would actually consider good, but I’m telling you guys, overall, if you’re seeking to make decent money from home, this isn’t the industry you should be looking at to help you there. This is the better way.

There are good ways to make money from home. But…

Survey sites are typically some of the worst programs out there. Here are some alternatives that I know work well:

Writing jobs. There are numerous sites on the internet where you can get hired by website owners and bloggers to write their content for them. Obviously, being a decent writer is going to be one of the qualifications but if you’re good at this, then you may want to consider the following places:

UpWork.com, Freelancer.com and one of my personal favorites: TextBroker.com. The last one provides the greatest chance of getting hired on, but the money you make isn’t exactly huge, though it’s still a decent amount.

Affiliate marketing/blogging. Although this also involves writing to a great degree, you are doing it for yourself here. Basically with an opportunity like affiliate marketing, you blog about popular products in specific niche topics and sell those products through links.

Each link that gets clicked on and the item gets purchased through earns you commissions, which can range from barely any pennies, to literally $100’s and $1,000’s of dollars depending on the thing you’re selling.

Example: Selling eBooks can generate you pennies, but selling big ticket items like these can generate those big numbers. This is my specialty and if you want to know how I coach people with this, learn more here.

While there are more options like these, I personally categorize the above 2 as being the best. The first one where you write can provide some quick income, though it is limited, while the second doesn’t provide good income at first, but acts as a business that grows and then it makes good money.

Check out those options and once again…

Stay away from questionnaire sites in general, even the good ones I mentioned. They won’t come close to the money you can make through the other options I recommended above.

0 out of 10 stars. The site itself is no longer working and even when it was, the program was a fake because the only thing it did was charge you for a list of questionnaire sites you could have just Googled (seriously).

My final thoughts: How I learned to make money from home.

My history in learning to create a business from my home is not a pretty one. I went through a lot of scams, and surveys were indeed one of those things.

But for me, what worked best was making a site where I blogged and promoted products, the same way I explained above to you. This is something I personally do from home and enjoy a lot. There is massive income in this opportunity, but it’s not an easy job.

However, learning to do all of that took a lot of practice and training which is not easy to find, sort of how hard it is to find a legitimate paid questionnaire website. But in any case, being open minded led me to this program called Wealthy Affiliate, which is where I learned to do this stuff.

I learned that to make money from home requires sacrifice and working a lot to achieve that convenience and believe me, it is a very convenient thing to do, though not easy to reach.

In any case, while I know you came here looking for a review on Paid Surveys And More and my score of it was not exactly good, it’s still great that you now know what you would have gotten yourself into, whether or not that program was still around or if it was another site like it. I’ve provided what I know to be a better solution and I know that may very well work as well for you as it did for me. 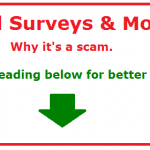 This program was a scam when it was around, so I am glad it no longer is not. For alternatives, my top choice is Wealthy Affiliate like I explained above and you can learn more here.
Click here to test drive Wealthy Affiliate risk free and get your bonuses (no CC required)