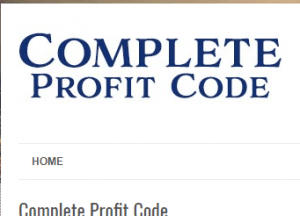 Price: $97 bucks. But that’s pennies compared to what follows (I’ll tell you how much you will really spend on this below).

So there’s 3 things going on here: This is a a fake program redirecting into another fake program that goes into a program whose prices are hard to fathom…

Let me start by saying that finding real work at home opportunities online is extremely difficult, especially when you have programs like these popping up, disappearing, then popping up again in droves and unfortunately, these ones are the majority you’ll find online.

Fortunately, you stumbled onto this review so you’ll know exactly what’s inside this program (it’s actually a fake site), and what you’re really getting. Furthermore, I will be providing you with an actual legitimate alternative and here it is:

Cracking the code of Complete Profit Code. What is it?

As of 3/23/18, this program is basically a fake website and a made up name all linking to a scam site I’ve reviewed before. I even purchased what was inside that site so I know what this will all lead to.

But let me specific and give you the 4 step ringer you’re taken through:

So as soon as you get involved with the program I’m reviewing here, you will be taken through those 4 steps as you progress from one site into another.

There will be numerous checkout carts and up-sells as you progress through the first 3 parts of this scam and eventually, this whole thing will lead you into the MOBE program I talked about. That is the “end game” here so to speak because that’s where all of these fake programs are trying to steer you into and only because that program pays them a lot to do it.

My experience with all of this:

As I said above, Complete Profit Code steers you into Automated Daily Income and since I have already purchased that before, I have more than enough credibility to review it, PLUS I actually know about this business because it’s actually my job.

Now this isn’t the only time I’ve had this experience. In fact, in the past month or so, I’d say I’ve had 7 of these same experiences in which these fake sites led me into Automated Daily Income and through that, into MOBE.

There are many programs out there pretending to be legitimate ones, but actually turning out to be affiliates for this big MOBE company and thus far, I’d say Automated Daily Income is the most successful at doing this since it’s so common to run into these days, at least for me.

Beware: There’s tons of people promoting in this fashion…

There are MANY programs, websites and individuals promoting this MOBE program across the internet, some are doing it legitimately and others (like Complete Profit Code) are doing it in the sleaziest ways imaginable, and ultimately these low ratings I give out to are to the people, websites and fake places that promote MOBE in the deceptive way that they do and not the program they are promoting.

It is an absolute disappointment that people have to go these lengths to promote a company to make money because telling lies and promising quick money to people when the opposite is true is leading these people down a financial road where they in most cases probably can’t afford to pay as much as this whole thing costs.

Who has an extra $100, an extra $1,000 and even $10,000’s to spend on a risk which may or may not pay them back and more? Very few people, but these fake programs which promote this expensive MOBE company are leading people to think that the money making process is easy, automated and they have to do nothing.

Take for example, this sales page that promotes this fake program and how they try to use sleazy words and misconceptions to make you think it’s easy: 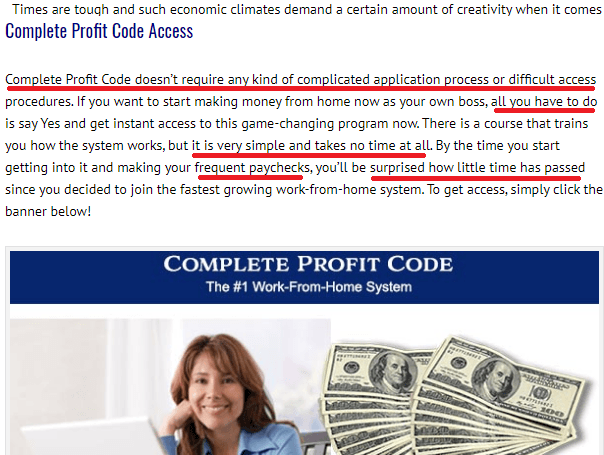 And that’s just 1 paragraph of numerous ones on the sales page which talks in that manner. People, it’s all marketing and they are using words that stand out easily to your eyes. Word like getting rich quickly, easy program to use and making you think that money is going to come in easy.

And let’s add to it that the woman in the picture is a commonly known to be used in these fake programs and it’s never the one who made it. So by hiding behind that image, the real person who is marketing this whole thing is already lying in one sense or another.

Overall, there’s a giant web you’re lead through which is hard enough to understand on it’s own, and even for me who has been through this web time and time again (I do it because I expose them in the process) and the program, MOBE and it’s reputation is being quite tarnished in the process because of people who promote it in the way that they do…

But anyway, now that’s I’ve explained pretty much everything I need to about this whole thing, let’s wrap it up:

0 out of 10 stars. Layer after layer of fake marketing that this program engages in destroys the credibility of the end program being promoted. Like I said, Complete Profit Code is fake in more ways than one and that makes it a scam.

As long as there’s big companies like MOBE paying big money for their affiliates, there will be a branch of those affiliates who market the program in the sleazy ways the person behind Complete Profit Code and Automated Daily Income do (among the many other sites I’ve discovered like it).

Whatever you decide to do, I am here to warn you about the financial risks involved with this whole thing and also want to tell you that making money online is NOT easy, though it is possible and very rewarding. I just personally believe programs and sites should be honest about all of this and not try to lie to get you in there.

Trust is a huge factor, if not the most important in these business transactions. After all, you are looking at huge investments and sites like Complete Profit Code aren’t telling you about them until you are faced with them. That’s just wrong.

In any case, my personal opinion is to not get involved with Complete Profit Code at all. Instead, this program (Wealthy Affiliate) will be a better option, both in results AND in costs. Here’s the quick rundown:

I hope I was able to clarify the Complete Profit Code “program” for you and answer your questions on it. If there’s anything else you are wondering about concerning it or Wealthy Affiliate, let me know. 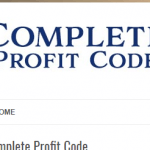 The Complete Profit Code in my opinion is a complete scam, so here is what I recommend that is NOT a scam and really works.
Click here to test drive Wealthy Affiliate risk free and get your bonuses (no CC required)