Automated Daily Income is a program I not only purchased, but after refunding it, ran into it again and again while doing other program reviews.

In this article I’ll explain why that was, why I refunded it when I first got it and the major scam program it was all tied into with that ultimately made it impossible to recommend. 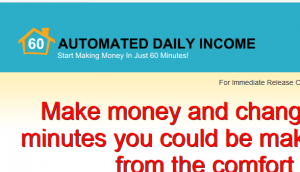 BUT even if you don’t get that, you’re looking at future up-sells as you go through the program that bypass $2,000 and even more as you proceed!

A gigantic NO from me. This system is a cover for another system that I am not a fan of (because it’s so expensive) and the further you go through this whole program, the more crazy expensive it gets.

We’re talking tuition level fees (yeah it can get that crazy).

So what is Automated Daily Income? Before we get to the red flags:

In order to understand this program, I have to explain what it’s tied to and it’s a program called MOBE which is an “educational” program that teaches you to make money online and allows you to promote it if you become an affiliate for it.

The starting price of it is $49, after which you enter into a 21 step training program showing you how to make money online selling the actual system. Now as you progress through that 21 step training, somewhere in the lessons, in order to go further, you have to pay $2,000.

If you pay that, you will go further into MOBE and eventually be offered even more expensive up-sells that make that dwarf that $2,000 figure. 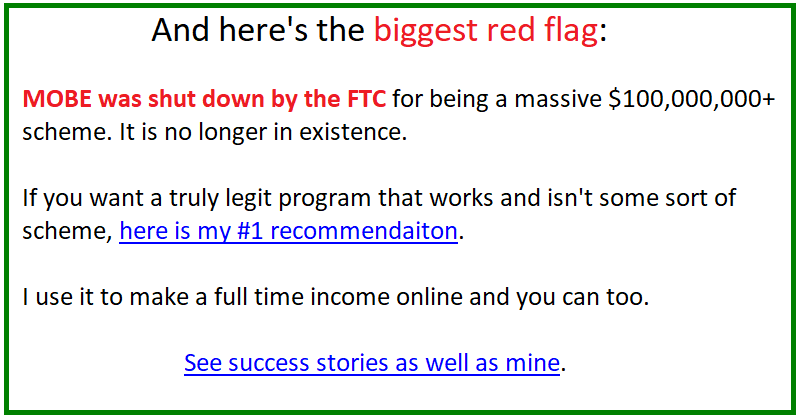 So where exactly does Automated Daily Income fit in with MOBE?

Well the owner of that program promoted MOBE and when you paid the $49 (you may have guessed it already), then you basically became a starting member of MOBE and I’ll tell you what:

I actually did read through the terms and conditions and saw that MOBE was indeed mentioned. In most cases, this would be enough to make me hit the back button as I have a lot of experience with this particular topic, but I wanted to give Automated Daily Income a chance.

Here are your 5 red flags I promised:

Note: These 5 red flags are from a past review on Automated Daily Income, before MOBE and the whole FTC thing happened.

At least not the picture they claim is hers. You see, the sales page of Automated Daily Income is really more or less a duplicate of similar type sites I’ve reviewed before, which in most cases were scams.

The same exact picture you see on that site, I’ve seen on numerous ones and to give you a simple comparison, here’s the same picture (sort of cut of because it’s a screenshot) but the text in many instances is the same, but you can see, the picture is an exact duplicate:

On the left, it is associated with a program called “Increase my Bank Account” by Kelly Simmons and on the right, it’s Raena Lynn of Automated Daily Income.

And like I said, this is like the 2 dozenth time I’ve ran across this, because again I review many work at home programs and I see this exact same sales letter, very often, especially on work at home special report sites that are normally scams, so it’s nothing new to me, but it is a major red flag you need to know because it’s misrepresentation…

2) The $49 price is just an application fee (the start of spending more).

And then that leads you into up-sells and more requirements to meet.

I assume when you buy anything, you expect a fair value return, no? Well that doesn’t appear to be the case here.

When I purchased Automated Daily Income, I had to go through 2 up-sells and by the way, these up-sells are NOT part of the MOBE program I told you about earlier (The $2,000 one and up), they come before you even START the MOBE program:

You are absolutely free to NOT buy any of them, but they always do a good job in making you think you need it. But moving on…

After you say no to these up-sells (like I did in my case), you are taken to the MOBE welcome page! And what is on that page? A video welcoming you and a questionnaire to answer (by the way this is when I found out my $49 cost was a fee): 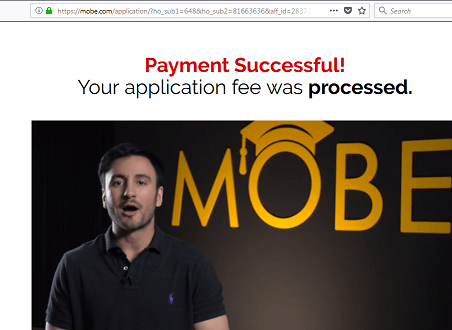 This is where I had to stop because I saw no more value in Automated Daily Income. All I basically purchased was an entry to MOBE and that was not what I wanted…

While I dislike MOBE a lot, this red flag is entirely on Automated Daily Income and the person who made it (and no, it was not Raena Lynn, I’m sure of it).

You can join MOBE on your own if you wish (well not anymore) and what people like the creator of Auomated Daily Income have done is, they created an illusion of a program (Automated Daily Income) to sell you MOBE and get credit for it.

On top of that nonsense, they also have the audacity (yes I said audacity) to offer you coaching up-sells BEFORE you EVEN get in through the front door and before you even know what is going on. This is a VERY dirty tactic in my opinion that is unfortunately utilized by many online marketers and it’s very shameful…

Let me tell you this:

I have my own personal opinion of this program and it’s not very positive (mainly because of it’s prices and the FTC take down).

I’ve come around to being a bit more lenient on my opinion of it, but I also am firmly sticking to my position that anything that costs anywhere close to what this program charges is absolutely too much (it’s absurd high ticket scheme levels), at least for me and I do online work full time too so what I’m getting at here is that as someone who makes money online, you absolutely do not need to pay this kind of crazy money.

The “benefit” if you will of buying into the MOBE program is that as you invest more and more money into it, you are able to re-sell that program and earn what is basically high commissions. I however, do not like that type of system and don’t believe the price justifies the cost (on any level).

This very kind of system is why the FTC had to take it down and this was the second time it did it (the first time was with a program called Digital Altitude).

5) The backdoor tactic this program uses to promote MOBE is always a red flag.

This is more than anything else, another argument against Automated Daily Income. I have found numerous programs like it (Online Profits Breakthrough for example) that use the same tactic of giving you the impression you’re buying one, program, but it actually turning out to be a backdoor into another, in this case, MOBE.

As soon as I see a program do this type of stuff, I immediately assume they are hiding something and that already pushes me away.

If I’m going to promote something I like, I will straight up tell you what it is and what you’re getting, not try to be deceptive about it, make up my own program name, then try to get you in, that’s a bad sign…

1 star out of 10. MOBE itself would actually get more stars if it were still active, but we’re reviewing Automated Daily Income here, not MOBE, and the fact that they are using these back handed tactics in my opinion (and that you only find out what you pay is a fee) is ultimately why I rate it so low.

I find programs like ADI tough to review because I try my best to find the best sides of it and explain it, but in this case, we have a backdoor program, you aren’t really given anything of value for $49, but a processing fee into another, more expensive program, and they try to get you to buy their coaching before you even make it that far.

You don’t get a chance to test or try anything out and it’s a messed up type of system in my opinion that I would never recommend. When it comes to online programs that teach you to make money, you absolutely need to know what you’re buying is legitimate and worth the price, and often the starting point of that is TESTING it out, ideally for free so you can see what you’re going to be investing in.

To risk so much, so early, without getting a proper test “drive” so to say is too risky and knowing how programs like Automated Daily Income operate, it’s further pushing me to never recommend it.

And on a final note, in regards to MOBE, I want to say that it did offer good education, but the price of that education was beyond comprehensible in my opinion and I’ve come to understand that this type of education isn’t exclusive to this program. I’ve found out many of the things it teaches (and even more in some cases) from other, free sources.

For example, I’ve gone through the first 5 steps inside that program before and all they really teach is called affiliate marketing and the income potential of it. I can hop on YouTube, Google or you can read my site and get plenty of info on that, for free. And I can also tell you that I do affiliate marketing full time, so I know this formula more than well enough to teach, for free, and the alternative program I am showing you does that.

But that’s enough of that, I hope this review has been helpful to you 🙂 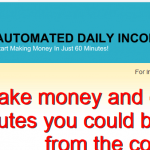 This program promoted a scam, end of story. Here is what is a legitimate program to try instead.
Click here to test drive Wealthy Affiliate risk free and get your bonuses (no CC required)