When I found out what Online Profits Breakthrough was really trying to promote to me, I realized it could cost me more than college and I’m not kidding about that. Read this review and you’ll understand why this program got the rare but necessary scam rating! 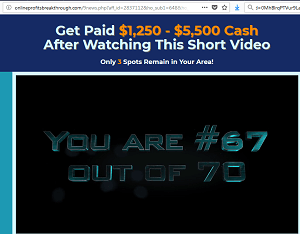 Price: $97 upfront before the real upsell starts, the MOBE upsells, which lead all the way up to the college level prices I talked about ($10,000’s).

And MOBE is now finished (FTC stopped it!).

Overall Rating: 0 out of 10 stars. Big red flag in my opinion.

This program is really nothing more than a gateway to the 2 big upsells I mentioned above.

The owner of this program is pitching it so you can sign up under him and make him more money, but to be fair, signing up to those 2 programs also lets you promote them to other people.

The main point I want to stress here is that I am completely against both MTTB and MOBE (and I’ll explain why) and why signing up for them is a very expensive experiment with few chances of success in my opinion. You’re much better off investing your time and especially money in FAR LESS riskier places, namely:

Online Profits Breakthrough in a nutshell:

Mathew Dixon’s Online Profits Breakthrough is really an affiliate program that was meant to get you inside a program called MOBE and it’s a program I’ve been highly critical of to say the least.

MOBE in general was a VERY, expensive, high ticket marketing scheme that taught you to create an internet business for yourself. It offered an affiliate program for anyone who is a member to re-sell it to others, which is exactly what Mathew appeared to be doing. He probably purchased this program and decided to promote it and he does so through Online Profits Breakthrough.

But the $97 initial purchase gave you access to Mathew’s training, which is basically networks where you buy traffic, send them to your affiliate site promoting Online Profits Breakthrough and/or MOBE and make money from it. But let me tell you, experience has shown me it is never this easy.

When MOBE was still around, here is what was going on:

You would buy into Online Profits Breakthrough for $97. And this would get you into MTTB, which was also known as the first stage of the MOBE program where you go through 21 steps of learning how to build an internet business (here is the legit way).

However, on step 6 (and I personally know this from actually purchasing and trying out the first part of MTTB for about $50), you get an up-sell page for about $2,000 if you wish to go further. And if a $2,000 price tag isn’t enough to deter you, then the further you go into this program, the more parts of it you will have to pay for, and it’s a lot more than $2,000 and then later on, further in MOBE, it’d be even worse.

Hence this is the reason I said there’s college level prices in this thing and while some people feel it’s OK to pay such a price for “internet marketing training”, I would disagree completely as I know of real, legitimate alternatives that teach you the same things and even better for measly prices (free to try): 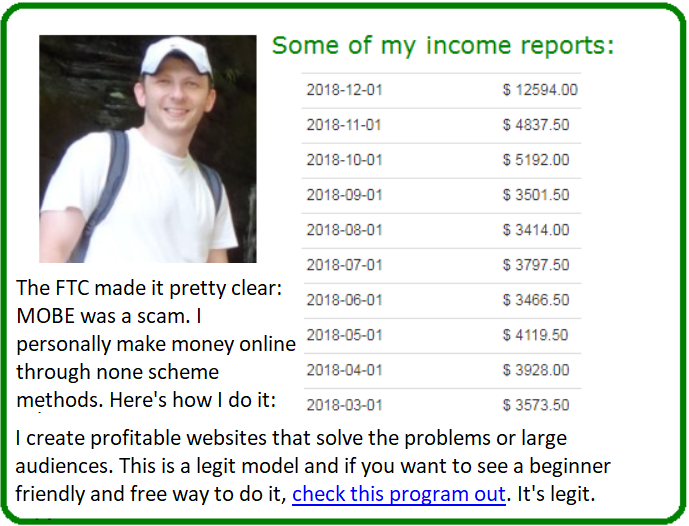 What exactly did MOBE teach you?

I did say internet marketing training, but what exactly do I mean?

Well the lessons I got from my time learning from it were basically general ideas of how to sell stuff on the internet. In addition to this, there is also an alluring offer made to you which is the affiliate program of MOBE, but the catch is, you have to pay for the big ticket stuff (the higher level things) if you wish to promote those higher level things. And this is what I assume the owner of Online Profit Breakthroughs did.

In general, many people who enter into this business re-promote the same training program, for the same prices in order to make BIG commissions.

Hence why if you look at the Online Profits Breakthrough sales page, they kept mentioning commissions of over $1,000 to even about $5,000 I believe, which is possible if someone YOU refer into the program buys one of the more expensive training packages.: 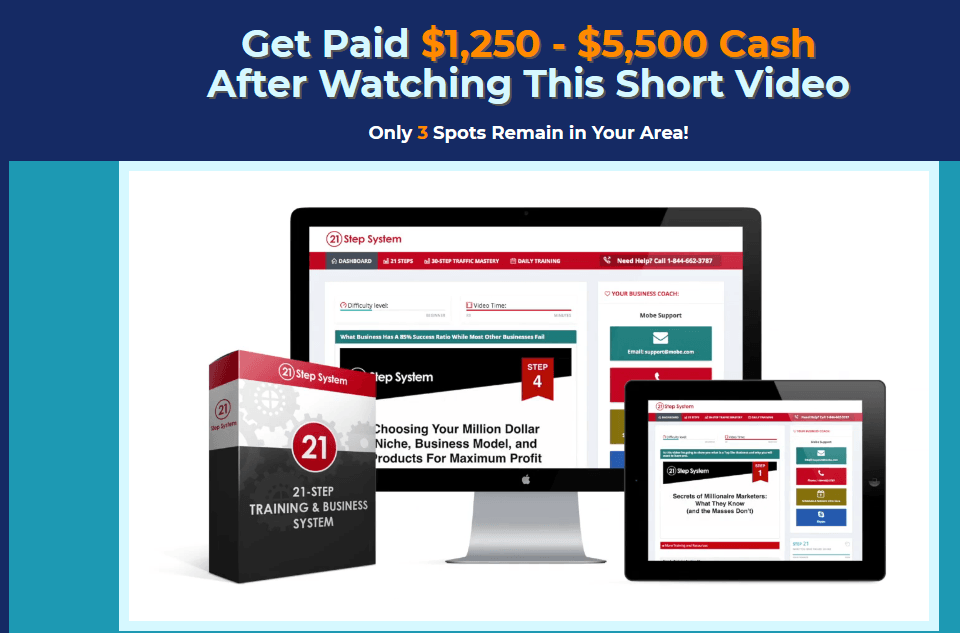 Are you fine promoting this? I’m not.

While I possess extensive internet marketing knowledge and have build multiple sites/businesses out of it over the years, not once have I been seduced into promoting high ticket programs of this kind, mainly because I never believe the training fits the outrageous price they charge. And I don’t care how much I can get paid.

That and the fact that many people who buy these programs probably don’t have the kind of money needed to invest, so they really go “all in” and many people usually don’t do well. And this is not really a testament to saying MOBE or Online Profits Breakthrough is a scam, it’s just that in most cases, whenever someone takes a big risk like this, very few people manage to come out on top.

But there is also an argument to be made for the idea of what I call “shameless promotion” and it’s a form of promoting these types of programs, lying about them and trying to give potential buyers the impression that they are about to buy a proven to work formula that’s “easy” and will make them “quick money”.

Sorry guys, but in my 12 years doing this, I still have yet to find such a thing. But…

Shameless promotion. Is it going on with Online Profits Breakthrough?

I absolutely believe so. From the moment I landed on the sales page, there were immediate “testimonials” bombarding my screen of how awesome of a program this is.

And here’s the shameless part: I recognized a number of these testimonials as being paid testimonials from a website called Fiverr and frankly, I see this type of thing happen a lot.

The common claim I take and make from this is that if you need to pay people to glorify your program, then your program is not glory worthy as far as I’m concerned.

Then of course, the claims of easy money and working for little come into the picture and I’ll tell you this much: For most people who get into this type of business, nothing could be further from the truth.

There are indeed people out there who work very little and make a lot, but only after they actually have made it. Newcomers will always need to work very hard to get to that level and don’t let anyone ever tell you differently.

0 out of 10 stars. There’s no real breakthrough, it’s just a “shameless” promotion attempt in my opinion to try and get you into buying very expensive stuff to make the original owner big commissions. While you do get to do the same, it is not a way of making money I am comfortable recommending as many people lose big money on this risk.

I really, really dislike anything that is promoted the way Online Profits Breakthrough is. It is a cheap attempt at getting people to sign up in droves to make them spend a lot thinking they’ll make it all back and more with little effort.

Such a deceptive tactic is known very well to me as I have made the mistake of trusting programs like these in the past and I’ve paid the price for it. While opportunities exist in joining this program and promoting MOBE, like I said, I will never be comfortable promoting a program that tries to get people to spend such outrageous prices.

Education this day n age, especially the internet marketing kind is readily available on the internet and even free on Google, YouTube and many blogs, like mine. But if you’re truly interested and/or serious about building a business from home and on the internet, where customers actually trust you and seek your advice/recommendations, Online Profit Breakthrough is not the way to go in my opinion. My alternative however is and here’s a breakdown of why:

That’s my personal recommendation and it’s come from years of falling prey to the types of scams that promise people so much and that end up making them spend a lot. I’m totally against the prices pitched by Online Profits Breakthrough and feel people need to be given a risk free tour/test drive of a program before they are asked to invest even a penny.

You just won’t get that with this program, you will however get that and much more with my alternative:

If you have a personal opinion that you’d like to share on this program or MOBE, please leave it below! 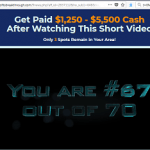 Since there is proof this program promoted a scam, here is a legitimate alternative program that I recommend instead.
Click here to test drive Wealthy Affiliate risk free and get your bonuses (no CC required)

10 thoughts on “Is Online Profits Breakthrough a Scam? It Can Cost a Lot.”