I’ve purchased multiple programs from Michael Cheney including Commission Machine, which I am reviewing here. Let me explain why I don’t recommend this or any of his other programs and why.

Then there’s also 2 up-sells include a “golden ticket” product for $197 one time or $27 a month, that is then down sold to $124 one time and $17 a month were you get some pre done commission money machines followed by a second up-sell for $97 where you get a similar thing but with a few different bonuses.

After looking at Commission Black Ops which was also created by the same person, I found a lot of the same information on both products. I will say that I feel there is slightly more useful information on THIS product that the other.

But I still gave it a very low rating (I gave 3 reasons why below). And since I don’t recommend any of Michael’s products, here is an alternative: 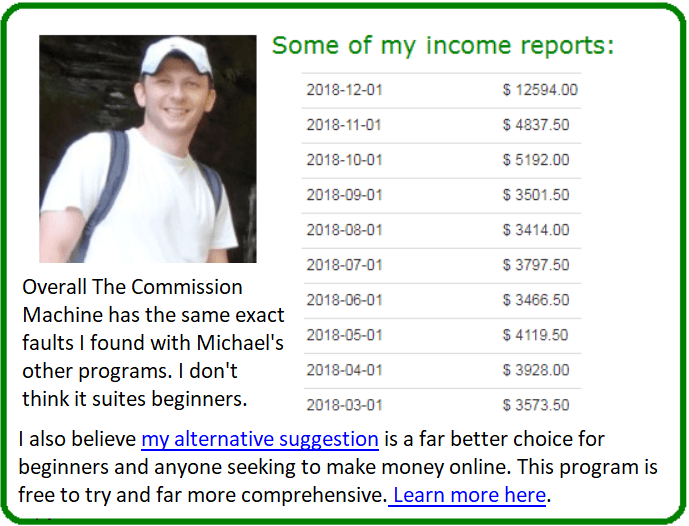 The Commission Machine in a nutshell:

It is an 8 module training program + up-sells.

The 8 modules basically explain a lot of the same things Michael Cheney’s Commission Black Ops (CBO) did (Getting traffic from posting on Facebook, then sending people to opt in pages or affiliate promotions).

The actual Commission Machine is really just another word for a marketing funnel you make to get sales. It can include a sales letter, an opt-in form, a follow sequence of emails and other things to keep sales coming in.

There was one thing that was very different in this product that I did like and I will cover when I go over each module (it’s in module 8). The other thing that was different and unfortunate in my opinion was just how often Michael kept trying to sell people to his other promotion within a welcome webinar video he did.

The same thing happened with CBO, but I felt this program tried to do it a lot more and I did not like that at all.

Because I joined as a basic member for the $19.95, there are many things in the above menu I could not access:

Webinars of which there are 14 and Done For You. You need to purchased one or two of the up-sells Michael pitches to you after you make your purchase to get access there.

The only things that are available are the home menu where Michael Cheney gives you an explanation of the same strategy he explained in CBO about Facebook and then goes into a long pitch into selling you more stuff. You can read about that pitch from the review I did on Commission Black Ops, but here is proof he does the same thing on that program as he does there.

Here is a screenshot comparison of part of these webinars on each individual program going over the same thing:

The only thing is, in CBO you can fast forward and in The Commission Machine, you cannot.

Now besides the Earn Money menu where you can sell this product, the real training comes from Core Training. You (will also see the organization of the names of the menus is set up identically as in CBO).

Anyway, within that last area is where you get the 8 modules and really the only training of this program. So let me

explain what you learn there:

You get an intro video where Michael explains his approach to making Commission Machines through his “R.A.P.I.D Income Formula” . The continuing modules cover each letter…

This is where he covered the R of R.A.P.I.D which is Research. Michael explains a few sites where to find a list of incoming products into the internet marketing product so you basically do some launch jacking for it.

There’s few programs that ever explain these things, but Michael is right about suggesting that people in the make money niche try to promote new products since they are going to get traffic.

Basically one of those sites is JVZoo’s hot seller’s list which you can Google. I use that site all the time as well as MunchEye which is also recommended. These aren’t exactly top secret sites and many marketers including myself know about them.

What you should do is find products there, review them and/or promote them on your site is you have a blog on MMO. But the way I would do it is through this approach to making money online vs Michael’s which will be through FB.

Here we cover the A which is “Angle” or basically the angle you use in email sales pitches to get people hooked and to buy your stuff.

Unlike the other modules which covered 1 letter a time, this one covers 2, P and I which in this program means providing incentives on a sales page. Things such as bonus offers, countdown timers and things that make people perceive more value if they buy.

This module talks about messages in the email title and body awhich I found to be similar to module 3.

The last letter is D, which in this case means deploy (A reference to CBO maybe?) which I figured is supposed to be the part where you learn how to START with this, but it’s really just a strategy of how to email subscribers so they buy.

This is where Michael shows you how to make money without a list and it really goes back to his FB strategy (read the review on CBO to find out what it is). What he does is he copies one of his high selling emails into a FB post and then from there sells the product.

Here Michael explains how to make more sales and I believe increase your email list by adding you autoresponder code within products you promote on JVZoo. Apparently there is this feature where on products that you promote where if people buy it, they can be added to your list and you can send them a personal follow up sequence of other offers.

I never knew this existed but it explains why I get so many junk emails from marketers whenever I buy things on JVZoo. I believe this strategy can only work where instead of constantly selling people stuff after they buy, you give them free and valuable information to really make them like you and then you can give them something.

2 out of 10 stars. There are 3 major reasons I gave Commission Machine a bad rating:

1) Frankly, I did not like that I paid almost $20 for 2 programs that are basically similar in my opinion and it is the reason why I changed my original review of CBO from 3 stars to 2.

2) The strategies here seem to be missing some important things which if you’re a beginner will in my opinion be very tough to comprehend (this is a far easier guide). Most of the program is about selling and very little to do with getting traffic, other than FB strategy.

I was once open to it, but frankly, I believe this is not going to work fast if you’re a beginner and have no reputation or following on FB. It works for Michael because he has those things. For a beginner, it’s going to take a lot of time and there’s no training on doing this.

3) Webinars that really go into other sales funnels: I am really getting tired of buying programs and seeing webinars that welcome me try to do their best to lead me into the next hot thing on the market rather than giving me value.

In this program and like in CBO, it was done the same exact way. And it was probably going to be a high ticket promotion. I didn’t buy this program to be pushed into the next, I purchased it because I though it would be good to recommend to other marketers.

So basically if you take a summary of the 3 things I didn’t like, in my opinion this program (and CBO) basically:

The only good thing is really the sales letter set up which can work but that comes at the end of the sales funnel, first you’ve got to get traffic like I said before and I don’t feel this program does a good job of showing this, hence why I recommend the alternative program instead because unlike The Commission Machine which I found incomplete, this one called Wealthy Affiliate is complete. 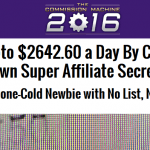 I do not recommend Commission Machine at all. I do however recommend this program that has far more value and gets amazing results.
Click here to test drive Wealthy Affiliate risk free and get your bonuses (no CC required)

9 thoughts on “The Commission Machine Review. Why I Don’t Recommended it.”