Anthony Morrison’s programs have a reputation in my book for generally being poor. Is Inner Box Circle different? Is it a scam? Let this review show you.

Price: It has 2 options at the start you can buy, but if you click the back button, you can get it down to $7. Then you have a lot of up-sells that are sold for a high price initially (a few hundred altogether) then down sold if you don’t buy them.

I didn’t buy any of them because I’m used to Anthony Morrison’s ways (which I’ll explain) so I figure I’d lose the minimum ($7) just to let you know why the program is not recommended.

There is stuff you can use in this program which is given away as bonuses, but if you’re new, you will be led to believe you need to buy Anthony’s things to get started which is just not the case!

Anthony Morrison has not changed his ways and I’m going to show you why everything he sells is more of a hype thing than stuff you can use. And this is unfortunate since this is the poor reputation I eluded to earlier that I encounter with pretty much every single program of his I’ve reviewed (for years by the way!).

Inbox Inner Circle in a nutshell:

However, while it is easy to understand, you’re going to be taken through things you’ll need to buy to basically “activate” the system and the stuff you buy is promoted to you by Anthony, meaning he gets money and I wouldn’t have an issue with this, but I don’t like this particular way of upselling. I think it’s unethical.

The way he sets up the system of Inbox Inner Circle is actually one of the “right” ways to do it and he gives you a lot of bonus things such as follow up emails, videos on how to communicate with subscribers to make sure you make money and more, but it doesn’t have to be done the way Anthony leads you to believe.

His way will cost you more and lead you down the road of immersing yourself within his other products and offers, many of which are scams and I want you to avoid that entirely (as well as this program too).

What $7 gets you with Inbox Inner Circle: 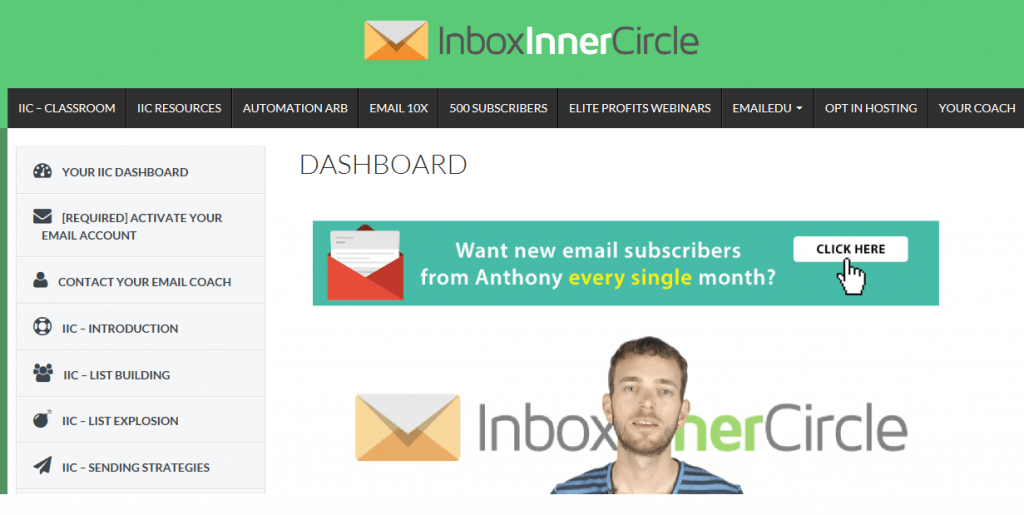 There are 2 menu items, one on top and the other on the side. A lot of them are exactly the same so if you click on one above, you’ll be transferred to one below so the best way to review this dashboard is to only talk about one of the menus in the upper area and then go over the side ones.

The only top menu that I found important is the 500 subscribers you’re supposed to get when you buy the program, but this is Anthony Morrison which means you’ll have to pay in one way or another and with this “bonus”, you have to register with an autoresponder program to get this list, which does cost money.

I’m not even a believer in this list either. In my opinion any list that is given away like this isn’t going to make good money.

Now the side menus:

1) Your dashboard: Just an intro video from Anthony. He does mention that his system is not a get rich quick scheme which while is good to say, does not redeem him in my eyes.

2) “Requirement” email account: This is that same sign up you need to go through to get the 500 emails. But there is a 6 step series which starts with the registration of the autoresponder, to then getting a domain and hosting, all of which are going to cost you money, which again Anthony is making.

Some of the steps will give you things like a 90 day follow email blast and at the end of those 6 steps, you will have the option to claim those 500 subscribers (but only after proving you followed all the steps).

3) Contact your email coach. Out of all the things I have criticized Anthony for, this is probably the biggest and worst. One of the first programs I ever reviewed from Anthony (called Success With Anthony) had issues with people getting sales calls from people claiming to be coaches so they can sell you some really expensive things.

When you first buy Inbox Inner Circle, before you get to the dashboard area, you’re going to have to fill out a questionnaire. What I absolutely hated about this is that I believe 100% that it’s a charade.

They make you think you’re applying for some sort of thing where you need to “qualify” as though there’s limited spaces.

I don’t believe this for a second! They just want you to think that, but you’ll still be getting calls from people who will want to sell you as much stuff as possible.

Do you want truly legitimate coaching to make money online?

4) The rest of the dashboard is:

A combination of free tips for email marketing and buying strategies to build a list and sell to. Stuff I don’t really feel like I need to mention in detail because it’s very basic.

2 out of 10 stars. I do not advise jumping into this program. It’ll make you think you need stuff you really don’t and again, it’s an Anthony Morris program so there’s bound to be something hidden somewhere. That’s what I’m used to which is why I’m staying away. I may not trust Anthony’s programs, but there is one program I do called Wealthy Affiliate.

Before I purchased Inbox Inner Circle, I knew of Anthony Morrison as well as his brother, Adrian Morrison who runs a program called Social Commissions. And none of their products have ever been given good ratings from me.

I think I might have rated one as decent, but overall the reputation these guys have developed with me, particularly Anthony is not good.

And it all turned out to be true as well as other things which really made me angry like his coaching funnel. He hasn’t changed and neither will my opinion of him and Inbox Inner Circle. I can confidently say that I am not recommending this program at all!

This program, Wealthy Affiliate on the other hand, is what I am recommending.

I did say charade a few times and I do so because Anthony always seems to market the same way and that’s a way I do not like and ends up costing you more than you should ever be spending. 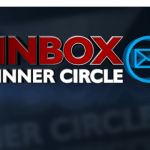 I did not see much value in this program and believe this is far better for you to learn this business from.
Click here to test drive Wealthy Affiliate risk free and get your bonuses (no CC required)

7 thoughts on “Is Inbox Inner Circle a Scam? My Problems With it.”