About HALF of the programs I review always try to have you believe that if you just tweak your site’s settings and a few other things that it’ll magically hit first page positions without much content.

One of those “tweaks” is the exact match domain myth and if you just use that tip, you’ll already be farther ahead than most others. But does it really matter?

The answer is absolutely not.

I’ve tested this with numerous websites and read from a lot of people that prove it, but the way I’m going to prove it to you is I will show you a couple of exact match domain (EMD’s) websites I have that didn’t get ANY bump in the rankings just because they were EMD’s. The ONLY way they managed to get anywhere was when I began loading them up with unique, quality content. 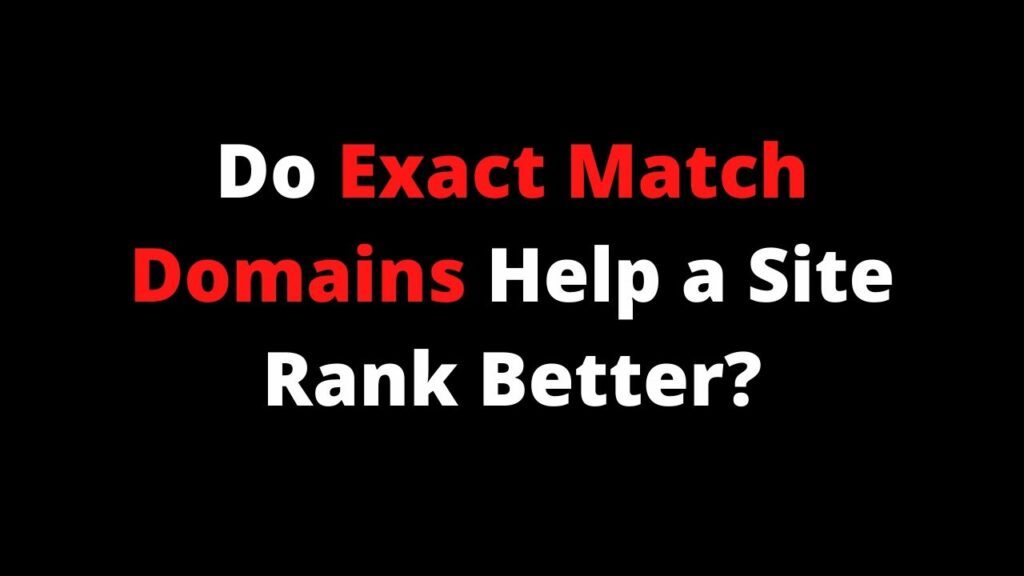 What is an exact match domain (EMD)?

It’s just a domain name you buy that is spelled out exactly the way a keyword is. If you know anything about keywords, it’s that the more popular ones are always sought after by marketers of all sorts.

Managing to land on the 1st spot or 1st page of Google for a keyword that gets numerous searches every month is almost guaranteed to be a money maker for you. Keywords still hold very high value among marketers and are still a very good indication of how much visitors you can get, but a few years back, a lot of people discovered that if you just name your website exactly the same way as the keyword you’re chasing, you’d get more value and higher rankings for that specific term.

Products sprouted around this idea and began teaching it over and over again. But this information became so common that any product that charged you for this information was just ripping you off. Anyway, the big key to making EMD’s work wasn’t just in finding the keyword, but also seeing if the competition was low enough for any website you’d make under the actual term pop up.

From there a few tweaks in your website such as making silo pages on the website to give the main one weight and editing meta tags and somewhat “spamming” the keyword in certain settings of your site made it easy for search engines to spot it and rank it. But that all pretty much came to an end around 2012.

If there’s one thing you should know about Google, it’s that it always tries to improve it’s search and the main thing they always aim to do is give it’s users (the people who search on it), the most relevant page/s that answer their questions.

Unfortunately when the EMD trick was popular, too many people abused it, got high ranked websites and littered it with garbage content, most of the time just trying to sell anything. You even had many websites that abused the EMD perk and sold things that had nothing to do with the keyword they were landing on.

Littered is also the same word I’d use to describe how often these bad websites would land on Google and give people things they really weren’t looking for and so back to what happened, Google put a stop to it.

What they did as far as I know, was that they removed the weight any EMD had for just being that and began grading websites for other metrics. This really cleaned out their search engine of the bad websites and this has been the trend even since, all the way to today in 2016. Yet there still people pushing that EMDs are still the way to go.

So a little bit before the whole EMD game changed, I was involved with SEO and it was through a program called Bring The Fresh where I first discovered about that perk. I will admit that it did work for a bit for me, but only until Google stopped it.

I was a stubborn man at the time and still kept making websites as EMDs in hopes that I could still make it work, but it ended up being a major waste of time. All I really needed to do was sit down, work hard and put up some great content on my website.

I have 3 exact match domain websites. One has about 30 posts worth of content on it, the other around 20 and the last one a little over 60. I am mentioning the amount of content on each site because THAT is what plays the most major role in ranking, even though they domains themselves are titled under popular keywords.

The way I will show you these websites is by showing you the keyword they are aiming for and it’s competition, followed by the traffic stats each one has:

The first one is chasing the following phrase (the EMD worked here):

I purchased the domain with that same exact keyword. And guess what? For many years it was ranked on the first page of Google.

In fact, I did make money from this site from what I considered a micro niche idea and it was about $10,000 over the years. Yet this wasn’t necessarily because the EMD perk worked, but because the competition was super low.

Next site: An EMD site that has about 30 posts.

Nearly 500 searches and the competition is also low, but higher than the previous site. But in spite of the low competition, when you do a search for it on Google, you won’t find it on the first 20 pages and me having about 30 posts of content is NOWHERE near the amount I’d really need to get closer to the 1st page.

Yet, to my surprise, when I looked at the traffic, this is what it showed me:

The site STILL has a good amount of traffic and I have not looked at it for a VERY long time. I actually forgot about it until this case study idea arose, but I am shocked to see that it’s still active. There’s still so much I can do with this niche site! I also made a case study on this hot niche site at one point, but back then I was more active with it.

This new revelation is huge for me. I only stopped with that site because I stopped enjoying the topic, but there’s still much I can do with it. I can technically sell it for a great price. Or I can keep using it and make money in affiliate sales.

But does it answer the EMD question? Yes it does. I don’t rank for it’s main keyword and it only gets visitors because it has content.

Last site: Has over 60 posts and also uses an exact match domain.

I currently am ranked on the 3rd or 4th page for the main keyword so that should tell you how much weight EMDs do NOT carry anymore. For a keyword with such small competition, you would think I’d have a higher position if the whole EMD theory was true, it obviously isn’t!

BUT because it has content and really a lot of it, it does have excellent traffic stats:

Even though I don’t rank for the keyword my domain is under, the traffic is obviously coming from somewhere! It is coming from other keywords I have found and written content on.

The main point is that you shouldn’t rely on EMD. Instead this is what counts:

Today, if you type in “how to lose weight right now” you will not get my site on the first page of Google. In fact, you probably won’t find it on the top 3 pages for that long tailed keyword either and that’s because the EMD perk is no longer working for me, so what I am left to rely on for rankings (as it always was) is the quality of the content I write on this and the other sites I showed you.

Ultimately, quality content is what matters, not the EMD:

People still ask me today about using EMD’s and considering how many different keywords there are, how they fluctuate in searches and how many LSI varieties there are, and mixing that all in with the fact that EMD’s carry little to no SEO help these days, I wouldn’t even think of suggesting you use it when choosing your own domain name.