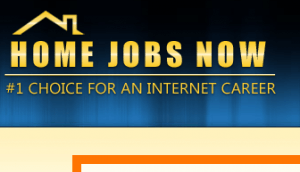 Home Jobs Now isn’t the type of program I’d trust to actually do what it’s title say and in this review will explain why that trust isn’t there.

Home Jobs Now in a nutshell:

This program is just renamed from a different scam/s I already had bought. You can change names all you want, but if it was a scam before, it will still be a scam no matter how many times you try to paint it over with different names.

Here’s just a few of the other names I believe Home Jobs Now is linked to:

That’s at least 5 I can remember, but it’s very possible that there’s way more out there. Most of these sites I discover from work at home special report sites, so it’s quite easy to take the scams there and add the to my work at home scams list page.

Simply look at each site if you want proof and you’ll see very little differences. For example, look at an image of the review I did for Home Job Source. Notice the actual image of the word and then look back at the Home Jobs Now image.

I’ve already proven on more than on occasion these places are scams:

Back in November of last year, I reviewed a program called Home Job Placement (let’s call it Home Job Placement) which looked exactly the same as the Home Jobs Now. I went really far in exposing that scam and pretty much the same exact flow is happening with this program.

In other words what I ended up proving was that the program was based of another program that I had actually purchased. The whole review and discovery can be found above and if you need evidence that Home Jobs Now is a scam, just know that the same exact programs I linked that review to are also associated with this one.

So there was no point in re-doing the same work.

But if you want to read more proof as to why Home Jobs Now is really an illegitimate program and/or need more evidence, here you go…

It’s funny I chose to compare it to this program because as it turns out:

It appears that the official Home Job Placement website (one of the duplicates above) no longer exists and any and all links that once went to it are now pointing to Home Jobs Now.

Oh what a coincidence! A scam moved over to another scam!And I say it’s funny because I already knew what was happening but even further research just proves it even more. Here’s an example:

We have a “fake” review site here that promotes HJP. You find a lot of these when you start to search for these programs, but what would once lead to the official HJP page is now leading into Home Jobs Now. Is that deceptive? Yes I think so.

Now let’s talk about the other deceptions with Home Jobs Now:

While a lot of the things I pointed to can already be considered deceptive and expose the program from the inside, I want to look at the official Home Jobs Now page (what you see before you get into the program) and help people identify where the deceptions are because I get a lot of people giving me feedback on these programs and one of the many things they have problems with are they feel misled.

I can’t blame them since if you read the official page of the program we’re talking about now, you may get a lot of false impressions. For example:

If I were looking at this, didn’t know the truth about these programs, I would assume just by what’s said here that:

So just on this page right here, there’s a bunch of deceptive things they put up and every single thing I though in my experience is just NOT true.

I have never believed based on what I found inside these programs that suggests you can make money quickly or immediately. And the number of spots left is also a lie. They always give you a default number (9 in my case) of spots left. It’s fake.

And that’s just on the main page. Once you enter the information they ask for, it’s onto the next page where there’s even more deception taking place:

0 out of 10 stars. I have seen what’s inside this program and I was not happy. And because whoever’s behind these program/s whether it be one or more people, keep making up new names for them, it doesn’t help in making them seem anymore legitimate.

There is just so much falseness to these programs which I’ve been discovering for several years now and while they are getting lazy (or maybe I’m just getting better at finding them) at hiding some very important facts that end up undoing them, there’s always a new crowd of people (even old) that keep finding these sites and buying their programs.

And good luck finding any authentic comments from people who say they like those scam programs. I haven’t found them and I get a fair amount of people who criticize my reviews and often give me general rebuttals on how they succeeded with a program, even though I never take those seriously because they never prove it, but what I’m trying to say is that with these programs, so far, it’s been a unanimous dissatisfaction from people who have tried them and left comments on my site about them. 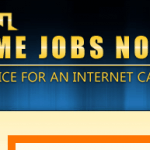 This program does not provide what I consider legitimate options for home jobs. See how I work from home for myself full time here.

11 thoughts on “Home Jobs Now Review. A Very Deceptive Scam in my Opinion”