There are many types of online scams today and the one I want to warn you about today is from people who pretend to be associated with Google to try and get you to buy their programs. This is known as the Google listing scam. 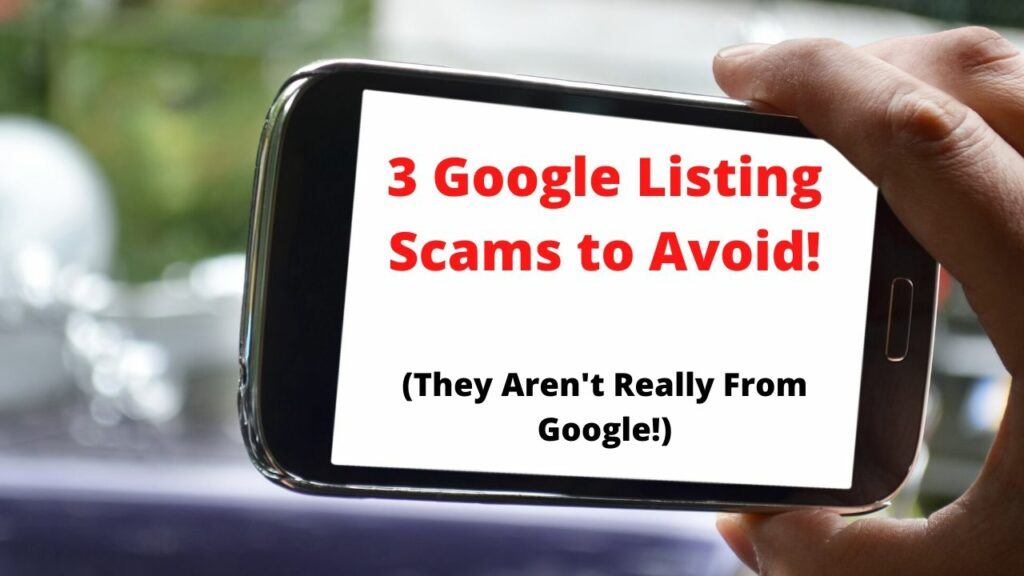 What is a Google listing scam?

It is a type of scam where companies will call or email you and say they are associated with Google. They’ll then try to pitch you an offer to get a website up on Google for a certain price and lie to you in saying that it will make you money. This is done one of two ways:

What happens to people who fall for this scam:

Well they lose a lot of money and depending on how deep into the scam you go depends on how much you lose.

The victims of this scam assume the company calling or emailing them is from Google, and therefore trust them. In the process, the fake company gives people worthless websites, takes their money and in some cases, keeps coming back to upsell the victim to buy more expensive things like online coaching to make money online and those can impact your wallet in the $1,000’s.

Make no mistake, a company that calls you up, says they are from Google and then tries to sell you something has no association with them. It is a lie to get you to drop your guard and buy their program.

The 3 most common types of Google listing scams you’ll run into:

My story with the Google listing scam:

I know a lot about these scams unfortunately because nearly every single day, I get a phone call or email from various area codes and fake emails that I already know are going to tell me one of the 3 things I just warned you about. I am getting these calls because many of the programs and services I test that deal with making money online probably sell my information to spammers and different companies.

I’m used to it so the worst that will happen is I’ll get an inconvenient call once a day, but to those who are looking for legitimate ways to make money online, they can get caught for $1,000’s only because they hear the name Google and think it’s automatically legitimate.

Sadly these companies and the shady people running them already know that which is why they use the name. There is little consequence if they ever get caught and it’s very hard to pin point exactly who the scammer is.

These companies run through various countries, cloaked phone numbers and basically operate in none transparent ways.

If you get caught in a Google listing scam, how do you get your money back?

You can get your money back from and online scam by following these guidelines, but in short:

If you call up your credit card company or bank, and explain the situation, usually a dispute for the charge or citing an unauthorized charge is how you can do it.

Sadly most people don’t understand that they can do these things and end up making the mistake of calling the police or filing complains with the actual scam company. Neither of these methods usually end well because of how under the radar these scam companies operate, so your best is to directly contact the card/bank which you purchased the scam with.

I have to make this clear: Google has no associated with these scams.

They will never call or solicit you for money. Remember this so if you ever have anyone contact you saying they are from this organization and asking for money, they are lying to you, hang up on them.

You can also record the name of the company and let me know about it on my report online scams page where I’ll add it to the list if it really is a scam.

The only time you will ever pay Google is if you are creating ads through their Google Ads network and paying for clicks. This is a legitimate network they run, but is completely different than the 3 types of scams you’ll read about.

Understand each type of Google listing scam, the sales pitch and knowing better:

I know I explained the crux of the Google listing scam, but there are also a lot of work at home scam programs which don’t even use Google’s name that operate in the same way.

I just want to help you understand the clues to look for in online scams in general so if one of these companies contacts you and you see the signs, you’ll know to avoid it.

1) The calls where you’re told your site isn’t on Google and they’ll help you do it.

These ones really annoy me. The people behind these calls have no dignity whatsoever and scrap the phone book for anyone who will believe this garbage and unfortunately many people who browse the internet do not know anything about listings.

They think having a website appear means having to do something specific or pay for it. This is FALSE. Want to see an example? I reviewed a company called JLF Web Design which tried to do this sort of thing to me.

In order to make a profitable website, there are more requirements than just showing up on Google and being that I know this very well and do it, I understand the process: 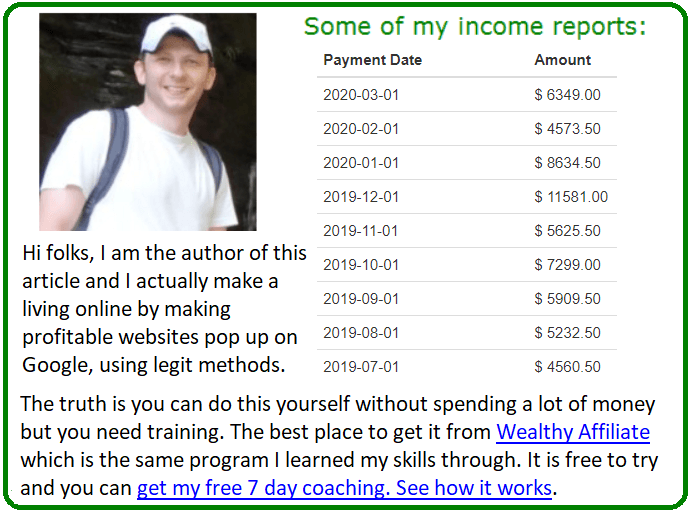 The target of this sales pitch is people who already have a website but have no clue how to profit with it. In reality, to get a lot of visitors from Google requires that your page rank on the first page of the search results and that takes time, patience and understand of something called SEO.

Companies who are involved in scamming people through this method exploit people’s lack of education in SEO and say they’ll “do things” to help your website rank on page 1 of Google. In the process they just charge you for things that never actually do that.

He was paying the scam company $600 a month and they were telling him he’d rank his website on the first page of Google. In the process, he never got that type of result or any visitors to his site.

After he joined Wealthy Affiliate, I told him to:

A) Cancel on his own accord with the company that was charging him $600 a month (that saved him that much every month).

B) To start building a brand new website with Wealthy Affiliate and doing it the RIGHT way. He is VERY happy right now with the knowledge he is getting, the website he’s building and the community he’s in.

3) The ones where a “business specialist” will coach you.

You’ll likely get a call for this one and it’s the last of the 3 types of scams you need to watch out for because this is the one where you can lose the most.

This is another automated call you’ll get and if you continue, then you’ll speak to a real person claiming to be a coach, but they aren’t. The person you’ll speak to will will say they are from Google (not true) and they’ll charge you $1,000’s for online coaching in making money online.

I’ve spoken to these scammers knowing well who they were just so I verbally get them to admit they are full of it. I tried asking lot of questions and they got so tired of talking to me, that I just got hung up on.

If you wish to get real coaching to make money online, you will rarely find such things where it’s possible, but I have a few options if I earned your trust by this point:

1) Get real online coaching from Wealthy Affiliate where I’ll help you. You can try that for 7 days.

2) You can get real coaching from someone I trust 100% in this business. The name of the program is called Affiliate Coach.

Fraudulent companies exist wherever people are trying to make money. They’ll do anything to make you pay them, including pretending to be from Google. Now that you understand what these scams look like and how to spot them, I hope you’ll be able to avoid them.

As for learning the process of making money online, I’ve also provided what works for me in this business and if you have questions, let me know!

5 thoughts on “3 Types of Google Listing Scams You Need to Avoid!”