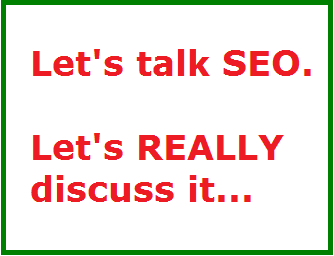 I noticed that as of late, I haven’t been covering SEO enough and I’ll explain what it really means.

Lately many of my articles have been covering website and marketing terminology vs the usual product reviews I do.

And surprisingly, despite all of the things I’ve covered so far, SEO has not been one of them and it actually is the most important. Does that mean I’ve omitted information on it thus far? No, actually I’ve had many snippets on my site explaining it, but I’ve never really had 1 article devoted to it, until now.

Let’s really get a deep understanding of this term because I don’t see enough people or “gurus” teach it the right way. I consider my understanding to be the right one because I’ve had over a decade to understand it as well as plenty of websites to test this on.

For the first several years I began online business, even though I knew what SEO meant, I only understood it’s abbreviation, but not the big picture and the big picture is really the key to succeeding with it. But let’s break down each word/letter:

People search online right? Where do they search most things on? Right here:

The engine, but in this case, the S and E are together to make search engine. Most searches online take place on search engines. Google is the king of them all.

The search engine seeks to optimize the results it gives to the people who search it. The optimization part is providing people with the site/s or videos that BEST apply to the search query people type.

Why is it that most people who search online do it on Google? Because that’s the place that delivers the best results, or as we call it, the most relevant results.

Compare it to Yahoo, Bing, YouTube, Facebook and any other large network, why is it that Google still gets more browsers even though it’s technically way less fancy looking? That’s because people know that it will deliver to them what they want to find.

So as a search engine, Google optimizes it’s results to do this and if they’re still number 1, they are doing it right.

Understand that SE and especially the O is constantly going on:

Whatever order of websites you’ll get when you do a search will likely not be the same when you search for it again a day later. And many times, a lot of websites will shift in positioning and/or disappear completely from the results.

Well that’s because Google always optimizes which websites will appear for which searches based on many different variables. Do note that despite these constant changes, there are ways to maintain stable rankings on Google if you just do what they like.

What is your job when it comes to doing SEO?

Simple: Do what Google likes. And what does it like?

To appease it’s browsers as we already learned. The public is what makes Google constantly evolve and optimize itself because if they wouldn’t be there, Google would have no reason to constantly provide the services it does.

Remember that one key? Well here it is:

Relevancy is a very intermixed topic.

For example, it can be applied to things like conversions, ads, website layouts and more, but in SEO, you are making your website such that when people type in a keyword phrase, if your website is the best answer or information for that keyword, then it’ll be the one to pop up on higher.

If I have a website that features a lot of long and detailed articles (we’re talking thousands of words) on how to deal with termites, Google would see my website as being the better one to rank higher vs say a website which only seeks to sell termite services and products (say a few hundred words).

Information and delivering as much of that as possible on your website is what adds to the relevancy and quality of your website and it is something that Google really takes seriously when considering whether or not your site is good enough to be ranked high.

Also when you target long tailed keywords that usually don’t have too many other sites also trying to rank for it is another good way to get higher positioning.

7 things that determine whether or not you’ll be successful with SEO:

As a new site starts, it has no real reputation with Google so it will always take time before any website can turn into one that Google will trust quickly. The older your site gets, the better, but it’s not a big deal (Why this is.). It also needs to have a strong…

Forbes of course and it is the reason why is if your website and Forbes compete for the same keyword, Forbes will get the higher position almost every time. Your website is probably never going to reach a Forbes level of content base, but most websites you’re going to be competing against aren’t as big as it, so you can beat them by having more content be posted to your site.

You may not beat one or even many websites for higher positions, but there is a lot of space out there to chase keywords and occupy enough high positions and get a lot of traffic.

When people share your website and it’s articles, it shows Google that they like it. And remember, since Google is trying to appease people who search on it, the fact that they share your site shows them that they are indeed liking your page.

People who take the time to leave a comment on your site also shows Google that the site is important. Not everyone who leaves comments likes your site (maybe it’s a topic that angers them or they are just confused) but a comments are an important piece of a blog and SEO. They also count as content.

You can have a million articles on your website, but if they aren’t up to a standard that people are going to like, leave comments on, read all the way through, or share with other people, it’s not a high quality site and Google will notice it. Even though it’s the last thing, I look at this point as being the seed which makes your website highly successful with SEO.

I hope my explanation of SEO wasn’t far too in-depth, but the more I’ve understood about it, the easier it’s been to create websites that have seen success and so I’ve really wanted to share that. Look at it in the same or a similar way and it’ll help direct your personal website or blog to a point where it can successful.

Secure sites will get extra points for SEO, meaning your page has to have what is known as a “padlock” which indicates that security. It is known as SSL.

More than 50% of searches appear for phones and tablets, aka mobile devices. If you do all the right things for SEO improvement, but don’t have a mobile friendly site, it will impact it’s rankings for mobile users. You don’t want that, so make sure it’s mobile friendly, because it is a Google ranking factor too.

5 thoughts on “What Does SEO Really Mean? The One Key to Making it Work”