I had absolutely no clue about how Enviralizer worked, so I bought a membership into it to find out. This review will explain what I learned.

Price: $25 (no up-sells but optional offers do exist).

This program has lots of good information, but some money generating strategies are limited to one area and some methods are overly promotional (which means they have less chances of working).

Reviewing internet marketing products often involves buying them and with Enviralizer, that’s exactly what I had to do and while I was worried that it was a scam, the truth is that it isn’t, although there some things I question about the program, so let’s get into all the details.

This is a program which for $25 offers you a number of resources that mainly involve promoting the program itself through Facebook. There is a lot of content on doing this. You are also given affiliate links, banners and pre-made pages as well as emails to collect potential leads.

It is true that the same strategies taught in Enviralizer may be used to promote other offers, but I believe most people will try to promote this instead of something else.

There is one important question I pose and that is if Enviralizer is an MLM.

The main members area says there’s a downline, but I couldn’t find a compensation plan so I really can’t tell how this works. I do know you can promote this program. The only piece of information about a comp plan was that you get paid after your first sale is made with the 1st sale going to your up-line. 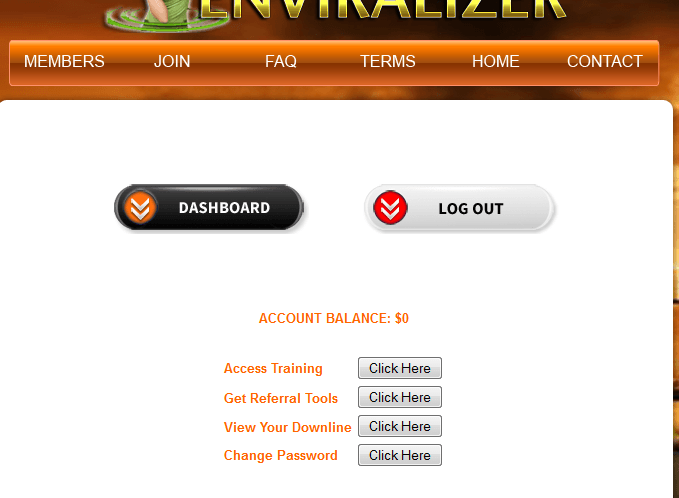 There’s 4 sections that you get access to. Let me get the basics out of the way first:

Get referral tools: Gives you access to your affiliate links to promote Enviralizer.

There is also a capture page (known as a squeeze page where you collect emails) you get for which you have to sign up first.

I don’t know if you’ll have to pay extra for this but there is a promotion for Aweber which is a tool that sends out emails to people who will sign up on your capture page.

You do get to download a folder with 5 follow-up emails as well which you will paste into Aweber (if you use it) so when people go to your capture page and don’t sign up right away with Enviralizer, they’ll instead sign up to your email list and then the emails you’re provided will be sent out to persuade them to buy.

View your downline: This page is empty unless you start getting referrals. And the other option to change password is self explanatory.

Now the most important piece of making money with Enviralizer is promoting it and/or using it’s strategies to promote something else and this is where we get into the main training area:

There are 3 parts to this place. The first is the Enviralizer Facebook marketing guide which composed of several pieces:

1. A basic explanation on how to market Enviralizer on Facebook such as joining groups and sharing your affiliate links there, messages and even pre-made pages (which you’re given by Enviralizer). You’re actually provided a list of 100’s of groups to join to share your links with.

2. There is also a 72 page eBook that goes much deeper into this training. Within the eBook, there is a promotion for another product to help you market it better. I didn’t buy it and from what I understand it is optional.

3. A video training course: A 52 page eBook talking about marketing on YouTube. The information is pretty decent and there is another product being promoted there which I also didn’t buy.

4. There is also a WordPress website video guide where you’re shown how to set up your own site. There is also a promotion here for some sort of free site and hosting program offered for a fairly cheap price, but I personally wouldn’t bother with it since there are much more cost effective ways to build your own website.

Hold on a second, is Enviralizer a pyramid scheme?

This question also came up when I first looked into Enviralizer. So is it? No. And that’s because the value of information you get for $25 satisfies that what this program gives you is a fair trade for your price. If the cost of this training was in the $100’s or $1,000’s, I would have definitely thought different.

What are the odds of success with this program?

Since most of the training focuses on Facebook marketing and making videos, I’d say the odds of making a huge bundle aren’t that high in my opinion.

Making a little though? I’d say it’s possible. After all, the very first guide gives you a list of 500 different groups you can join and advertise Enviralizer to so with probability in the mix, I’m sure you can make some money.

However, I feel that the amount of time you’ll spend joining FB groups and promoting your link may not necessarily result in a lot of money being made and the 2 biggest reasons for this opinion is that:

Now the Enviralizer training does talk about giving people good information and not spamming, but I don’t see how this is possible. Some of the pages I saw looked a bit questionable to me personally and if someone showed me this and asked me to join the program, I would probably say no.

3 out of 10 stars. Decent info and odds of making money, but I don’t believe it’ll be a lot, at least not for inexperienced user. This option (Wealthy Affiliate) is a lot better.

Even though there were no actual up-sells after buying into the program, there were other offers which while being optional still made me think it was a good way to promote extra things so indirectly it felt like an up-sell. But I won’t hold Enviralizer against this.

The other thing I wonder about when I review programs like this is what do they really offer people? And my conclusion based on what I saw is that you’re going to promote the same program to others. This is why that pyramid scheme question arose in the first place.

I personally don’t like businesses who function like this and prefer to promote something that truly gives people something they can build and not another way to promote opportunities to others so they can end up doing the same (round and round we go).