It’s been a VERY long time since I wrote anything on MLM businesses but today I though I’d return back to the subject and discuss how to actually succeed in it.

Yes I know, the title indicated that you shouldn’t be involved in it and I will explain why, BUT for the people who in spite of my coming arguments will still stay vigilant and try it anyway, at least you’ll now have a formula to work with.

Let’s all establish what an MLM is before I show you how to succeed with it:

I may have a different viewpoint/understanding of it than you may have, so let’s just make sure there are no confusions:

MLM (multi level marketing) is a form of business where the general principal to success is referring customers into a company and then having those customers refer their own customers into the same company.

This is called recruiting into a downline. This is also a different model than network marketing.

Within downlines, you can theoretically have an infinite amount of them. I can refer 2 people, those 2 can refer 2 more, each, and that will give me 2 downlines, with a total of 6 people under me:

Now the incentive for even doing all of this is clearly money. By referring the 2 people into the business, aka my first downline, they usually pay a fee to enter the business and part of that fee goes to me in the form of a commission.

Then in the second downline, the 4 people referred make the 2 people above them a commission, but there is a residual amount that still goes to me. That means in THEORY that if I keep referring more and more people into my first downline, and those people keep referring more people into the second downline and so on an so forth, that I can keep making money off EVERYONE. It’s basically a form of trickle UP economics, not down. 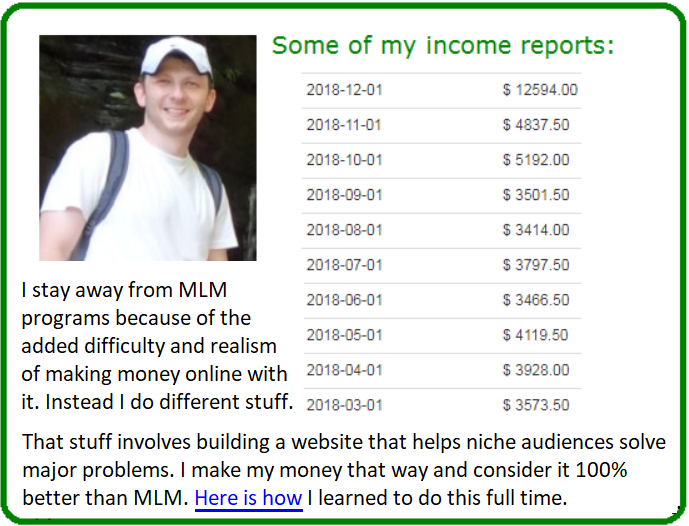 How to make the MLM formula a success (And why it’s so hard):

Well first off, the “unfortunate” reality is that this formula is almost like a dream because most people never make it past the first downline.

They refer maybe a few people into the system, but then the second downline is where things falter. But this scenario IS a possibility never the less so here’s how I approach it:

No matter what, this 3 step formula is universally applicable to ANY business.

In the case of MLM, here is how it works:

1) The niche audience must be one that is interested in MLM topics.

There’s a reason why this is important:

You just don’t approach just ANYONE you see and try to get them to join, that usually results in people not wanting to speak to you. This is why in most cases, people never succeed at this business and MAYBE if they are “lucky” can get a few friends and family members in, but that inevitably leads to ruined relationships…

But if you talk to people who are OPEN to the idea, then you have a better chance. Getting the right leads into the right, corresponding promotion is what increases the conversion rate and success of that business.

2) The next step is the creation of a funnel, aka website where this audience can come to.

The fact that at this point, our audience is defined makes it easier to sell the MLM program to them. I prefer websites over physical businesses because the costs are minuscule so if you fail, you lose little.

3) Explain the benefits of whatever program you’re pitching. Make it simple.

MLM programs have a very bad reputation of making their “compensation models” more difficult to read/understand than the tax code of say, the United States. And I always say, the more difficult it is to understand, the more you should stay away from it.

But if you can break it down to your potential referral in a way in which they will clearly understand the benefits and what is going to happen once they join including the potential money they can make, it’ll be a lot easier to sell the program.

4) Once the sale is made, the work doesn’t stop there.

In the case of this type business, your referrals success is paramount to yours because any other referrals they bring in (which is how they’ll make money) will keep them in the business and will keep making you money.

So you have to basically make sure they succeed and how can you do that? Well there’s 2 options:

A) You can personally coach them.

B) You can let the program itself coach them. Many programs these days offer training to do that, but I’ve got to be honest, it’s terrible training that makes college lectures sound like the 4th of July so if the training is NOT good, you better rely on the first option to make sure your referral makes it.

Then, if they do make it and refer others, it’s still going to be YOUR job to make sure your first referral trains THOSE referrals, because that will keep all the parties around.

In short, you will have to keep making sure EVERY referral who enters through your promotion and then gets others in, gets the best possible training to succeed. This is the ONLY way I personally know to make this formula work.

Through this formula, you will be bringing in referrals who have a higher likelihood of ambition and open minded to succeed. That will make them more coachable (considering you are a good coach). And also, for what I consider to be better than MLM, I offer my own online business coaching.

However, even in the best case scenario like this, everything crumbles eventually.

And these 5 reasons ultimately point to why I never advise people get involved with any MLM program:

1) That best case scenario, not everyone will be making money.

Once they realize that, they will leave the program and that will cause a chain reaction of the above referrers to leave to (since their referrals leaving means they lose money). Eventually this trickles up to you.

This is one of the reasons why a LARGE majority of people fail with MLM programs. Yes people constantly make the argument that an business has large amounts of failures, but the reasons for those failing is different.

The formula I provided actually benefits the most amount of people, but in practice, it acts out quite differently as the most successful people involved in an MLM are people at the top who either start the program and/or are the first people in it who have access to the largest customer base (before the potential amount of referrals runs out).

These people can basically monopolize on the market early on and “steal” the profits. This most commonly plays out with serial MLM promoters who have large lists of prospects they promote one MLM after another to and once they join, that serial promoter gets a HUGE amount of money, but once the program inevitably crumbles, they move onto the next and send their leads their again and the leads in many cases adore the promoter as being this rich success story they want to copy, so they will keep following them into any new MLM program they recommend, not realizing they are being taken into a system that’s going to probably take more and more money away from them and pay that same person they adore so much…

3) If your MLM doesn’t have a physical product or anything of value, it’s a pyramid scheme.

All money making potential aside for a moment, if the program you’re involved with doesn’t really offer anything aside from a referral program, it is a downright pyramid scheme and if nothing else, that is absolutely illegal to run. Here is how to spot is an MLM is a pyramid scheme.

This is one of the reasons why many MLMs have taken to creating high priced products that few people buy (for the prices) in order to justify including a referral program alongside it (because that’s where the money can be made) and it is the reason why there’s still few active programs like it today which have been around for decades.

But it’s very common to see both the term MLM and pyramid scheme be synonymous.

4) The incentive is sleazy money making tactics, not offering value.

If I tell someone they can make money easily, then get them and they try to relay the same message to their referrals, there’s nothing being offered but a lottery type of mindset.

And believe me, no matter how many people (and there are many) who stick up for MLMs try to say otherwise, in the end, they don’t care about what’s being offered, they care about the money they are going to make. Unless the person sells the real products in the program and for a fair price, it’s going to end up being a pyramid scheme.

I’ve often said no to promotions which offered a good potential compensation model/affiliate program because they were just offering an unfair value to my potential customer/s. It’s not worth it.

5) There’s too many holes in the MLM system.

Leaving the pyramid scheme argument aside, it is a near impossible scenario to have high quality, ambitious referrals keep bringing in the same types of people. There WILL be lazy people coming in. There will be unambitious people coming in and believe me, their lack of progress WILL affect the upline, which will either be YOUR referrals and/or you, if not right away, then eventually.

You can’t just babysit every single referral in your downline to succeed.

You can do your best to offer the best coaching and your referrals to coach their downline well, but even if this impossible scenario comes to pass, just read my first argument again on there eventually being NO space to get in new referrals and again, it will all crumble.

Alright Vitaliy, I see your point, but what do you offer instead?

I’m proposing NOT being involved with this business model at ALL. There are plenty of legitimate/alternate opportunities to make a business out there than having to refer someone into what is probably going to end up being a pyramid scheme.

I prefer using the 3 step business model I mentioned above, but instead of pitching an multi level marketing program at the end of it, pitching a service or product that actually HELPS people.

To make this short, there are billions of people in the world with serious problems who need help fixing them. Through affiliate marketing, I can make a lot of money helping those people out. Doing that via MLM however is going to lead into the opposite route, which is why I prefer the former.

And to conclude, there is one program you should check out if you wish to learn about this whole affiliate marketing thing and it is called Wealthy Affiliate.

Now with all this being said, I’d love to hear what you think of my positions on the whole MLM business model and if my scenario in succeeding with it is something agree or disagree with (respectfully please!), especially on the point on how it is inevitably going to break down.

4 thoughts on “How to Succeed at MLM. Don’t do it. Here’s a Better Option.”