Good grief, it happened again. I join a program (The Online Profit System) for $49, get promised a whole bunch of stuff and in return get a little bit unless I spoke to a coach (which itself is a clue that there’s more to pay).

That pretty much sums up the review of what happened to me when I got involved with The Online Profit System folks, but I want to go into more detail as to what happened, this trend of low quality stuff I see across MANY different make money programs like this and how they operate to get you to do/pay more.

This is unacceptable and I will NOT be recommending The Online Profit System to you (don’t worry, I’ve got something good for you instead of this and you’ll find out what it is in a moment). But first:

The quick review of The Online Profit System:

Name: The Online Profit System. And by the way, once you get inside, it’s called “My eCom Education”, aka “MEE”. 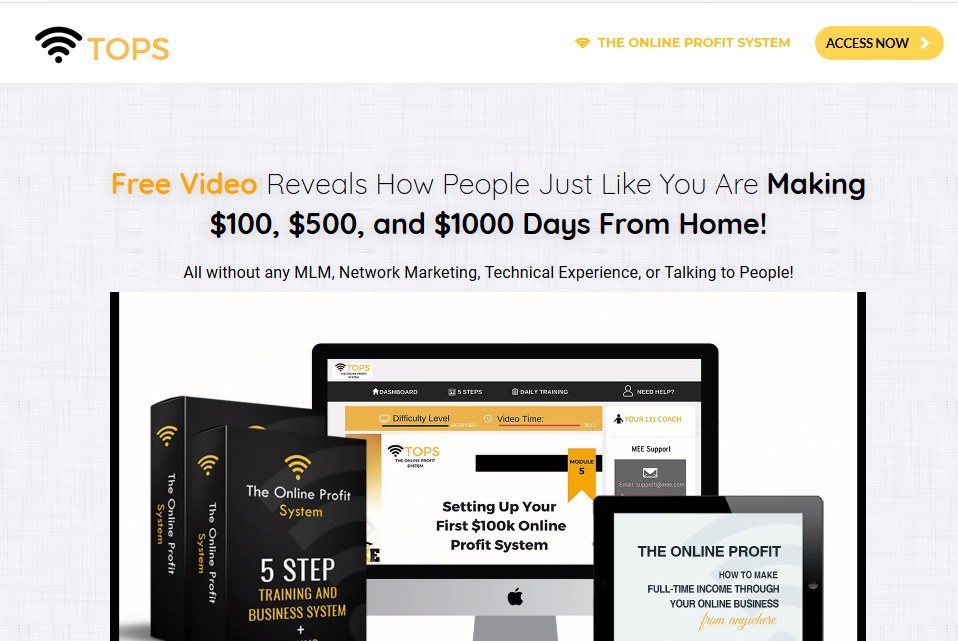 What is taught inside this program? You basically get a preview of the possibility of making money through an eCommerce store made with a program called Shopify (it’s a popular thing these days…) but you don’t really get any training unless you speak to a coach to “unlock” the extra training.

So basically…no real training, just a preview, then a pitch to contact your coach, that’s what I saw.

I literally went through a program just yesterday that did the exact same thing this program is doing.

They also hyped me up about setting up an eCommerce store, had me contact a coach and that didn’t lead me anywhere because I suspected the coach was attempting to sell me more stuff and he wouldn’t let me move forward in the training unless I talked to him.

Folks, this is keyword for: We’re going to sell you extra stuff and you need to buy it if you want to move forward. That’s my opinion, but I’m telling you, 99% of the time I’ve seen this type of stuff, that has been the case.

It’s a common scheme going around these days and you need to be careful. There’s too many clues I saw that make this opinion a very possible scenario.

Do I recommend this program? NO. Refund in progress. 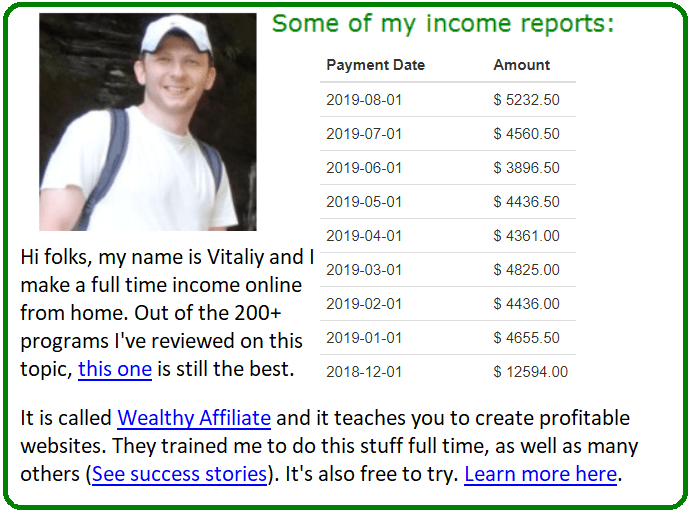 What is this scheme I keep talking about? Oh grab a coffee because…

You’re going to love this…

I’ve been investigating make money online programs for a very long time. While there are some good ones, you’re more likely to encounter a lot more of the scam kinds since there are unfortunately way more of those.

But every so often, there’s “trends” where the scam programs out there follow a certain method of operations.

Here are the trends…

1) Many years ago, online MLM programs were the hottest thing and you saw promotions for those just about anywhere. Unfortunately most of those turned out to be pyramid schemes (illegal stuff).

2) Then the trend moved to high ticket programs where there was a series of steps within a program and for each ascending step, you’d need to pay more and more money (lots more).

And this segways into The Online Profit System:

Now what I am seeing lately is the “online coaching” trend, where programs get you into their scheme for a little bit of money, marinate your thoughts and imagination with success stories of how people are making money online (see real success stories from my top recommended program, Wealthy Affiliate here), give you a little bit of bait, then ask you to talk to coaches.

The coaches then, let you in on the catch and that is…

If you want to get their coaching or proceed further, that you need to pay more.

It’s kind of like the high ticket ladder I just mentioned above, but the coaching is included. And like I always say, if you want REAL coaching, without this scheme element in play, you can get mine for free (for 7 days). Here is info on my legit coaching.

The latter scheme is what I truly believe (and again it’s my opinion) is going on with The Online Profit System. There’s just too many clues like I said before. And I want to let you know all of them:

Here are the 5 clues to back up my opinion on The Online Profit System:

Each clue (or red flag) is major and since this program has all 5, that’s a major problem…

1) My own experiences in this whole field.

You can read about it here and we’re talking 14-15 years. I wouldn’t talk about all these trends if I didn’t have intimate knowledge of them. But that is honestly not enough, there should be more evidence…

While on the checkout page of The Online Profit System, I was told I’d get coaching, I wasn’t told anything about the “limits” of what I could access once I purchased the membership. 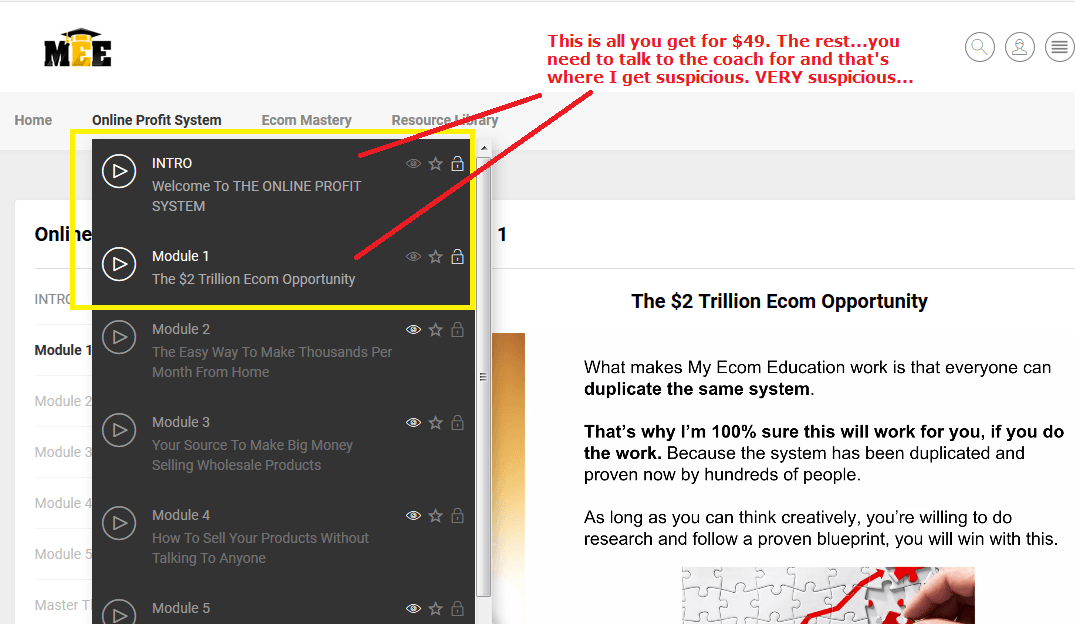 All while being promised a whole lot more on the sales page earlier and that’s really part of the deceptive thing I talked about.

If nothing else, I saw all the other lessons, but I couldn’t get access to them unless the coach I was assigned “allowed me” to do it. All you get is just a few lessons, and they aren’t training lessons, just bait to go further.

I call that deception. And frankly, if this is what they’re doing to me THIS early in the program, who knows what’s going to follow? The trend already doesn’t seem good…

I already mentioned I had the exact same experience when I reviewed a similar program like this yesterday, called My eCom Club. I’m telling you guys, word for word, it’s the same stuff and I assume, the same scheme.

Oh and let’s not forget, at the very beginning of this review, I said that The Online Profit System is also known as My eCom Education. Is that a coincidence? Is there a link between the 2 programs? Perhaps…

4) The program doesn’t go through all this trouble, unless there is a catch. 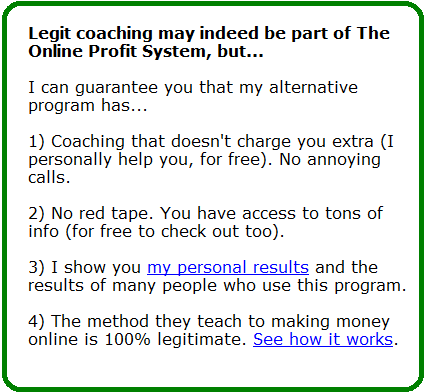 Why does a program have you go through a coach in order to let you access more lessons? I’ll tell you why…

The most obvious (and once again, my opinionated) answer is that they are prepping you up for coaching up-sells.

Very few programs or actual coaches will give you cheap or included in your membership training, unless you pay more. And usually the coaching is just a prelude to filtering out who is ready to pay more.

Add to this the fact that I felt deceived in being promised so much, then given a measly amount of videos as “training”, and I suspect there’s more deception on the way if I go ahead and move forward.

Allow me to spill the beans on that.

Usually these types of commission promises tell me that there is high ticket up-sells in a program. Meaning if you buy them, they’ll tell you that you can make back those high commissions they promised. That’s just how high ticket programs love to sell you stuff.

Now while I did say above the “training” in this program is centered around Shopify, and you will be given training on eCommerce website building, the truth is that in many cases, the products you sell may not give you the same high commissions as the sales you’d make selling the whole training program to people, but remember, they will want you to buy that first.

0 out of 10 stars. While there is NO 100% proof that there are high ticket up-sells being schemed to you through the coaching, this program is operating in the same manner as many others I’ve reviewed that DID indeed do this sort of stuff, and based on all of that, I am also assuming the same thing is going to happen here and that’s just a sad, unnecessary thing to throw at people.

Because I’ve seen better programs that don’t do the sort of things this one is doing, I can tell you that you DON’T need to pay this much or go through this type of funnel to get results in making money.

You already know what my opinion is of The Online Profit System, now the other logical thing to seek is, what would be the opposite of that program, that you can trust, that doesn’t do those things I eluded to earlier?

Well here is your answer:

To finalize, I’d love to hear from the creator/s of The Online Profit System. Specifically, I want to know if this program, through it’s required coaching step, is going to pitch that people need to buy up-sells and coaching packages to move forward.

Please prove me wrong (I’m being sincere here), I hate giving programs bad reviews but everything I’ve seen in the program mixed with past experiences just points to what I already said…

If I’m wrong, I’d love to update this review and give this program another look. If not, I’m sadly going to have to assume I was right about what I originally believed regarding it.

Quick update on that refund I’m trying to get from The Online Profit System:

Just wanted to let everyone know I submitted a support ticket with The Online Profit System to get a refund, which they did honor.

Additionally, I was told by the support staff who responded to me that there are 5 lessons offered to you, but they are made available each day you are a member. But since there are more than 5 lessons to this program, I still assume they’ll make you talk to the coach to get access there.

But either way, for the sake of fairness, I wanted to give you guys an update. Either way, my best recommendation (the other program, Wealthy Affiliate) is still recommended instead. 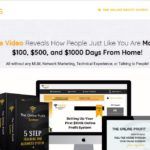 See which program I have rated higher than any other to make money online with.
Click here to test drive Wealthy Affiliate risk free and get your bonuses (no CC required)