Today I purchased a membership into a program called My eCom Club and in this review, want to say why I regret it (I scheduled a refund process). Did I get scammed?

Not quite (maybe I didn’t get to that point), but I want to detail my experiences from this program so you know what to expect too…

First, there’s 5 shady things that happened with My eCom Club:

These 5 shady things are in order from the moment I saw the sales page of My eCom Club to the point when I was inside the program:

1) Kids are making money with this type of program?! 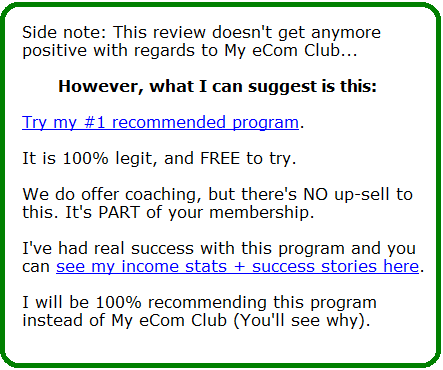 Before I even entered the program, I saw their sales video pitching it and it was saying how an 8 year old girl was making nearly $500k doing what this program was going to teach me to do.

Right there, I should have stopped, because this is just a ridiculous thing to say and although at the bottom of the video, they did say this was just an example and not real, still, to use a little girl as you example is just shady…

2) Next, I purchased the program and it had me “sign” an agreement (not good):

The problem is this agreement said I would talk to a coach if I had issues. I couldn’t proceed to the actual training of My eCom Club until I did this and I hated that to be honest and I’ll explain why in point #4.

3) After I signed this agreement, I got access to the training area, but it was very limited.

I went through 2 steps (out of 22), before I could not proceed further. In order to proceed to step 3 and on, I would need to contact a coach I was assigned. This is why I say I got very little out of the program.

4) I have on numerous occasions warned against talking to online “coaches”. Here is why.

It’s because most of the time, these aren’t coaches, they are simply selling you further up their upsells, meaning to go further, you need to pay more. If you want true, legitimate coaching, I offer that type of coaching here.

5) I decided to for the sake of the review being better to actually contact the coach I was assigned.

He didn’t sell me anything, but he did tell me I needed to schedule a call with him to move forward. I told him I wasn’t interested and that I just wanted to see the training I paid for.

He said I could not do that unless I talked to him (that’s suspicious to say the least). I’ll paste the conversation we had for proof below.

And in short, it ended with him saying unless I did the coaching call, I should just get a refund.

And that basically ends my experience with My eCom Club. However, there is more I need to tell you and that’s what the remainder of this review will go over…

But before I get to those details, let me explain something: 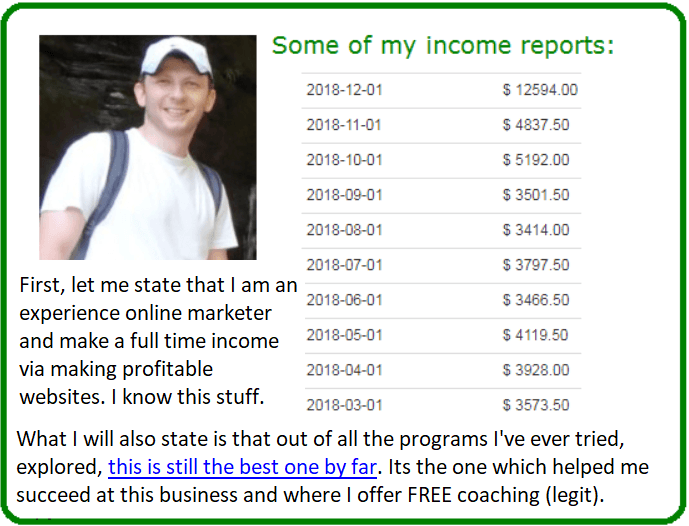 What exactly does My eCom Club teach?

So once you pay for the membership, go over the welcome area, and start the training, it’s basically just talking about creating your own online store (Shopify) and selling products there through drop shipping. If you don’t know what this is, here’s the quick notes:

You create a website, set up an eCommerce Shopify store on it (it’s a monthly cost), then choose specific products to sell to niche audiences on social networks. Once a purchase is made of your store, you don’t actually buy it for yourself, you order it for a lower price to the buyer, and keep the profit, that’s basically what drop shipping is.

The person who runs the training is called “Teo Vee” and he uses that formula I just told you about to a very successful degree. He basically showcases his success with this formula by displaying his sales figures which are in the $100k+ range.

Now let me say that that formula of niche audiences and selling niche products is legit, and I make my money that way too, but I do affiliate marketing with that formula, not drop shipping and I find that to be a better way to do it. What also matters is which program teaches you that formula for the best price and benefits, and here is what I recommend.

Is that a scam?

Well I don’t believe so, I actually think Teo is being honest about what can be done in drop shipping and I’ve personally seen these results from others, so I don’t doubt him there, it’s just the constricting structure of My eCom Club that I don’t trust that turned me away from it.

After I completed 2 steps of training within My eCom Club, as I said above, I couldn’t move further because I was being forced to talk to a coach.

Struggle as I did, I could not bypass this annoying rule, and so I did get in touch with the coach. As I promised, I will share that conversation we had with you: 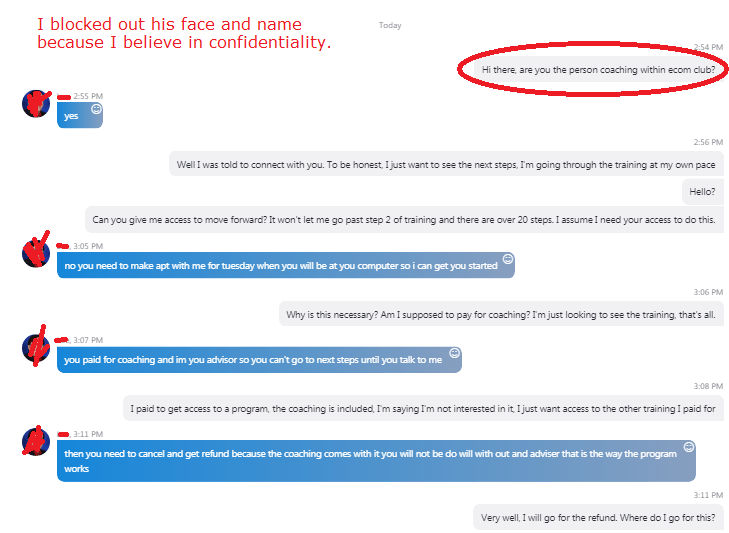 Although you can’t really gauge someone’s interest or enthusiasm level based off text messages, I didn’t exactly feel like this guy was interested in talking to me.

And he didn’t respond to my last question by the way, perhaps he saw that I was a “cold sell” and decided not to bother with me anymore. Or maybe he was just busy, who knows, but that’s not what’s important…

Update: He did respond to me eventually, and even closed down my account for me since I requested the refund. I am happy with this as being able to get refunds easily is a GOOD sign.

What is important is the fact that I tried to go past the coaching element of this program (because I don’t trust them as I feel there’s going to sell me extra stuff), but I couldn’t. That basically added to my suspicion that I would get sales offers later, even though he didn’t exactly admit to it.

Unfortunately in many companies I review, this is exactly what “coaching” promises turn into and I’d like to say that I offer real coaching help here on making money online (through affiliate marketing, not eCommerce).

As I already explained, there’s 2 levels of training, which consists of 22 steps altogether within My eCom Club.

For the $97 I paid, I get “coaching” and access to only 2 steps of training, before it gets cut off and I get funneled to speak to the coach. Those 2 steps of training I had didn’t really teach me much, just hype about the potential of doing drop shipping.

I believe (in my best case scenario), that the coach is going to help me move forward for a few steps, then when I hit a certain point (level 2), that’s when they’ll hit me with an up-sell. I hope that’s not the case, but if it is, then this program is going to be a scam.

Here are the levels of training within My eCom Club (notice how limited it is for me): 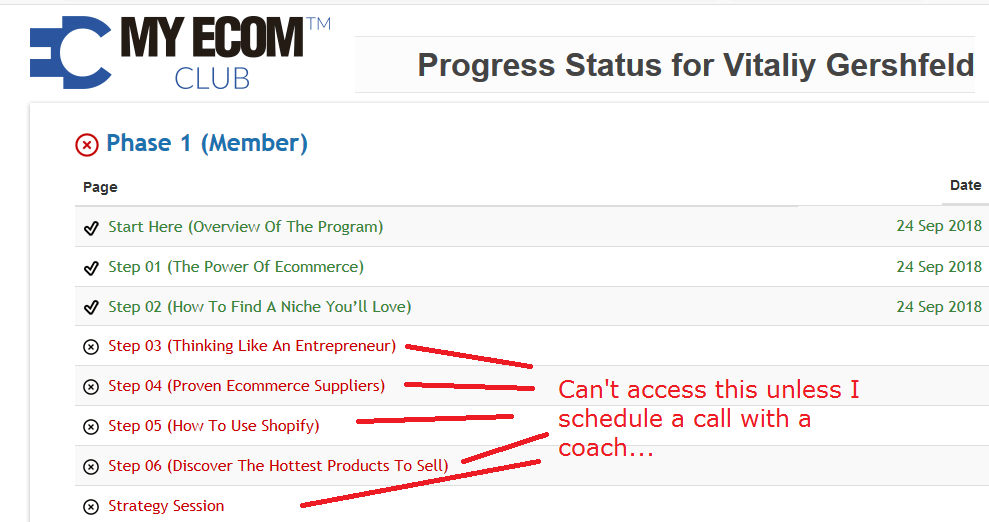 Now should I talk to the coach, like I said, I believe his/her help will only get me to the end of this (Phase 1) training. Then when I hit Phase 2, known as the “Advanced Member”, that’s when I could POTENTIALLY be hit with an up-sell:

To be honest, based on seeing what Phase 2 gives, it looks like there’s a lot of legitimate value in that training, but will I have to pay to get access to that? It just seems more and more possible the longer I get involved with this program and I am very worried about that, because it could mean spending a lot of extra money that I don’t want to spend, considering I though I’d get it all for $97…

I have to say again that I am not 100% sure on this, but with all the constraints this program already has in that it gives me a little bit and won’t let me move forward without the supervision of a coach, is extremely suspect…

1) The hyped sales page with the little girl and them telling me she makes money, whilst saying this isn’t real is

I just paid you good money, give me access and stop trying to helicopter over me every step of the way…

3) I don’t like that I only got 2 steps of hype about drop shipping and having Shopify stores before being restricted to go further (call the coach or you can’t move forward).

4) I don’t like the fact the coach wasn’t exactly polite with me, nor was he allowing me to go further.

I literally told him I just want to get the other training. It felt like he being evasive…

5) This last one is my suspicion again, but I truly believe there will be coaching up-sells down the line.

Personally it doesn’t make sense that this program micromanages my progress this much unless there is a catch.

1 out of 10 stars. I’m gladly going to get a refund now. I don’t like programs which try to steer me in such a controlling way. Yes what they teach works, but there’s other programs which teach this too and will not be as constrictive…

Well I’ll tell you this much…

I wasn’t a fan of getting coaching from programs like these before and I avoided them to the best of my ability. But the one time I decide to finally give it a shot, BOOM, suspicions everywhere and it basically reinforces that paranoia I’ve had all along, and I’m right back…

Look, I gave them a shot and I personally didn’t like it, but at least now you also know what will happen if you get involved. Can you succeed with this program? I’m not saying it’s impossible, but just know about the experiences I had, see if you can deal with it and make your decision then.

Personally, I will suggest you try my alternative program to My eCom Club instead: Wealthy Affiliate. Why?

Well because every single bit of suspicion I have about My eCom Club doesn’t exist with Wealthy Affiliate. They don’t exactly teach drop shipping, they teach a different form of online marketing and to be honest, in my opinion it has a higher success rate.

And that is the end of my review of My eCom Club.

Shortly after I finished doing this review of My eCom Club, I was browsing through other blogs that were also reviewing this program. Some of them had said that there IS indeed coaching and that it can actually cost $2,000 with another monthly charge on top of that. That’s high ticket stuff I stay away from!

If this is indeed true, then boy did I dodge a major scam. I’m not saying those claims are real, but I have no reason to believe otherwise, based on my own personal experiences with this program and after seeing what others say, that only ended up confirming those suspicions, I am happily avoiding this program forever (and stick to my main one, Wealthy Affiliate). 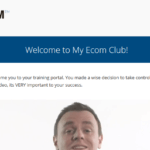 I do not believe in My Ecom Club based on my experiences. Here is what I know works. See my results.
Click here to test drive Wealthy Affiliate risk free and get your bonuses (no CC required)

8 thoughts on “Is My eCom Club a Scam? What Did I Get Into? My Review.”