Last week I celebrated my 12th year as a member of Wealthy Affiliate. As much as it has grown since it started, there’s still people who question if it’s a scam.

And I am going to openly talk about that in this article (no holding back!).

So is Wealthy Affiliate a giant scam or is it legit? 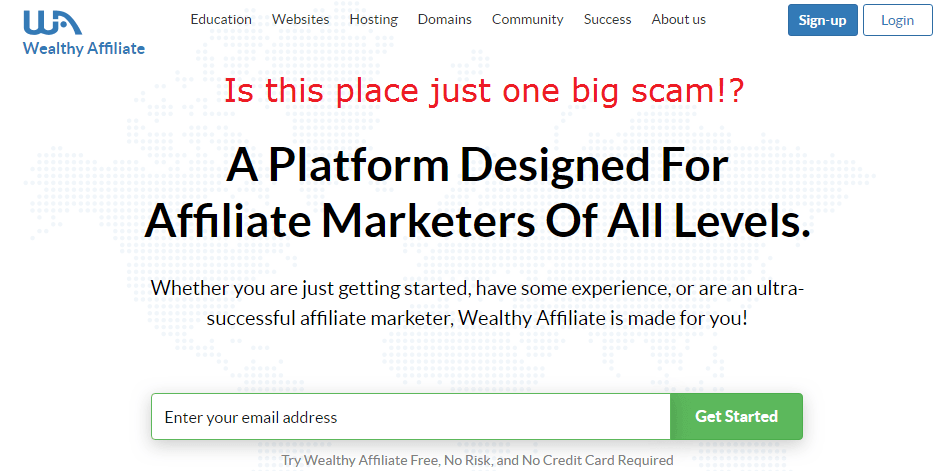 It is not, otherwise why would I be there for 12 years?

Yet, I would be insulting your intelligence if I asked you to trust my assessment of this program just based on how long I’ve been there.

What I want to share with you is something that no other member is talking about regarding this program and why there’s rumors of it being a scam. Once you understand this, you’re going to understand why it’s 100% legitimate:

3 reasons why people believe Wealthy Affiliate is a scam:

1) Competitors hate that it’s so good.

The industry within which WA operates is the make money online one. It teaches people everything from affiliate marketing to starting your own consulting online business and it teaches it well.

But while there are good programs like those, there are other, opposite type programs and communities out there which participate in the strategy I am about to unveil, make the people who follow them believe that the program is a scam.

What they do is, they piggyback off WA’s popularity. They basically blog about how their program is superior to WA’s in every way and often times, they make up stats and flat out lie about it.

And to be fair, there is the opposite end of this point where WA people also piggyback off competitor products.

The marketing principal of using another program’s popularity to pitch your own program isn’t anything new, nor is it illegitimate (as long as it’s honest) but there are people who misuse this strategy and end up spreading lies about WA.

They’ll call it a scam. They’ll say their program gives faster results, and they’ll have people believing that. And considering that WA also has some of the highest if not the highest rate of success stories, it’s no wonder many competitors dislike it:

2) Some of WA’s affiliates mis-promote WA.

There’s people within the Wealthy Affiliate University program who also engage in piggybacking, but in the opposite method. 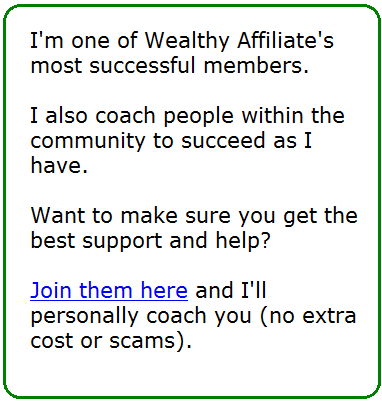 What happens is that there’s a small portion of affiliates within WA’s program who go out, and blog about other sites and do bad reviews on them, purposely.

Very often, these bad reviews are completely false and this gives the other program a bad name, as well as ruins their reputation.

The competing product owner and/or his fans/affiliates see that and then think that Wealthy Affiliate is teaching it’s promoters to do this and this is what makes them think the program is a scam.

I don’t blame them for thinking this, as this practice is disgusting. But…

And I say that because Wealthy Affiliate DOES NOT endorse nor teach it’s promoters to engage in such disgusting tactics. The whole program down to the very bootcamp program which teaches us affiliates to promote WA does NOT tell us to do this.

What these rogue people within WA do in their own acts of promoting WA is of their own volition and if they lie about another program to pitch WA, call them out on it, WA certainly does.

And I say this with 100% confidence because I’ve gone through the training, several times and I can guarantee you that what they teach is legitimate. Yes, they do teach about reviewing other programs, but the method by which they teach us to do this is through honesty and giving a program a fair look.

It is very difficult and honestly impossible to date to find any program that has the benefits WA does. Coaching, support, webinars, live help, hosting, SSL, free membership, ect… (full benefits explained here) and what the good people promoting WA usually do is, they compare another program’s perks to WA’s and very often if not all the time, they cannot compare to WA.

And I have reviewed a lot of programs and seen empty promises and training methods which are doomed to fail those who use it. When I see that stuff and review the program, I call it out on that.

But anyway, getting back to the point of #2, do not let people who falsely promote WA at the expense of other programs (lying about them) make you think that this is what WA teaches.

3) People within WA seek to destroy it, like this:

Bad apples are going to be in ANY program/group and while WA does it’s best to seek and kick them out of it’s system, they still come around through fake accounts, fake names and other illegitimate tactics.

There are people who purposely enter WA in order to piggyback off it’s huge member base and what these weasels do is they try to lure WA’s members out of the program and into their other systems.

There have been people caught trying to “steal” WA’s referrals out of the system and into things like private high ticket coaching programs.

These people literally lie to WA members and tell them that they are professional coaches and then charge them high prices for this. The people think it’s all part of WA and get lured into it, then they find out they are scammed or see charges COMPLETELY unrelated to WA.

I recently had this with a personal referral I sent into WA. He contacted me privately and told me that he was seeing charges that are not part of the WA system, yet the names of those charges were connected.

What I discovered was going on was that some rogue parasite individual within WA was trying to get people out of the program and into his own membership system, whilst making those people think it was all part of WA.

I told the referral to immediately report the person who was doing this, to contact the REAL owners of WA and this problem was resolved quickly.

They will never charge you extra for coaching.

Their pricing is as follows:

As long as you are a member of one of these things, you will NEVER have to pay extra. If you are ever quoted an extra price beyond these numbers I just stated, the person doing that is trying to scam you, do not fall for it and report them at once.

Then you also have spammers. Yes every program has those too.

They enter WA and start throwing out links to their other systems, telling people to join it. Don’t worry, those people are kicked out quickly and this is why WA has a 100% NO spamming policy.

So yeah, there’s bad apples out there who utilize WA’s good reputation against it and then people think those bad apples are a reflection of WA itself, it is not.

Everything I said about WA may worry you, but know this:

With everything I just exposed about what goes on behind the scenes, you may think that WA is some sort of cesspool with bad apples running around trying to scam members.

This is absolutely not true.

In fact, the likelihood of you encountering these bad apples yourself should you decide to join is very rare if not impossible. Considering this place now has over 1.5 million members, you are unlikely to see these bad apples, and even if you do, trust me, they will not be around WA for long.

The bad apples who pop up every now and then are quickly reported and kicked out of this place. That’s something you can 100% expect. This place does it’s best to keep itself clean and helping people learn legitimate ways to build their own online businesses.

And as a whole, this program prides itself on its legitimacy an I stand with it 100%. Remember, I’ve been there for 11 years people.

But I wanted to disclose all of these things that lead to the bad rumors being spread so you know what’s really going on.

This place is 100% legitimate but before you make a final decision on joining, please read my full story with it including everything I explain regarding what WA teaches and what you can expect from it:

With all this being said, if you are a member of WA, or are on the fence about joining it, and/or perhaps you heard other rumors that I didn’t mention here, please let me know below so I can address all of that.

I can 100% guarantee you that joining this place is a safe choice for learning to make money online.

One more point: I personally know the owners.

I consider myself to be very fortunate to know the creators of WA, namely Kyle and Carson who I have met with numerous times during their annual Wealthy Affiliate Las Vegas conference and because I have done so, I have been able to get to know them better and let me say, both these guys are awesome people you can talk to normally, have great conversations with and trust to help you out.

And because their ethics carry over to the WA platform, it’s why this program has been around so long.

26 thoughts on “Is Wealthy Affiliate a Scam? The Truth About it.”