After buying a membership into Profit With Alex, I found 5 huge problems with this program in making it work and received a refund. Here’s what occurred and I’ll tell you if it’s a scam.

Quick report on Profit With Alex:

Price: $97 discounted to $37 (just hit the back button on the sales page to activate it).

I did purchase the program (and shortly after got a refund).

There is potential with the software you get, but unfortunately, there’s very few methods to make this formula work and you’re given VERY limited and poor quality training to make this a success in my opinion. 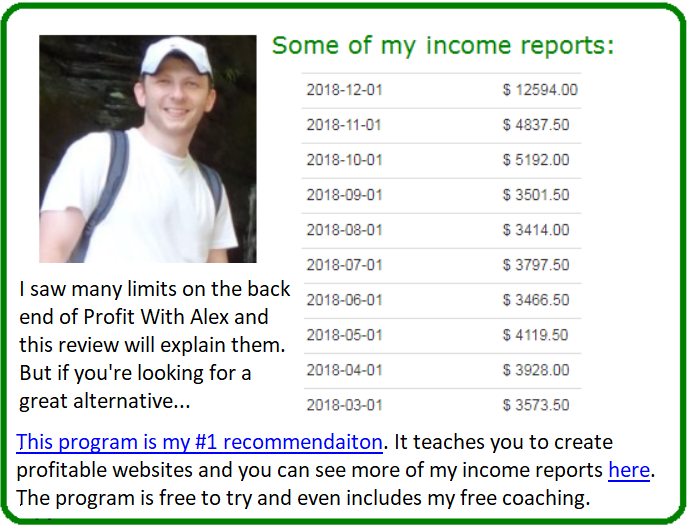 What is Profit With Alex? A quick review of the program:

Before I explain the problems I talked about in the title, I first want to touch base with what this program actually is, so here is the short explanation:

There’s 2 things that make up this program:

1) Profit With Alex is basically a program which builds eCommerce/eStore websites for you. You first need to buy the website before proceeding, although there is a free “sample” site offered so you can see a “preview”.

But after you buy the website or choose the sample option, you then select a subject on what you want the site to be made in (I personally chose GPS devices when I tried it) and what you get as a result is an eStore with products that you chose as the subject. So in my case, this software gave me a site that sells GPS devices.

That’s actually an interesting niche topic and it is profitable, but while that is the case, I will explain why through Profit With Alex, this may not happen.

Here is what my page looks like (After I made it through the program): 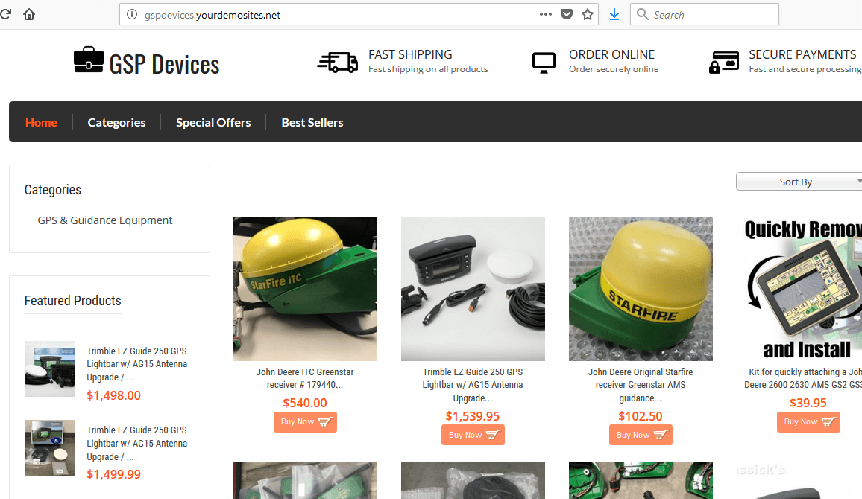 Now the store itself and every product sold on it is not yours, it links to pages on places like eBay. So in my case, with the GPS site I got, if someone visited it, clicked the link to buy a GPS device, they’d be transferred to an official page where they can buy it and if they did, I’d make a commission. That’s basically it for the software itself.

2) The remainder of the site gives you some training on getting visitors to your eStore through strategies like commenting on blogs similar to your site’s subject, making Facebook groups and posting on forums which also have the same subject as your site. But I will show the limits of these strategies and odds are, they probably won’t work either…

This program may sound good, but there’s big problems. 5 in particular:

These problems make Profit With Alex almost impossible for me to recommend. In fact, I can’t. Here they are:

1) The kind of eStore you get actually limits your potential success in multiple ways:

You basically get a pre made site with pre made content on it.

Now while that sounds good, in terms of ranking on Google, it’s not. Sites like these simply do not get favored by Google because of it’s auto generated content. I believe this is one of the reasons why the training inside this program doesn’t show anything in regards to ranking on Google. And on the note of training…

2) The training itself is very limited, short and thus difficult to make money with. 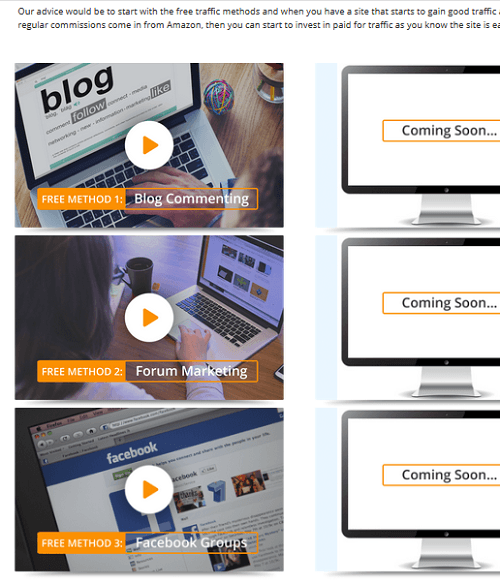 A) You are taught to leave comments on other people’s site whose content relates to the site you made. So in my case, since I made a site selling GPS devices, I would go around Google, Facebook and other places, find GPS sites or Fan Pages, leave a comment and hope people click on it.

In my experience this approach doesn’t work well. Most of the time website owners (including me) do not approve comments which have URLs in them trying to lead my traffic away from my site. So what we do is remove the link and keep the comment, which already destroys this strategy.

B) They talk about forum marketing. So this is basically like the first option, but you go to forums, not specific websites and also try to leave comments.

Just like in the previous section though where I said it probably won’t work, there’s rarely times where a forum will allow you to leave a link in your comments that you put on a forum post. This is considered spam in many areas.

C) They talk about making FB groups (finding groups with your site’s interest). This isn’t a bad idea, but there’s no corresponding training that shows you how to grow that group. So this training itself is limited.

So overall, I have to say with what I saw, good luck getting visitors to your site…

Also to add to this, many programs like this one are notorious for giving out bad training on traffic generation and it’s something that ruins a lot of potential success stories who seek to make money online.

They come in, ready to work, are ambitious, but the bad training leads them to quit and this is very unfortunate. However:

3) There’s not enough choices to make a niche site with.

One thing I’ll say that is good at first (but inevitably bad) is that before you make a website with Profit With Alex, you get to select a broad topic, after which you get to choose a niche topic to make a site on. I chose my GPS site after selecting electronics. Here’s an example: 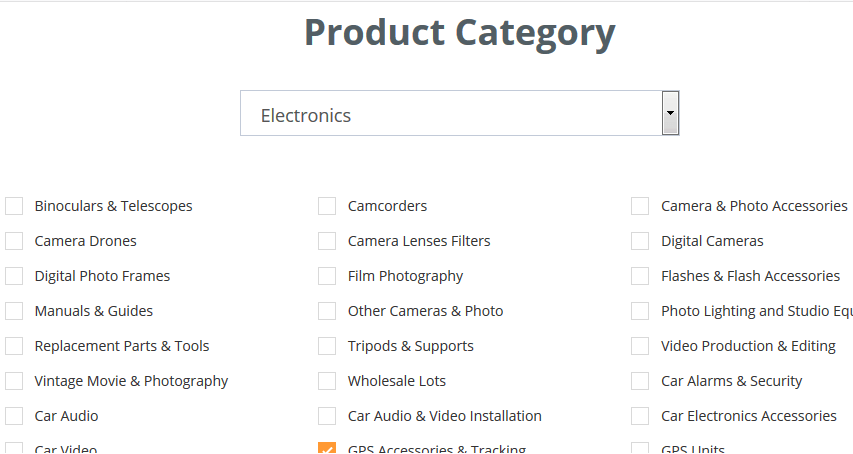 However, the drawback of this system is that there aren’t enough choices, despite the list being seemingly huge. For example, my first idea for a site with this program was to make one relating to making money online, but this was not a choice. There were other subjects I had wanted to make a site on, but no category like that was offered, which is why I defaulted to making one selling GPS devices. This leads into another problem:

4) If you can’t make a site that relates to your interest, you are inhibiting your progress further.

I have to admit. I know very little about GPS related subjects, but I chose it because it was the only one which popped up to me eyes out of all the choices. Had I gone ahead and tried to make the site Profit With Alex offered me work, I would have a very difficult time doing so.

In addition to the limited training already making it hard to work, mixed in with a topic I don’t know or really like, would really affect my ambition and further lead to less chances of success.

If you’re going to succeed, you NEED to make a website on a topic you love (try this). Any program that limits your choices like Profit With Alex is not going to be a program I recommend. Instead:

5) I don’t like the way this program is being sold.

The sales pitch of this program in my opinion was so cheesy and downright rang to me like a scam when I visited it. It says there’s 1,000+ currently watching, that it’s streaming, and a bunch of other things I didn’t like.

They aren’t real, they are auto generated graphics to give you those impressions (aside from the real news report they pasted with their sales page, which is not associated with Profit With Alex).

2 out of 10 stars. The site you get has limitations despite showing a lot of stuff, and the training is highly limited. I do not believe this is a program worth recommending.

My final thoughts: Try another program, not Profit With Alex.

While there are 5 issues I listed, I could name a few more with this program, but I’d rather skip ahead into something productive, like how to ensure you make money online, with better options.

The best one I have to recommend to you is this one, Wealthy Affiliate. You do get sites from them, but unlike the Profit With Alex sites you get:

One last thing I forgot to mention regarding Profit With Alex is that there are a few up-sells available, but I never purchased them. I know there is more training in that, but to spend extra money on this is not an investment I’d recommend, it’s just all the more reason to recommend Wealthy Affiliate yet again. 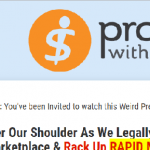 The Profit With Alex program

Profit With Alex is not recommended. Here is a FAR better program in every regard.
Click here to test drive Wealthy Affiliate risk free and get your bonuses (no CC required)