Facebook has never been a main source of income for me and to be honest, I have only ventured into it a little bit, trying out it’s paid ads and a few other things, but just today I came across a pretty interesting fan page someone made aiming to make money and while I’m sure it works somewhat, it gave me a lot of great ideas I will personally be using. 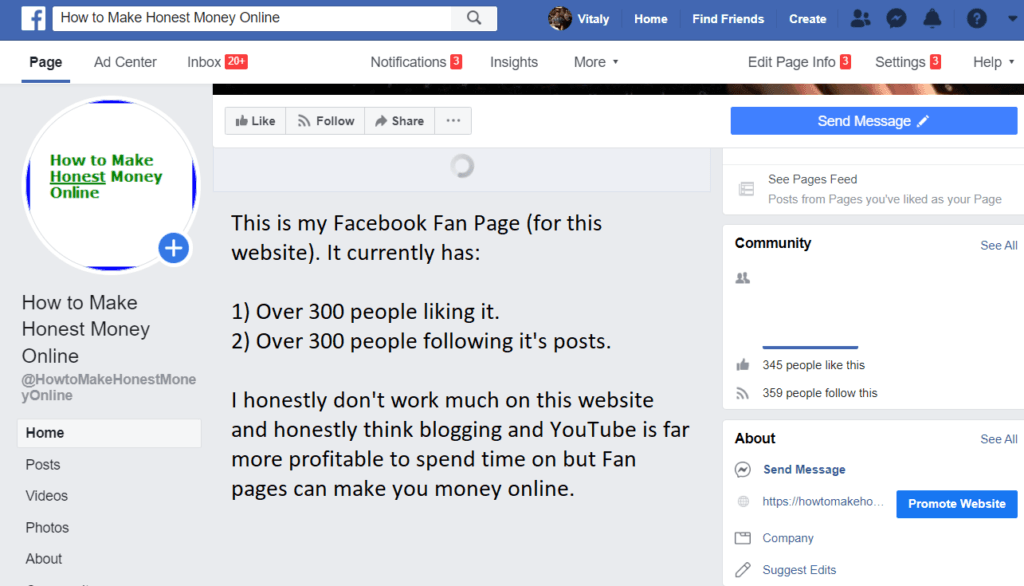 I have lost track of how many case studies I’ve done thus far (maybe 15?) but this is the first one where I actually look at someone else’s business rather than my own.

How I accidentally discovered this idea about making money of a Facebook Fan page:

For those of you who use Facebook, you may often see “Fan pages” popping up asking you to like them. Well this is what happened to me. The one that popped up for me was ironically about Wealthy Affiliate University.

But something was weird:

I am already registered as liking a Wealthy Affiliate page on my FB profile as you can see:

So was this an impostor site? Well this is where the case study dives into a grey area because after looking over it, I had found several things, some which gave me a lot of good ideas and others which made me question ethics:

So how is this page making money and how do you do the same thing?

One of the great things about Wealthy Affiliate is that it allows for people within the community to blog about anything, they success, their progress in internet marketing and things of that nature.

With each new blog a member makes (there are 100’s of new blogs made everyday), the original writers of the blog as well as other members can share those anywhere, including social networks like FB.

However the amazing thing here is that each blog carries the ability to create an affiliate link for the post meaning that if I wanted to share a success story from one of our members that blogged about it, I could go to that post he or she made, click on an affiliate button, get my link and then share it. Here is an example:

That screenshot is from a blog I wrote. The affiliate button is there and available and I know some people who have been using this post I made to put it on their sites as a way of trying to get referrals.

Do I mind this? Not at all. At WA, this system was developed with the purposes of promotion in mind so I’m fine with people using this to promote the program.

And that’s basically what this person’s fan page is doing which is why I said it’s effortless in my title. Now I don’t know how much money this person has made from doing this, but with 500 likes, I’m sure there’s been a few referrals going around.

You see what happens is that when people visit any blog on WA or the main site itself and they aren’t registered, this is what show at the bottom of the site:

And by joining, the person posting the links gets the credit so that’s what this person has essentially done. They have compiled and continue to compile various posts from WA and put it on this fan page.

Is there an ethics problem if this is encouraged by the program?

I have NO problem with someone making a fan page and doing this. I also think that people should experiment with this idea no matter what their niche topic because making these things is totally free and inviting people you like to join in and then promoting it is also easy (but sometimes it’ll cost money).

The ONLY problem in my opinion that I see with this thing is that this person is using the actual name of Wealthy Affiliate and their logo. I don’t know if the intention is to come of as the official site but it can confuse people as it did confuse me.

It is not uncommon in the marketing world to have people make these kinds of things on social networks to try and get sales. It’s basically piggybacking in the affiliate marketing world.

Now if the person made their own uniquely named profile and did this, I would totally be fine about it, but I just feel as though this is banking of the name of WA and if I were doing it, I would just choose a different name.

Would you guys agree?

Now onto how to make money off the fan page and doing it the way I’d prefer:

Now I really like this whole method because by combing the power of a high value niche site and sharing that content over a social network, I can get way more likes, shares and comments which will constantly keep boosting both aspects of the business, which is the SEO and social network part.

Having people from FB like my posts and comment on them on the social network or on my site still gives me more credibility as well as more sharing on FB which if they like will also appear for more people. Growing a following through the social network can really to amazing opportunities in the future besides just affiliate marketing promotions.

Occasionally, I would share things I found interesting from other blogs and (always) link to them. The only problem there is that it would lead people outside my fan page and most affiliate programs and other sites do not have the same marketing opportunities as WA in that give you affiliate links to bank of each and every member post.

But this is something that has amazing ways to create a new funnel of business for you.

One thing I did not mention in regards to getting more likes is that you can technically use FB’s paid ads to funnel people there, but the parameters you set there are more demographically focused so in my opinion, it would be harder to get people there, which is why I believe sticking to finding related pages on FB would be easier to get relevant fans from.