I’ve had my doubts about anything Vick Strizheus creates and one of his older programs, which I will review today: High Traffic Academy (2.0) is certainly on that list, mainly because of: 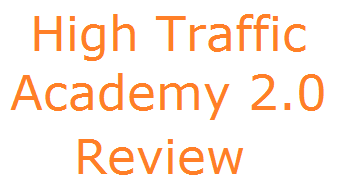 Price: $997. Possible up-sells or promotions into one or more of Vick’s newer programs may be happening in it too.

What do you learn? It’s mainly training on getting a lot of visitors to your site through what sounds like traffic generation methods “not many” know about.

This I personally believe is nonsense because if there really are such hidden gold mines of visitors, believe me, Vick wouldn’t be the only person talking about it.

And you know what?

And in my experience, the best methods are still the most obvious ones. I’ve made my income through that and it works just fine (SEO, PPC ads through networks like YouTube, Bing, Pinterest, ect…), even in 2019.

THOSE are truly the goldmines of traffic and I’ll be giving you my personal explanation of how I get tons of visitors to my sites below with proof that it works (no charge to you!).

The truth is that I did not buy Vick’s program. It’s also possible this program isn’t even in business anymore, but the bottom line is…

I simply don’t trust him because I just know a lot about his history, how he markets and what he delivers. He’s a GREAT marketer, but on the back end, I’ve heard and seen too many disappointing reviews to know better.

He’s not getting my $997 and this is my personal viewpoint, you should decide on your own, but remember, in this review, I will be sharing my personal strategies and I won’t charge you anything for it.

What do I recommend? While I will be sharing my free tips for generating visitors, I do want to note that my tips come from the training in this program and they share a lot more information and training on that: 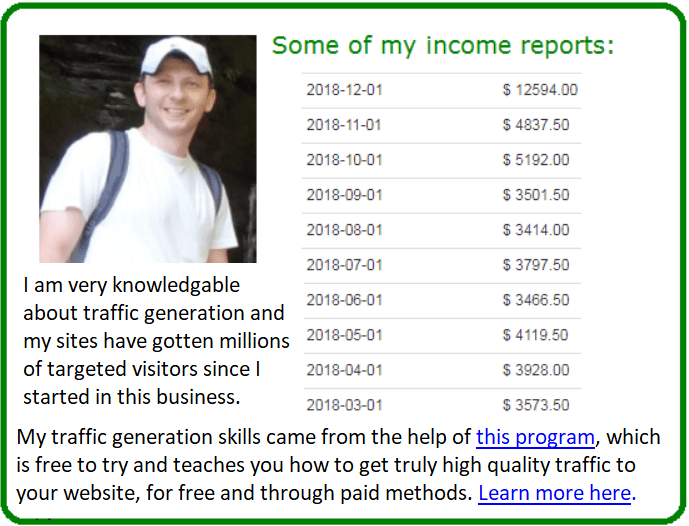 Just note that in this review, I’ll keep referring to that program over and over because it is a GREAT alternative, not just for Vick’s program/ (yes he has multiple ones), but pretty much any other out there which teaches traffic generation and profiting from it.

Understanding why I don’t trust Vick:

Many years ago, there existed a popular, yet scam MLM program known as Empower Network.

Vick happened to be one of it’s most successful promoters. The way he promoted it was that he created his own program outside Empower Network known as Big Idea Mastermind.

In that program he basically pitched it in the same kind of manner as he pitches High Traffic Academy 2.0, that being that he’ll show you how to generate mass visitors easily through master tactics, and that those people will buy and make you good money. So in short, through joining his program, you would be able to become a successful Empower Network Affiliate too.

The price of his program was I believe in the $5,000+ mark, but you could elect to buy it for other less expensive packages. Never the less, that was the first time I had encountered Vick’s name.

Doing a little digging pulled up some sad history about him unfortunately, the most obvious one being that he had legal issues with insurance fraud a few years beforehand, back when his name was actually Vitaly Strizheus (Yes my name is Vitaliy too, but there’s no relation, I assure you).

But I wanted to give it the benefit of the doubt…

Despite Vick’s history, I still decided to give his program/s more thorough look and also wanted to believe that perhaps he wasn’t doing that same sort of bad stuff I just explained. People are allowed to change and I am always for that sort of thing.

I’ve made mistakes in my internet marketing career, so I can’t judge this guy badly for the rest of his days for it, we’re all allowed redemption in my personal belief.

But anyway, despite omitting his history and looking into what Vick released later on, I actually learned that there was a very unfortunate trend going on and that was…

Vick would make one program after another with the same kind of theme in teaching people how to generate traffic, charge high for it and then remake a similar program later on with similar things. From what I do remember reading from others, the reviews on his programs were mixed.

So the troubling thing I noticed and came to the conclusion to was that Vick, being a great marketer just kept making one new program after another and hyping up how he would show you how to make money from it with the same line of marketing basically:

And eventually this message just died out whenever I would see another one of Vick’s programs. I mean think about it, say you joined on of his programs, such as the High Traffic Academy 2.0 and you paid a lot of money to be a member.

Then Vick comes out with a new program and charges more for it. In my opinion it depreciates the value of the old program and the more programs I see made by Vick with the same kind of message being pitched, the less I trust that message.

Most recently, in 2018, he actually made another which I was a brief member of: Four Percent Challenge.

And in regards to Four Percent Challenge, check this out:

If you need proof that I know about traffic generation, simply look up the Four Percent Challenge on Google. Guess whose page is ranked #1 organically? 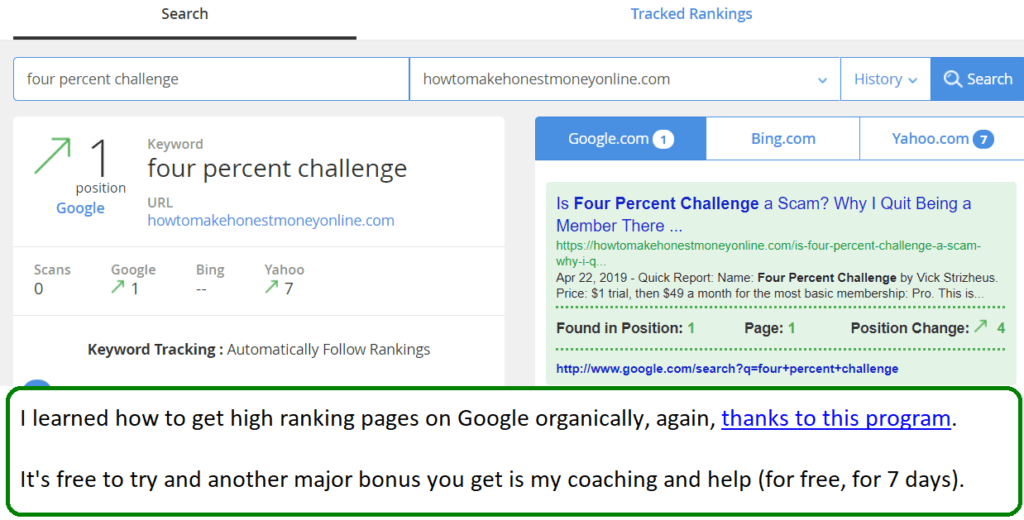 0 out of 10 stars. So with all these events and research being done, do you see why I’m so skeptical and reluctant to join High Traffic Academy (even if it’s no longer around)?

My final thoughts: Time to share my traffic generating methods:

People seem to think that traffic is a hard thing to get to your website. It definitely can be if you listen to the wrong people. The truth is that it takes work, and smart training to understand.

In my experience there are 2 proven method of generating tons of visitors to your site:

Organic traffic via SEO. This is one of the hardest things to get to your site, but one of the most rewarding. Here’s a snippet of how I do it:

The second is paid ads which get me visitors and while there are social networks you can do this through, I’m personally for using one particular network: Bing Ads. I get charged pennies for HIGH value visitors and clicks and all I do is I create ads and target VERY specific keywords like product reviews.

This always ends up costing me extremely little and gets me a highly relevant visitor each time which results in sales very often. How many clicks do I get, how much do I pay and how well does this work? Here’s an example:

I have used these 2 methods over the years to get any website I make visitors and those visitors are ALWAYS relevant and highly targeted. I honestly think that programs which don’t teach these 2 gold mine ways of doing it are doing their members a disservice

These are still 2 of the best if not the best ways to drive visitors to your site. All you need is the training to show you that and also to work hard to do it:

This is why when I see programs like High Traffic Academy 2.0, what is marketed in it, the price of it and the history of it’s creator, I’ve gotta say NO way.

And that is really the main things I wanted to explain in this review. I’m not going to call Vick’s program a scam, but that doesn’t mean I’ll be recommending it and I believe I stated some good reasons for that.

Update: Since I wrote this review, I’ve also gotten into YouTube Ads and Pinterest Ads, and also am focusing on growing my business through Facebook ads, all MAJOR sources of traffic generation if you know how to use it.

But if you’re just a beginner to traffic generation, let me tell you, free traffic is still the most profitable if you know how to get it and again, my alternative program will show you how to do that (And show you paid ad marketing methods too). 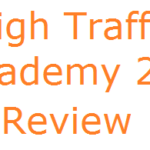 Vick, his history, and the way he markets things are reasons I do not trust him. I have used this program to make a full time income and it is truly legitimate.