Amazon has one of the largest affiliate programs in the world and the following 10 people I’ll show you today really took advantage of it and became success stories. 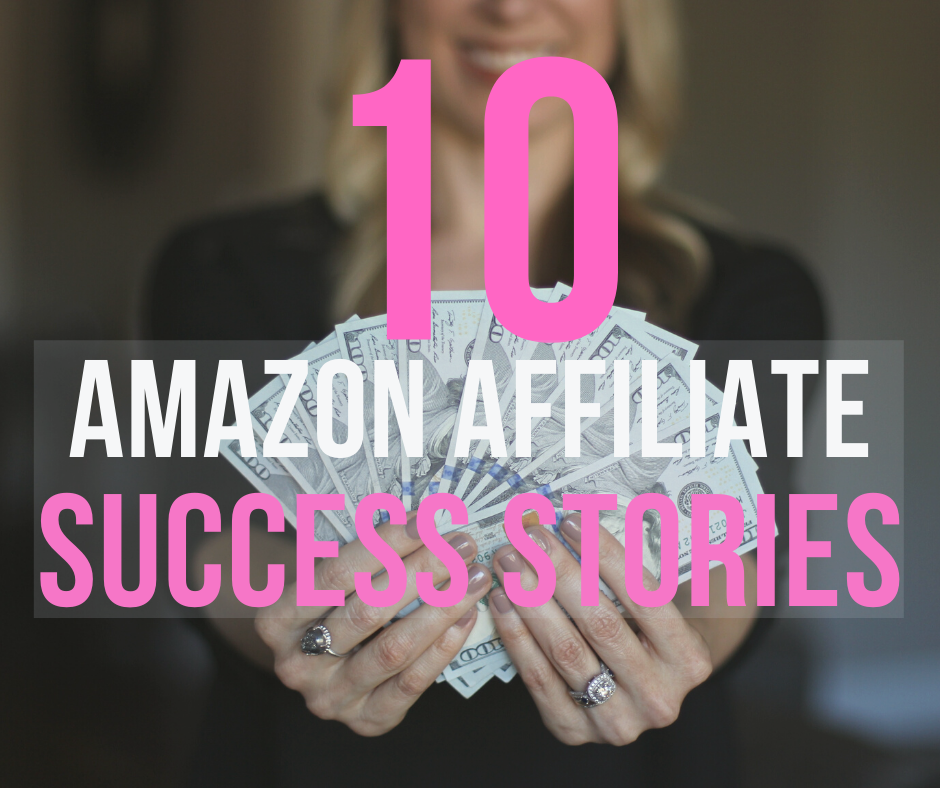 I’ll be citing my own affiliate success story with Amazon in this post as well, but with the other 9, you’ll see a diverse range of things they were promoting and making money with. Some people on this list made a little bit of income, while others are literally making a full time income with this network.

In addition to all the success stories you’ll be reading today, I will also be providing a resource for you to try for free that actually teaches how this can be done and in fact, a majority of the people on this list achieved their results on Amazon thanks to this same program.

Here’s a quick snippet about it before we begin: 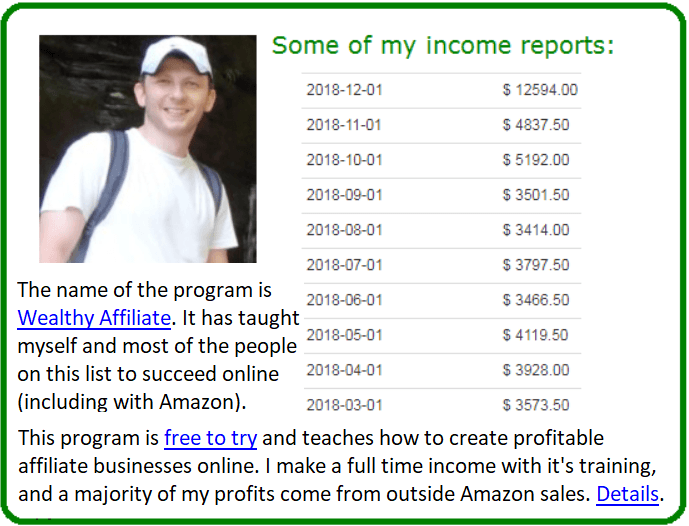 With that said, let me just briefly explain, for those who are new, how people make money through Amazon as affiliates and the basic idea behind how it’s all possible:

1) First of all, there exists a program called Amazon Associates.

It is the official network of this company which provides the opportunity to become an affiliate for the Amazon network. Here is a link to it.

They will ask you for a website so they can check that it’s legitimate and getting traffic before you can get approved and you must also submit very personal info including your social security number and other confidential information in order to be approved.

Not only is this info used to determine if you’re eligible, but if you are approved, it will be the information that’ll be used to send you checks from this network. So if you do feel that you are eligible to sign up, do so, and don’t worry about submitting the personal info. This network is legitimate.

But if you are disapproved, do these things.

3) If you are approved, you can then start promoting the products.

You will be able to type in the name of a product you wish to promote and will get a special affiliate link with your personal info encoded so that you’ll be able to get the credit once a sale is made by you.

Before you engage in this however, I would suggest, if you are new, to check out the Wealthy Affiliate program first for training on this as the process is not that fast or simple. Just because you have the opportunity to promote just about anything on this network does not mean you’ll be successful.

A majority of people who sign up and get approved for this network have no idea what they are doing, so it doesn’t matter if what they seek to promote are low cost products like books or high ticket products like these, none of that opportunity will matter unless you have a good formula set in place to make this venture work…

4) The general formula to becoming an Amazon success story explained…

What I personally recommend is one of two things to be in place (ideally both):

These 2 very basic things can honestly act as online businesses for you through which constant visitors and customers can come through and buy your recommended things on Amazon and many of the success stories you’ll be reading about in a short moment are using one, or both of these options.

Now let’s get to the Amazon affiliate success stories with all this in place:

I’ll be providing a countdown list, but there’s no particular income order here, so the success stories and the numbers will vary.

Zarina is someone who also got training from the same program I suggested above, and the path she chose was to promote expensive high ticket cameras through Amazon. Here is a link to her blog post on this and a screenshot of the success she’s achieved: 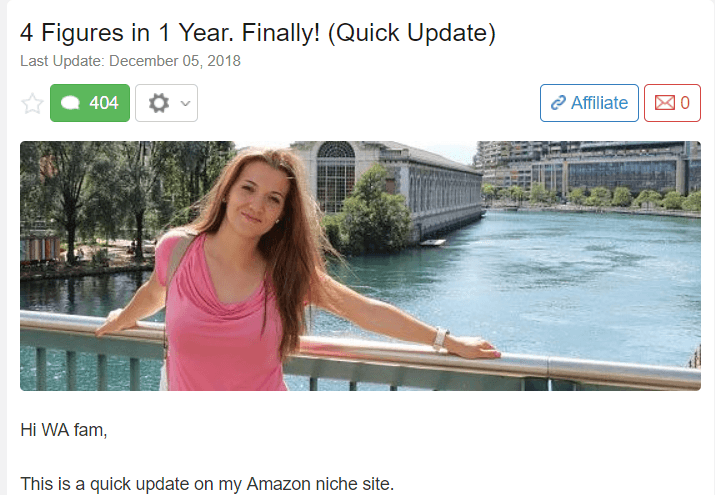 Now Zarina loves traveling and documents many of her travels. She decided to start a camera blog where she sells the best kinds of cameras for travel and this is what incentivized her to create her site and start promoting cameras from Amazon, the high ticket ones.

Now as with most blog sites, it took a few months to see results and if you read that blog post of her’s, you will see that the profit numbers climbed. The $1,500 I cited her making was in October, but in prior months, you’ll notice it was less.

As her blog grew, so did the sales she made on her profits. She was able to make enough to do a recent trip she documented here. Well done Zarina!

The next success story also comes from one of the many students within Wealthy Affiliate and his name is Josh. Now Josh is a bit more secretive about what kind of website he’s made to get the kinds of sales he has, but for the most part, he followed the same training, treated his website/blog as an online business and like Zarina, grew his site:

If you read his case study here, you will also notice a slow growth, but one that turned into very good profits, from a few dollars a month to over a $1,000 in the recent report he put up.

What I suspect Josh did (because this is really how it’s supposed to be done) is followed the same niche blueprint I laid out above, gave his blog time to grow and through that investment and work put in, managed to see growth. I am certain if Josh continues doing the same stuff and growing his blog, he will continue to see increased sales results.

Every success story officially begins with the first sale and out of the list of 10 people here, this will be the only one when I will document a single sale as being the success. But it’s still important and here it is:

In Kristian’s case, his site is still new and focuses on selling things related to child safety (details here).

While you may look at this example and think it took him 2 long months to get a first sale, the way this business works is that as time goes on and the business grows, the sales in crease and the examples above Kristian’s (Josh’s and Zarina’s) are proof of this.

Jessica is someone who is also new to being an affiliate marketer, but by applying the steps in the same program the others have, she has started to see great results. Here is her blog post.

Marinda is someone who actually promotes across different online networks, but her $500+ results you see in the screenshot above come from Amazon. She posts about it here, but overall, like Josh above, she is private about the specifics of which site she created to get these sales.

5) Jay’s “ridiculous” niche idea that makes a side income.

Jay is one of the most successful internet marketers I know (multi six figure earner) who possesses an incredible list of case studies where he demonstrates how niche marketing can lead to making a full time income.

And I actually get coaching from him from time to time (see details). Now in his case, Jay created a website dedicated to selling football snack helmets to football fans. And every single snack helmet he sells, he does so through Amazon.

Here is his website where he does this through.

But what about income reports? Well here’s how his site does:

Monthly, it earns $100’s and during Super Bowl season, at least $2,000 during the month. Now this is one of his many successful online projects.

4) Sonny’s starting success in this. 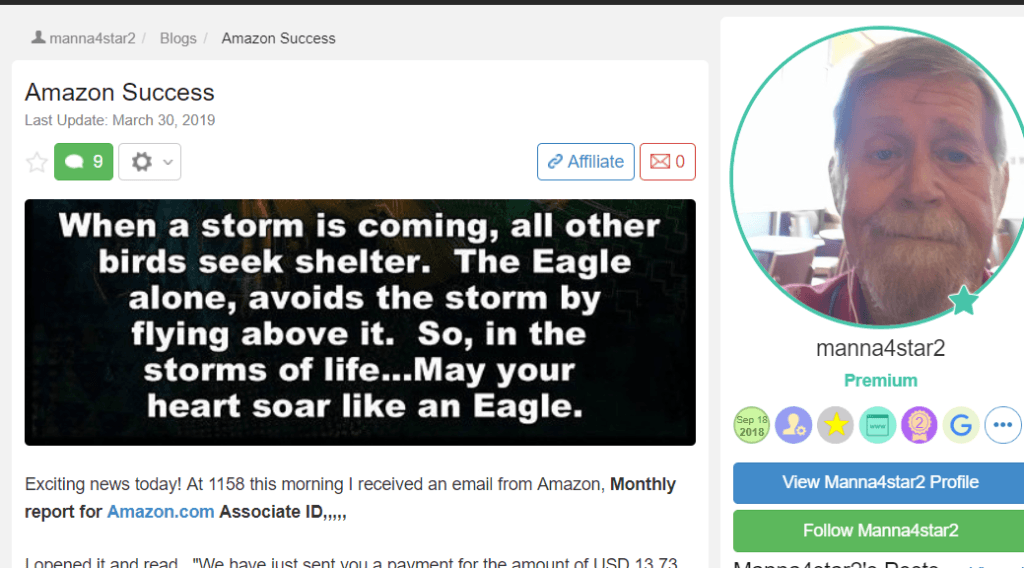 In this case study, we have Sonny, who also started his own site promoting things through Amazon and received his first paycheck through it. It wasn’t much, which is how most of these things start, but as I’ve said again and again with the other cases, it can and does grow with work.

James decided to make a niche site promoting kids books his son reads and this ended up getting him a number of sales, something which will grow so long as he expands the reviews he does on his site. Here’s the success story info.

2) My personal Amazon success story as one of their affiliates.

I, like Marinda and Jay above me also promote products and services across different affiliate networks and while Amazon is one of them, it is by no means my main income source. In fact, there used to be 2: Clickbank and Wealthy Affiliate, but now it’s mainly the latter and here are my results with Wealthy Affiliate.

Now as for Amazon, I still run a few sites which promote a wide range products such as trail running shoes, drones, hair supplements, ect…

So for a 2-3 month period, I earned a little over $100, which isn’t really all that grand, but if I have more time to work on my Amazon projects, I do.

Billy Kyle is a success story that I documented here, but in a nutshell, he created an entire online business selling drone through creating YouTube videos. Many of the drones and the accessories he promotes through his videos, he links to Amazon and makes money through.

I also explained how his popularity as a drone reviewer has led him to get other gigs in life which eventually led him to do drone related activities, reviews and filming opportunities with them full time.

The drones Billy sells are extremely expensive so the commissions he earns on them can reach as high as $100.

What to take from all of these Amazon affiliate success stories:

Now that you’ve seen that there are indeed real people making money as Amazon Affiliates, and that the results can truly reach great results, the important thing is to understand that anyone can do this as long as they use the formula I began with before I started talking about these people and APPLYING that formula.

The best program which teaches this niche formula I talked about is Wealthy Affiliate. Check them out here. And do let me know if you have questions about this formula or the people mentioned here 🙂