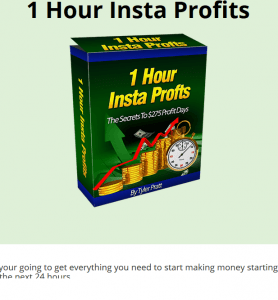 While I had doubts, I went ahead and purchased 1 Hour Insta Profits. Not only were my doubts realized, but the program ended up promoting even bigger scams that I will talk about in this review (as well as alternatives, don’t worry).

Price: For me it was $6.38, but apparently this price is going to get higher.

Pity, I would not charge more for it and there’s 2 up-sells which frankly I though were untitled and basically said they’d also teach you how to make money fast, which was kind of a repeat of the original sales pitch, so I didn’t buy them.

Theoretically making money within 1 hour is possible through this idea, but the likelihood isn’t that high unless you have a large following on a social network that reacts quickly to whatever new things you promote.

You learn to collect email leads via Instagram, that’s the formula.

Specifically though, what Tyler says to do is post motivational things to acquire followers on that social network but only promote to them through a bio page you create on that same social network, not in the actual posts where you put the images.

There are a bit more details and if you are into Instagram posting and have tried marketing through it before, you may want to check this book out while it’s cheap, but otherwise, absent that small strategy, most of this “program” is in my opinion about 90% of marketing other stuff of Tyler’s whether it be his up-sells or other promotions he is affiliated with, one of which I was very disappointed about…

There is 1 thing I liked about Tyler’s book:

Social networks in general to me have always been an interesting idea I wanted to try and market through. I have a lot of experience when it comes to delivering massive content and marketing through SEO, but in the world of social media marketing, I have very little experience and in Instagram in particular, 0 because I don’t even use it. The only thing I know is about how hashtags work really.

But there are 5 things I didn’t like about Tyler’s “program”:

Here’s the thing, the actual “program” is really nothing more than a short ebook. It’s 21 pages long, 6 of which are either an intro, disclaimer and promotion to one of the programs I have a big issue with (it’ll be one of the 5 things I disliked…).

And the actual content of that ebook is very short. The words are very big on every page meaning there’s about 2-3 paragraphs worth of content on each page…

But on the sales page, if you read it all, you’ll notice there’s “bonuses” he offers. Well there’s actually 3, and they are all other PDF books, but here’s the thing: They are PLR products. Of the 3 ebooks he provides, I found at least 2 of them on Google for free.

And I typically do not like PLR because the information is outdated and often lists different strategies that may not align with the main ebook. That’s what generally happens. In the case of the bonuses for this program (or ebook), the 3 bonus PDFs talk about other social networks like Pinterest and Facebook and ironically, they all had MORE content and information than Tyler’s main ebook itself.

2) If Tyler is so successful with this strategy, why doesn’t he show himself on Instagram with this success?

What I have done is personally taken a look at Tyler’s page on Instagram to see whether or not he was telling the truth about him having over a 100k followers and he really does and all the things he listed in his book appear to be consistent with his social network page.

This is a good thing to see, however, he never actually mentions specifically how to acquire that many followers. What he does do in his book is actually promote a separate signup to a webinar of his where he does show that 100k follower formula (which pertains to one of things I did not like) which is a whole other thing I didn’t like.

But specifically, what I didn’t see on his page is HIS own images. If he’s that successful and branding himself, what’s the harm in showing your success on such a popular social network? All you basically see is motivational memes of cars, women, beaches, motivational speakers and all of these images have very basic lines that are said about what it takes to be successful, but none of them show Tyler…

I want to know what Tyler’s success actually looks like and I don’t see it on his social media page, I only see other basic things that frankly…anyone can post. Where is the authenticity? In my opinion, this depreciates it…

Most bad IM products I buy online typically come with up-sells and usually these up-sells are at least titled in some way and defined as to what you’ll get, although most of them are garbage… 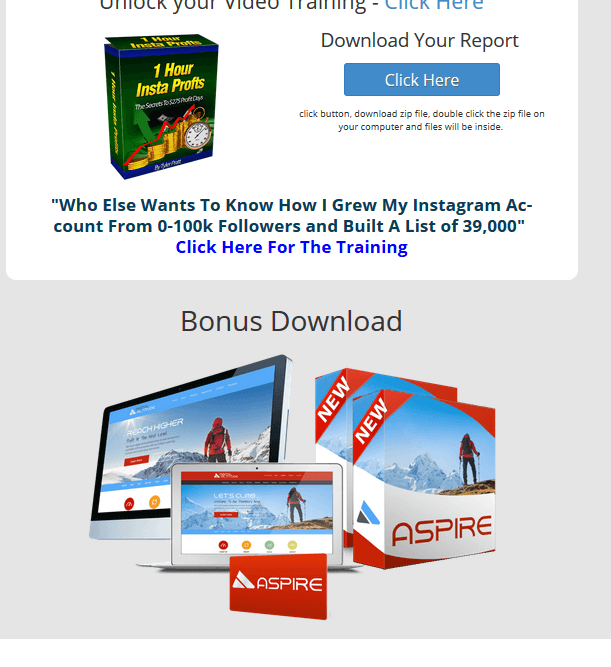 4) So many promotion within the product page itself.

Besides there being tons of links to Tyler’s webinar, there are also links to other products you will may have to buy. But there’s 1 he promotes several times…

5) He promotes Digital Altitude (FTC took that down).

This is what he promotes on his Instagram bio and you also see it on the eBook download page as well as several times within the main eBook.

I very much advised against Digital Altitude when I reviewed it and I still do.

Frankly the fact that it’s being marketed here is a bad sign for me.

2 out of 10 stars. Again, in my opinion, Instagram marketers should try the strategy, but I personally will not be buying more from Tyler considering there was so little given and much more stuff that I would have to buy.

It almost seems to me like Tyler just made this short eBook just to get people to his other promotions such as Digital Altitude. And this is my personal opinion, but come on, when there’s so little being given and the rest has an incentive for you to either buy or sign up to something that you’ll eventually have to buy, that’s how it ends up looking to me.

In my opinion what you have with this product, particularly the short explanation of the strategy is basically a middle of the sales funnel process, where you are told how to GET leads through 1 type of social network, but before that, you need to know how to get them and it’s not really explained enough in the main eBook, but it’s supposedly going to be explained in his webinar which is extensively marketed in his eBook (on every singe page…).

Honestly, given that I felt most of the this program did more in selling me other things than offering me good content, I would not be surprised if his webinar also followed that kind of formula, it is very common to see that from many marketers nowadays. I don’t like that, because I know what delivering real value means (like from Wealthy Affiliate).

I do not like marketing products that actually do more marketing to me inside the program than offer me good quality information.

Unfortunately, in my opinion, I feel this is the case with 1 Hour Insta Profits. 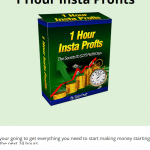 To see what a program with real value, awesome training and support looks like, see my top recommendation here.
Click here to test drive Wealthy Affiliate risk free and get your bonuses (no CC required)

2 thoughts on “1 Hour Insta Profits Review. Can it Really Work That Fast?”