After getting Commission Cartel, and finding out what was inside, I was very unhappy with my purchase and this review will reflect why that is.

Price: $16+. 2 usual up-sells and the same basic sign up funnel to a high ticket item.

When I found this program the first time, I was REALLY hoping I would not see Michael Cheney as being the creator of it because after BUYING his other programs and seeing how they repeat themselves basically, I knew what I’d expect from any future programs he made and sadly, since Commission Cartel is made by him, I was right.

Commission Cartel in a nutshell:

For the most part, at least for the regular program, excluding the up-sells, you get a strategy on how to promote “hot items” from these places: 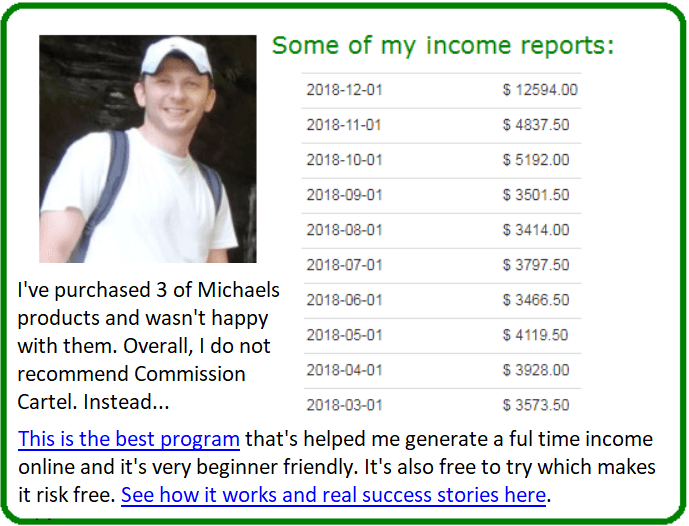 The 2 elements of “success” to Michael’s strategy:

You pick the hot item you want to sell, then use the traffic and sales strategy Michael provides.

I’ll show you the members area, but basically, the 2 highlighted boxes are where you learn about those 2 elements (yellow ones).

Much of the remaining area of the membership (red boxes) is locked areas which are only accessible to up-sell buyers: 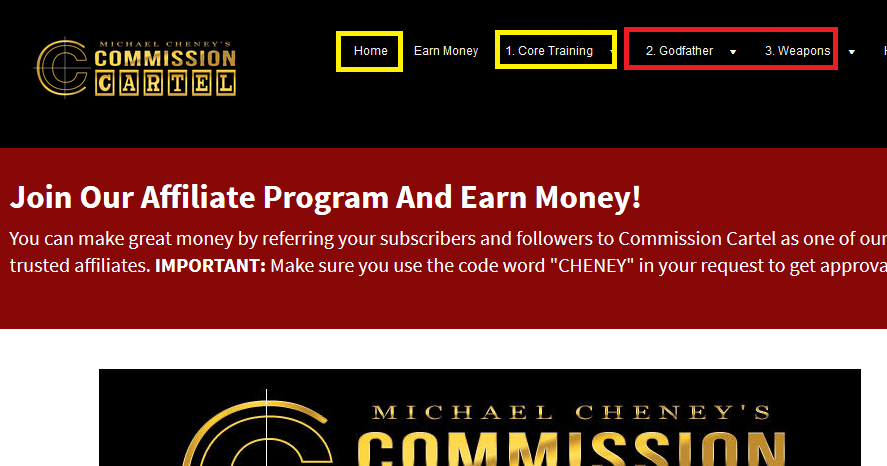 Now these 2 basic elements have ALWAYS been present in every single one of Michael’s products, so much so that the video he has on Facebook is the SAME and the sales page strategy is written/explained in a similar manner over and over again.

But overall the strategy, if you take out the analogies is almost the same. This has been one of the MAIN problems I’ve spotted in all his programs.

In fact, you’re welcome to look at one of the reviews I already did of these other programs: For Commission Black Opr, here is the review.

Pointing out the 4 “holes” in Commission Cartel:

I’ve never criticized it until now because I never felt comfortable judging something I haven’t tried, but with all the time that has passed since I’ve seen Michael repeat this strategy over and over and examining his personal Facebook wall, I have not seen any indication that this works (well).

For one, let’s be honest:

Michael is a popular and successful online marketer (but here are more famous internet marketers), but I don’t believe it’s because of that strategy, I believe it’s for another reason I’ll point out shortly, but the point is that in all his posts he makes, what would indicate to me that his strategy works is if his posts have a lot of likes, comments and possibly screenshots of these things working.

Instead what I see is truly a number of likes and comments, but from people who know him. In other words, what I feel is happening is that his brand name and popularity is what’s driving the participation of people to comment and like his stuff.

I personally have internet marketing friends who I sometimes see promoting their own programs. Most of the time, I find the stuff annoying to see, but I keep following them in case they ever provide new, valuable information to me for free.

Now these are established guys. If I saw a friend who I know isn’t successful doing this, an immediate unfollow would occur with possibly a lost friend in the process. That’s at least how I would do it (and I have done it).

Because this element is missing, I feel that the strategy will not work as well for you as it MAY work for Michael. I’ve always had doubts about this strategy and I’ve never seen proof of it working.

2) The sales strategies work, but it hinders upon the traffic coming in.

Michael does know how to sell, but the problem is this:

If the FB strategy he points to being a means to get the traffic doesn’t work, what difference does a brilliantly converting sales page make? It’ll get no traffic, so it won’t matter.

I seriously want to ask if anyone reading this has EVER been able to successfully use the FB strategy because again, I have never seen evidence of it. The only person I have seen point to it is Michael, but again, I find his reasons for success to be more so based on his name than on the strategy.

I get my traffic through SEO and I find that to be WAY more dependable and in larger amounts despite the fact that I don’t really have a following on social media. But I don’t really care about that, SEO works for me and I advise it for anyone who seeks free traffic, but to do it the right way through a proven strategy:

This same…repeat formula keeps being presented to me. I’m tired of spending my money on this and I’m going to demand a refund for this.

4) And then there’s #4 which I feel is the big picture of this whole formula:

I feel like all that Michael is doing is re-using the same structure in one program and passing it off into to each new product he makes, then email blasting it to his affiliates which they then promote to their lists, pushing his “new” product up the ranks of JVZoo and making it popular.

Michael rakes in new sales as do his affiliates and he also makes more potential customers head over to the BIG promotion (the high ticket one). Because he continually hits the top spots of sales with this approach, he can consistently keep making more sales on his basic program and then the high priced one, for which each person can potentially be worth $100’s and even $1,000’s.

It appears to be working very well for him, but when you factor in how the new products being produced are basically, in my opinion “refurbished versions” of the old, then you see where their may be a problem. If you don’t, you need to read my argument against Michael Cheney’s programs.

After reading all this and hopefully the history of the other products I’ve had to review, you may think that all of Michael’s products are the same. But are they?

Well the only thing that’s always been the same is his video about Facebook traffic for the most part. His traffic and conversion strategy has been written differently, but in the end, it basically is the same picture. There are cases where between each program, there’s some unique new things being offered, but it does not overshadow the main 2 elements I talked about, thus to me, they aren’t as seriously pushed.

I would say (in my opinion) that you get the same idea from the overall strategy to sell, taught in Commission Cartel as in any previous products by Michael and it is based on this that I am not a fan of his, nor recommending his products ever again until there’s actually something TRULY new being offered.

I do not recommend Commission Cartel, but I do recommend this program in its stead.
Click here to test drive Wealthy Affiliate risk free and get your bonuses (no CC required)

2 thoughts on “My Unhappy Review of Commission Cartel. Is it a Scam?”