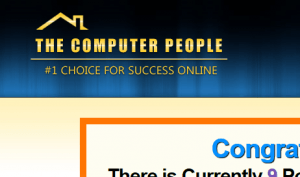 Another fake site, posing as though it’s new that’s trying to push a program that I already bought, didn’t like and probably refunded before.

What is The Computer People? It is really a work at home program?

The Computer People is basically a fake site, with a fake persona, pushing a mystery program on the back end, one that at one point was selling well, but had to change names to avoid a bad rep (that’s my opinion).

And the problem is, I already purchased it before, but the name of the program was different and the other problem is that I’ve encountered this type of scam so many times already that I actually don’t remember the exact name of the program you really get in this case (it happens so often that I don’t keep track of each program’s name).

Here’s proof though, that this program said that I already have it:

Since I’ve encountered this scenario before, here are the conclusions I have begun drawing from it:

3 big examples of fake marketing used on this program:

I’m not sure if you need more evidence on this stuff, but I always like to provide it anyway in case you have doubts on the way I review programs:

1. A pretend to be news site brought me to this program initially: 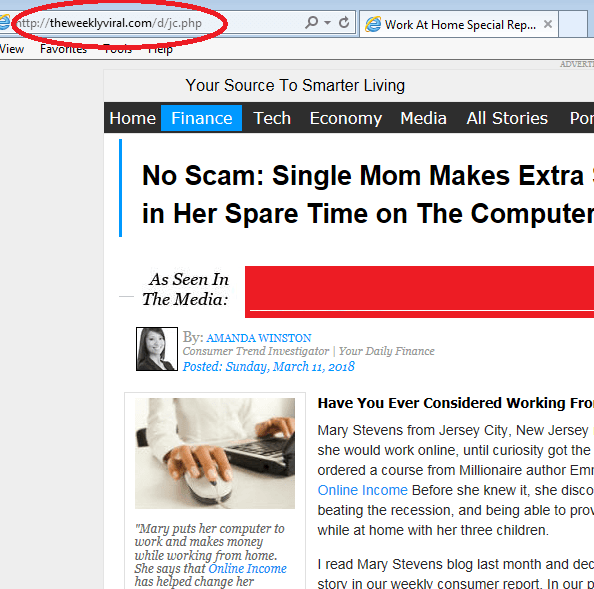 I have done several articles in which I cite these types of websites and expose them for being scams, because they pretend to be “official” pages where news is reported, but it is by fake personas, pushing fake programs such as The Computer People.

In the following case, this site was talking about a program called “Online Income” (see the blue hyperlink in the image) which when you click on, instead took me to The Computer People.

I bookmark these types of sites, then check them out once in awhile to see if the link changes, and it often does. Once that happens, I know there’s a new scam being pushed and this is what triggered this whole review in the first place.

Anyway, watch out for these places, they are not real news sites.

2. Karen Williams is a new name in the work at home industry, but…

The image used is not really her. How do I know? Well because that picture is used very often. In fact, take the following example:

I reviewed a program called Internet Experts and lo and behold, Karen’s image pops up there too! But it’s not a Karen Williams, it’s actually a Karen Johnson. And that’s just 1 example of who knows how many times I’ve seen that image:

Same sales pitch, same picture, same TYPOS even, same backstory. How much more can be said?

So unless Karen Williams has a lot of look a likes out there, all making their own work at home programs, I’m going to go ahead and say, this is another example of a fake persona.

One of the ways to spot a fake, low quality website is usually based on it’s domain name. You have .com’s, .org’s and those are usually the most common sites out there, but .info’s are actually the cheapest on the market.

In the following case, the program uses a .info domain name which in my experience indicates they aren’t going to keep it around long and you can expect this site to disappear very soon.

But either way, in this example, you really have to combine it with the other fake examples to get a bigger picture of why this entire program isn’t good in general.

Now in addition to these 3 examples, I could honestly point to several more and that’s even before you reach the actual program behind all of this, but I think with the fact that I’ve proven that I had it, made my point on why it’s not good and given examples of why this program in general is a fake one, I think it’s time to move forward, end this review and most importantly show you what works (we’re coming to it)…

1 out of 10 stars. Too much evidence and my personal experience to suggest it’s not worth getting.

My final thoughts: Be careful with these work at home programs, and what is a truly good one.

I can’t honestly tell you how many work at home programs are out there, because there’s constantly new ones popping up, but what I can tell you is that most of them are unfortunately like The Computer People: Low quality and/or scams.

Usually the bad work at home programs which say you can get started and make money fast are the first ones you should run away from. And they so easily change their names and marketing around, that by the time you figure out that you were tricked, it’s too late and their name has changed. Watch, The Computer People will disappear in a few days-weeks and there’s going to be a new one. I’ve seen this happen for years.

But anyway, enough about the negative stuff, you already know why you should stay away from that. The real question is, what should you try? Well here’s what I think:

Every work at program I ever review and warn folks about, I will always tell them to do one or more of the following:

1. Seek out information on WHAT the program is. Scam programs are extremely vague about this and only push the money making aspect.

2. Find out if the person who made the program is real.

3. Seek out one or more reviews on the said program to see if there’s complaints.

4. Read about the program itself on the site and see if it’s real. Some say they are low cost, but then end up costing a lot, some promise that you’ll make a lot of money, but fail to deliver and so on.

On these 4 parameters alone, The Computer People fails to deliver. However…

With all of this being said, thank you for checking out my review of The Computer People by the not so real Karen Williams. Please let me know if you run into her name associated with a work at home program or if you see that image of her on another work at home program site. It’s important that everyone who seeks work at home opportunities knows about this stuff and that I expose these scams. 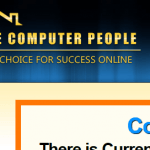 I already said all I need to say about this scam so if you want to know what I recommend that is NOT a scam, then this is the best program in my experience. See my results.
Click here to test drive Wealthy Affiliate risk free and get your bonuses (no CC required)

2 thoughts on “Is The Computer People a Scam or a Real Work at Home Opportunity?”