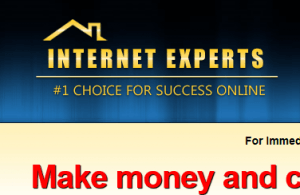 Price: $97, down sold to $67 if you click the back button enough times (that’s the lowest I could get it down to). Very giant likelihood of more up-sells if you purchase this program.

This is simply a reduplicated program that was once sold, and either did bad in sales, or scammed people so much that they got smart to it, and so the people who made it changed it’s name to Internet Experts in order to keep driving sales.

This program could have been called one or more names before, but it doesn’t matter, it’s still not good.

What exactly is Internet Experts (IE)? Well here’s my experience with all this:

This is a program that was duplicated off another, low quality program I reviewed in the past. They just took it, renamed it and made it seem like it’s new. It’s not and it’s not good either in my opinion.

I regularly find programs like this and even though this particular one had numerous signs it was a scam (I’ll explain them), I always attempt to purchase it anyway in order to give it a fair review. It’s just the fair way of operating.

However as I tried to purchase this program, it wouldn’t allow me due to them recognizing my credit card and saying I already purchased it:

But looking through my list of programs I’ve reviewed, the name Internet Experts doesn’t come up, yet they say I have it.

Here’s what’s going on (and it’s not good for them):

There exist very bad work at home programs out there in the online world that many of us call “get rich quick schemes” which are also commonly shiny objects in the MMO world. What they do is they pitch a get rich quick scheme to people, make a sale, but because they don’t give what they promised (an easy approach to making money), people start to think of them as scams (and correctly so).

So what ends up happening is that once the complaints pile up and people start spreading the word about the said program being bad, they simply change the name and re-market it all over again under the different name.

But whatever was inside the program stays the same as it was before (and if it was bad before, it’ll be bad again). This is just done to keep driving sales.

Here’s the easiest example to understand this process:

-Let’s say someone makes a program called Make Money Program A. The program makes sales, but also gets a lot of complaints because it’s generally bad.

-To protect it’s reputation, the same someone scraps the name, and make a new name: Make Money Program B and just keeps selling the same program, but under a different name.

-That’s ALL you need to know about IE, because that’s what’s going on here.

Some people in the online world call this bait and switch, others just call it a scam. Either way, it’s deceptive, it’s bad and it’s not something I’d recommend.

1) I already had it purchased and I can guarantee you this:

If it was good, I’d be recommending it. But I’ve seen this operation run on numerous programs before and they were always bad.

Now I don’t know if IE was connected to 1 previous program or several, and I honestly can’t remember which one it was, but I’m telling you guys, I remember the good ones, because there are VERY few of them and if this was good, I’d know it, and I’d recommend it. However, this is NOT the case here.

2) If it was really a good program, why change names?

A good program is going to have a name it’s proud of. Changing names indicates there were issues…

These programs almost NEVER tell you whose behind it. They usually make up a name like this and pitch it as a stay at home mom who needed to find work, blah blah blah, all that heartfelt nonsense to get you to believe them.

Furthermore, that image you probably saw on the sales page, which made you think the lady was a Karen Johnson just happens to be used on these types of sales pages, for different named programs and those programs often use that same picture but with a different name. To name a few…Kelly Simmons, Heather Smith, ect…

It’s just not the actual person.

4) The pitch the whole get rich quick scheme approach.

Guys, I am actually an expert at making money online and I can tell you that it’s not simple. It may not be the answer you want to hear, but it’s the truth and at the same time though, you CAN make money in this business (this is the best program I recommend), but you need someone to show you how to do it legitimately, not promise you a fake promise.

And that’s just what get rich quick schemes are: Fake promises. If you see this or any other program pitch money making as something that’s easy, run, run the other way.

5) They deceptively utilize marketing words like “As seen on”, work at home special reports and other tactics.

These are all NOT associated with the program. The sales page shows you how work at home programs are seen on TV, but the report itself has NOTHING to do with Internet Experts. The “As seen on” logos are just used to make you think it’s legit, when it’s not. These are NOT associated together, but they want you think they are. Do not fall for this!

2 out of 10 stars. The only reason I gave this a few stars is because they actually didn’t let me purchase it again. That’s at least something honest about this program, but it doesn’t change that it’s duplicated and renamed from another, low quality program I already reviewed and didn’t like.

Throughout this review, I have said that there is a better option to make REAL money online. It is called Wealthy Affiliate and I have to say, before I found it, I was running into bad programs like IE over and over.

Here’s 5 reasons my recommended program is the one for you:

2) There’s real people behind WA you can SPEAK to (Including me. Get details here). Internet Experts uses fake personas.

3) WA tells you the truth: That you can make money online, but it isn’t easy and they’ll show you how. Internet Experts is lying to in getting you to think it’s easy.

4) I’ve made REAL income from WA (so have many of it’s 1 million+ members). Tactics used by Internet Experts indicate that they aren’t good.

5) WA has been around for over 10 years and has a great reputation. Internet Experts is just one of the many come and go, bad programs out there you can’t really count on.

I’m very glad I didn’t have to waste any more money on Internet Experts and that at least they were honest enough to stop me from buying their reduplicated program, twice. But that doesn’t mean I can give it a recommendation. You already know what I recommended instead and I know you’re going to like that alternative way more. 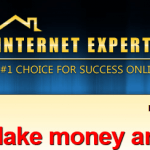 Yep, this program is not recommended! Here is what is if you are looking for ways to work from home. I do and this program works for me and many others, but it takes work.

4 thoughts on “Is Internet Experts a Scam? I Really Wasn’t Happy With it.”