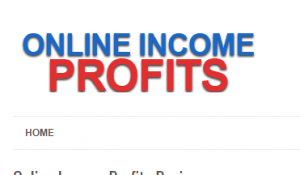 Name: Online Income Profits by (in my opinion a fake persona) Deborah Lee.

Price: Another one of those programs that starts at $49 and turns into $1,000’s in up-sells potentially (you reserve the right to not purchase those other things, but the way the system works, you can technically earn more when you buy more of those up-sells).

Well, here we go again…this is another fake site, redirecting to a big ticket program.

What is Online Income Profits and how is a fake site? The full explanation:

Allow me to explain it this way:

There exist a PLETHORA of websites on the internet that try to get you to buy their systems for a lot of money with promises of making easy money in the process. Generally, these places are scams. And here is a list of plentiful examples of these types of programs.

Now a lot of these same websites tend to promote certain types of programs, namely high ticket ones which will pay them the most amount of money for sending over visitors which can become potential buyers. Those are called big ticket promotions. So if for example, if I promote to you a program that costs $1,000’s to you, I can make $1,000’s in commissions.

And what a lot of the same websites do is they invent fake program names and when you visit their site, you’re thinking that you’re buying that program name, but when you do actually make the purchase, you get redirected to the BIG ticket purchase.

This is exactly what is going on with Online Income Profits.

In fact, there is no official site to this place anymore, just numerous third party pages promoting it, but each of them doesn’t lead you into Online Income Profits, it instead leads you to a big ticket program. Here’s the short breakdown:

Here’s just a few of the red flags you need to know about:

2) And neither is the supposed person, Deborah Lee. I’m sure there’s a lot of names like that out there in the world, but in this case, we’re talking about a Deborah Lee of the Online Income Profits program and neither are real.

4) Once you find the website and click on it, you will be sent over to another website and once you make the purchase, you’ll be inside a program called MOBE.

3) MOBE is the very expensive big ticket program I talked about when I began this review, the one I said can cost you $1,000’s. Actually the more real estimate is $10,000’s, but only if you decide to go as high as you possibly can with them. Now while I disagree with how much they charge, I don’t dislike MOBE nor call it a scam.

5) But what I do dislike is how MOBE is promoted extensively by a plethora of programs out there, both legit and scams and in Online Income Profits case, it’s on the scam side because it gives you the impression that it’s an actual program and all it ends up being is a link into MOBE. That is a deceptive practice I very much dislike.

Honestly, it’s extremely easy to set up the type of scam Online Income Profits has.

Allow me to explain:

Step 1: Become a MOBE affiliate (so you can promote it).

Step 2: Create a fake website with a fake program name. It would take minutes to do and promise people they can make some big, arbitrary amount every month (in this case, they say $6k every month…).

Step 3: Start promoting the fake website to people and give them the impression that for a low cost entry, they can make a lot of money ($49 in this case).

Step 5: If they buy those things, the fake website creator makes crazy money.

That’s basically how this whole thing is set up and I need to point out: I do NOT endorse this at all. It’s a form of lying to people as far as I’m concerned.

I don’t hate on real, legitimate websites that promote MOBE, as long as they do it honestly and I see too many of websites out there which do promote this system, but “neglect” to tell them about how expensive it can get. That’s certainly not MOBE’s fault, but the choice of the website owner. But…

If you join Online Income Profits, you will be inside the expensive MTTB program, and that will be followed up with the even more expensive MOBE program and if you can’t afford to spend the kind of money they pitch to you spending, I would not recommend them.

0 out of 10 stars. It’s not a real place, it’s just one of the many duplicate scams on the internet trying to, in a very cheap and deceptive manner get your money and since it’s fake, trying to pitch itself as real, it gets a well deserved 0 out of 10 star rating.

While buying expensive big ticket programs like MOBE and then promoting it can earn you big commissions, the real risks in doing so are the crazy up front costs and investments. MOBE is set up in a way where the only way to get big commissions is to buy the expensive packages available there. Yes you can stick to the lower end purchases, but then your commission potential drops to whatever the price of that purchase is.

If you don’t have this kind of money to put into the program, I would not recommend going further.

And you don’t need to think that this is the only way to make money on the internet, believe me, it’s not. While big ticket programs earn people big commissions, it’s a very difficult thing to reach and many don’t because it’s tough to do. Add to this a potential in losing all of that investment and it’s a big risk to take. It’s not something I would tell you with 100% not to take, but weigh the risks here before you do it…

However, while making money on the internet is tough, you don’t have to risk putting in these kinds of investments:

As someone who knows a different, and I would say better way, I suggest people start from a less risky way of making money online, see how the business works, see if it works for them and then, when they have the funds to examine if they want to get involved with MOBE or other high ticket programs.

Personally, as someone who has reached the point of making good money from the internet, I stay away from big ticket programs like these. However, you can decide on your own, but in my opinion, only after you know about the business and get involved with it, in a risk free manner. My recommended program is that risk free approach, and it’ll help you earn money. 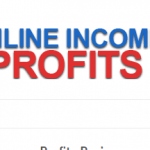 A well deserved 0 score goes to Online Income Profits, but if you would like to see a good alternative, see my 10 out of 10 program recommendation here.
Click here to test drive Wealthy Affiliate risk free and get your bonuses (no CC required)