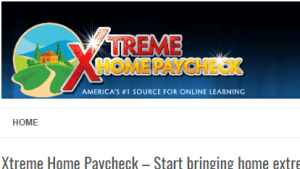 It’s just a program that redirects back to another program I already rated low (1 star). But I’ll explain exactly what I mean and what you need to watch out for…

So what is Extreme (Xtreme) Home Paycheck?

This program is nothing more but an illusion (call it a scam if you want), which leads you into another bad program I’ve already reviewed and even purchased (known as Automated Daily Income).

And what’s worse is that Automated Daily Income is also basically an illusion that leads you into the REAL program behind all of this: MOBE, a HIGHLY expensive and controversial educational, high ticket program on learning how to make money online.

Like I said, I did purchase a membership into Automated Daily Income and once I found out what’s behind all of this, I backtracked and requested an immediate refund. It’s been 5 days so far and it’s still “pending”.

So in short, you basically have a “chain” of programs, one leading into the next:

And each one leads to you spending more and getting scammed more basically. Here is the flow:

Ok, so why all this funny business? Allow me to explain:

gigantic scam system that costs a lot of money to buy into as I said.

And the point of buying into it and spending all that money is 2 things:

1) You get “supposedly” a great online education on how to be successful on the internet selling stuff.

2) You get access to the MOBE affiliate program which allows you (for each expensive you buy) to re-sell it as an affiliate.

Commissions can range from $50-$10,000’s in some cases, but again, you first need to BUY the expensive package within the MOBE program to be eligible to do this.

Where Extreme (Xtreme) Home Paycheck & the other program come into play:

The biggest reason Extreme Home Paycheck (and Automated Daily Income) even exist is because they are made by affiliates of MOBE, aka people trying to promote the program. They basically invented these programs as a “back door” into MOBE. See examples like 500 Cash Club which also do the same thing (there are MANY who do this).

Now you may be wondering, why not just promote MOBE outright? Well the answer is a few things:

1) By inventing programs with a fancy looking name like these, it’s easier to get people to think it’s easy money (marketing).

2) MOBE has a lot of controversy behind it (I am of the opinion that you should not spend the kind of money they charge for their education and can learn it elsewhere), so by not promoting it directly, but indirectly like these companies are, it’s easier to get people inside of it without realizing it (it’s happened to me on at least 3 occasions and I’ve had to get a refund, all 3 times).

3) As I said, MOBE pays HUGE commissions to it’s affiliates (at least those who purchase their expensive packages), so these same affiliates who invented Extreme Home Paycheck and Automated Daily Income, if they can get someone inside their program (and automatically into MOBE) and that someone buys the expensive packages of MOBE, then the original affiliate makes a huge commission.

So one can say it’s about making a lot of money in the long run. So it is worth it?

I say it’s not because as I already stated, I don’t believe it’s worth paying so much money for an online education, even if it pays you back so much (if you can make the sale/s that is) and I say this because I am someone who actually teaches and helps people do what MOBE helps people do, just for FAR less, and even for free.

And I promote it because it is the most legitimate option for getting an awesome online education on making profitable online businesses and I say that with 100% confidence because they helped me do it (among many others).

Not only is it free to try, but there is a plethora of help, support and awesome training that I would even say that you get far more value than in any program I’ve ever tried.

Now am I trying to say MOBE is a scam? I used to have mixed thoughts about this and the price it charged was why I never promoted it, but in 2018, my opinion changed to saying yes it is a scam, because a certain governmental organization basically said it was.

Here is what happened: 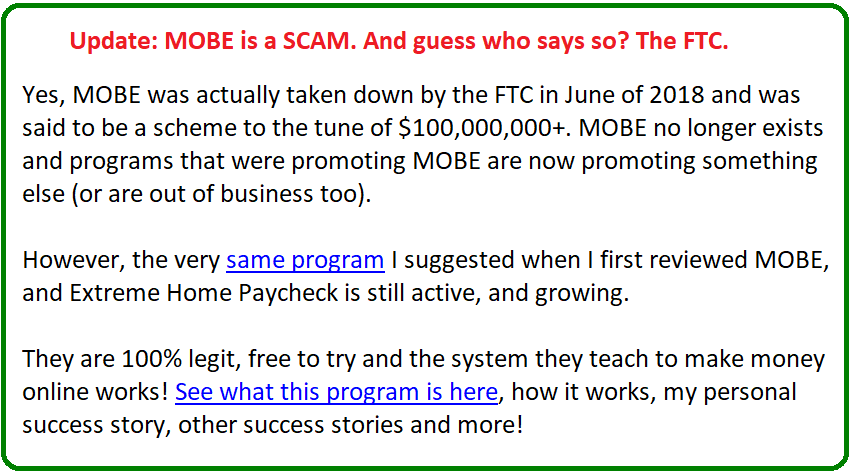 1 out of 10 stars. This is literally not even a program, it’s a sales page which leads you into another sales page and that finally leads you into MOBE, the actual system behind all of this. I do not rate MOBE very low, but I still do not recommend it.

Despite being an affiliate marketer who also sells things online, I cannot, in good conscience promote MOBE, even if it was still around. People deserve to know what’s inside it, what it costs and the risks involved and I say they are ALL too great.

I have my own history with bad programs and promoting this type of stuff to consumers is bad business for everyone (except the scam companies profiting from it).

And adding to that one of my original points on there being safer, FAR less expensive ways to learn this stuff, that makes it even harder to recommend this program. I’d rather get paid less recommending something that gives you great value and works, than something that costs a TON (and also works), but puts people in a financial risk because of that investment.

And that about rounds up my review of Extreme Home Paycheck. Now that you know what it is, where it leads, I’d like to get your point of view on all of this. 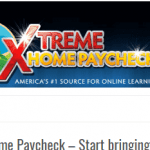 Yes, it promoted a scam, and that also makes this a scam. Here is a good alternative program that is legitimate though.
Click here to test drive Wealthy Affiliate risk free and get your bonuses (no CC required)