I want you to imagine a blank website, one you’ve just started or decided to start. You purchased a domain, set up a template/theme and now want to know how to grow it.

Where do you start? How do you go from an empty website to a fully functional, traffic driven page that gets loads of visitors and sales? Well that’s what we’ll go over here by showing you one of my websites and it’s 12 month growth report. 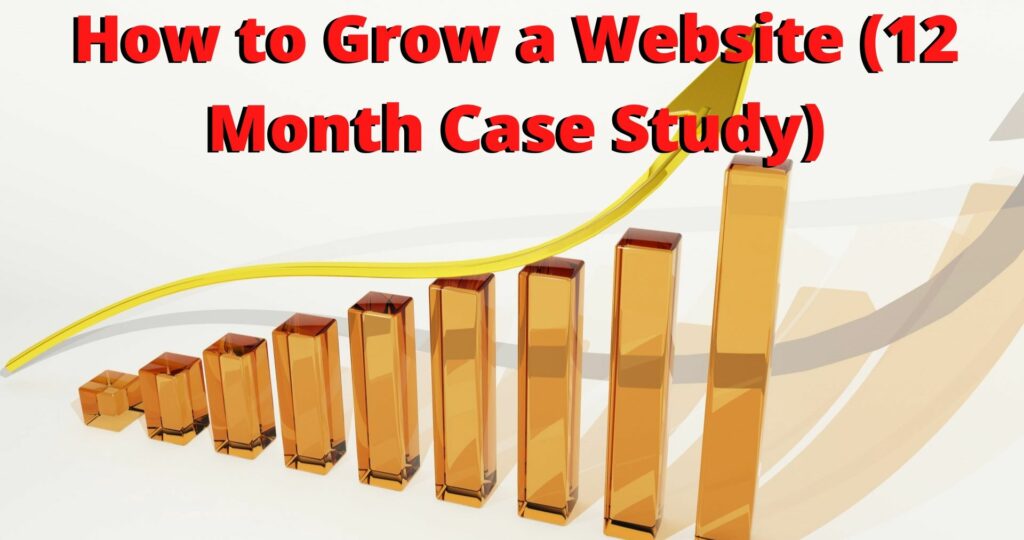 I’ve started many websites from nothing and grown them using pretty much the same formula over and over again and yes I will share with you that formula, worry not! So here’s a few examples:

The point is, the formula I’m going to teach you here works across the board, the key is to correctly execute it…

So what is exactly do you need to start the growth? Start here:

Your website needs to follow the following steps (that’s the most detailed tutorial I’ve written on this topic). Following them essentially comes down to doing this:

Again, the detailed tutorial gets into each of these above, but that is what you NEED to do to make your project grow. And how is it represented? Well:

Then guess what? Your website is experiencing growth. And I swear to you, no matter what idea you have in your mind on building a page on, that process will work for you no matter what. The key is putting in the time and effort.

Now there are other options available. For example, you can try paid advertising to get more immediate visitors to your site, which is also a sign of growth, but in that case, success cannot be measured by a simple visit, but rather if a sale is made and the amount of that sale is bigger than the price spent on the ad. So I won’t go into that. If you want to understand this other process a little better, read this.

Instead though, focus on the main one because that is the best and cheapest solution to going from an empty page to a thriving one.

Let me share with you an interesting example of this:

While the 2 big examples above I showed you are great, they are such big examples that to many who want to mimic them, the idea of trying to create something so large can be intimidating and the truth is, those examples took me months and years to get to what they are making now. And the truth is, you can do what I did by putting in daily work and letting things build through the steps I outlined above.

Whether it’s a small site or a gigantic one, the steps above do not discriminate, they work across the board, I assure you.

BUT for the sake of keeping things on a “doable” level (since I find most people think they can’t reach that, which by the way is a bad mindset), let me show you how an experimental page I started last year has done…

I’m trying to reach a point where I have multiple pages, each making a full time income. So far, I have 1 big one and another in the midst of reaching that. While the second one is rising and I am playing around with it (though not really into it), I am also looking at other markets and niches that have 2 things present: My interest and a lot of money flowing in it.

Last year, I did find a niche market that had just that, it was a topic on racing in mud. Here are the details on this niche. And so, I invested into a third page.

Now while this is mostly a hobby related page, I decided to really get into it and wrote quite a bit of content on it.

So far, it’s got 47 posts and this is what happened 5 months into the site’s growth, and if you read my article on ranking factors (which I will link below), you’ll know it’s a few posts shy of reaching a GREAT point where it begins to rank well and really, really start to rake in traffic and growth.

Now that example is actually quite small compared to my other 2 big ones (I mean we’re talking about a page with less than 50 articles vs a big one which has nearly 600, big difference…), but just about anyone who devotes the little time I did into it (and a little more, which is what I am aiming to do), you will find that the rewards are exponential.

But let me get into details on what has taken place…

What happened was this:

Obviously, I started with 0 on everything, no traffic, no sales, nothing. But as I began following the formula from above which really came down to keywords and adding content whenever I had a chance to, I began to see the following results…

In the very beginning of your website growth, it is going to be slow, very slow actually. That’s why in the above picture, I got less than 1 visitor a day, maybe one visitor every 3-4 days. Not good obviously, but remember, follow the formula.

And I did. So here’s what happened next. 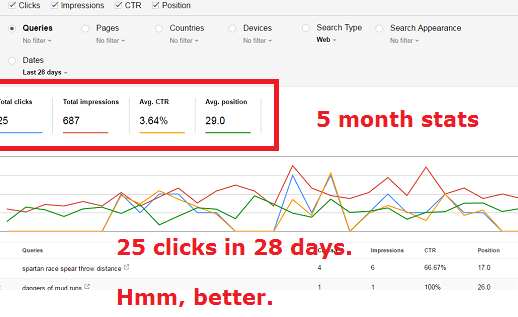 Alright not bad, now at that point I was getting around 1 visit a day. Now compared to above, this is 3-4 times better in terms of results. The growth is there, it’s not major, but it happening.

So again, I kept up with the formula, and now we move into the latest: 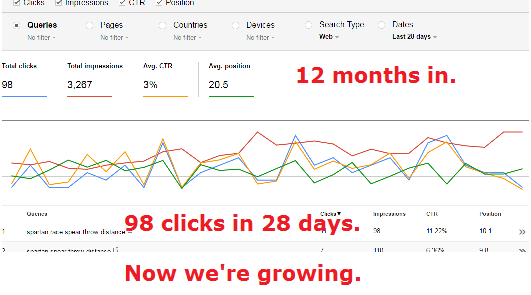 Well look at that, now we’re getting 3-4 visitors EVERY DAY.

What’s next? Keep following the formula…

Additional note: By this time, this example page has gained a lot of trust with Google, and I did mention in this post how it’s an important ranking measurement so that also helped me a lot in getting more traffic.

Here’s the report on the growth my website experienced in 1 year:

From the 3 charts I just showed you that recorded stats that took place around the 3, 5 and 12 month mark, we have:

Additionally, stats that were not shown in the charts above also show thing like:

My site has been showing 300% more impressions on Google. In other words, it appears for keyword terms 3 times more than it usually did and proportionally, it makes sense that this rise in impressions led to more increase in traffic.

And again, what is the secret? Follow that formula above. As my site grows and I guarantee you, after seeing that report and reigniting my interest in pushing forward with it, it will rise, I will continue to monitor this.

Now this page is reaching a point where I can expect to see a sale and as it keeps rising, multiple sales. Eventually this project can (and I believe it will) reach awesome income levels. I expect this to happen before the end of 2017.

And here’s the latest update on this niche site.

How much time did I put into that third site? Maybe somewhere between 50-100 hours over the course of a YEAR. I think for just about ANYONE, this amount of time is DOABLE.

But I will say this, it’s a fraction of what I should have put in, otherwise it would have done so much better and by now I’d be doing a post about how it’s making me enough to buy a house…but alas, due to the lack of attention and effort, here we are, with sizable growth a year later, but just not quite as much as I’d like.

Yet at the same time, what seems like little effort has shown to be so promising and most of the people I meet who truly take this business seriously and want to get my opinion on what to do, I find that they are around the same point with their sites as I am with this third one. And I tell them to keep pushing forward using the same formula.

I promise you that you can absolutely do this too. If you keep focusing on one project, you will eventually reach the point where it grows to being gigantic as the other 2 examples.

This obviously takes a lot of time, but as you saw from my third example, your effort piles up and only adds to the success. This process is only progressing forward and the more you work at it now, the better and faster it’ll multiply.