If you are considering using Clickonomy to get traffic to your site and money from that traffic, I’m going to explain why your results might be mixed due to the nature of Clickonomy and solo ads in general and what is a better route to go.

This program is undoubtedly legitimate but there are several problems I see within this network that are actually out of the control of the actual program itself, which make it hard to recommend and I’ll explain why…

Solo ads (which is what this place essentially is) are a risky form of business and there are in my experience better ways to get traffic and conversions. But if you can find a good solo ad provider within this network, then it can work out, but that however is very difficult to do. 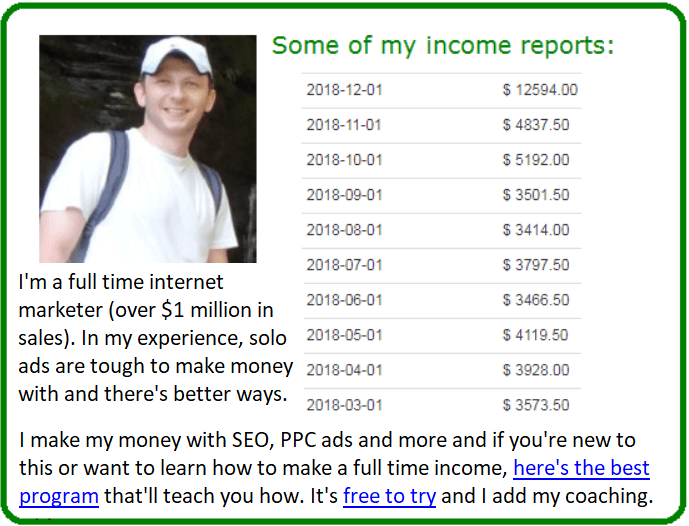 It is an internal network of solo ad buyers and sellers. As a buyer and website owner, you can select a niche topic, then be given a list of solo ad providers willing to sell you clicks for an X amount of money.

It can cost over $0.50 (sometimes less). And it can even be a few dollars depending on the quality of that visitor.

As a seller, if you own an email list, you can put it up on the same network and charge different people, different prices and make money that way. This place is basically a type of safe list network.

The program is made by Anik Singal who I respect and he has created email list guides like The Inbox Blueprint and training platforms like Lurn. However, when it comes to Clickonomy, I think the cons I will be pointing out shortly will explain why even if you have the best email list building experience, you may be better off using different approaches to the method than using a solo ad option…

1) Overall, the entire network is based on legitimate foundations and it is quite literally an internal economy where people exchange traffic for money.

2) The sign up is free, the starting up process is fairly simple too and it’s also easy to find buyers for whatever topic you want (mainly MMO) and also to be a seller.

1) The biggest problem with this network isn’t the network itself, it’s the industry that is solo ads and how difficult it is to make money through them.

2) You risk losing a lot of money (all whilst getting traffic). My general position is that solo ads mainly produce cold traffic. If you want something like laser targeted traffic, solo ads is not where I’d go t

Why it’s so difficult to make solo ads work (as well as Clickonomy):

Solo ads are very alluring because they can provide near instantaneous traffic to your website as well as the potential for quick sales. However, just getting traffic is honestly a simple task, it’s the kind of traffic you get plus the odds of it converting which is difficult. This is why, when practiced it is far more difficult to achieve sales from that outcome because of the many factors which make solo ads themselves difficult. Here’s a few examples of why it’s like this:

Solo ads are basically people with email lists selling the idea that if you pay them an X amount of money, they’ll pitch your product to their list. The problem though is that the people within that list may very well not be interested in buying anything from another person.

Another problem is that the people who visit your site through these solo ads are not clearly defined. Allow me to explain:

If I create a website, write content, get ranked on Google for a particular keyword and get traffic from it, I know for certain the traffic coming into my site from that keyword is specific.

With Solo ads, this is often NOT the case. Most of the time, you’re looking at broad people interested in broad topics like making money online clicking on your site and getting a sales pitch from you, but what they’re ready to buy or what stage of the buying process they’re in is a total mystery.

The concept of someone with an email list selling that list to other people is not one I am very comfortable with. Imagine yourself signing up to someone who you trust, then getting constant links and recommendations in your inbox on what to buy next and most of the time, those links are trying to get you to spend money.

It’s like spam and it also destroys the persons trust. That is why in spite of having email lists myself, I have never sold them out to anyone.

There is a “perfect” scenario though with this industry and that is the odds of finding a good solo ad person whose email list trusts them and the clicks you get can lead to them converting well, but the odds of ALL of these things aligning (and they have to if you’re going to succeed with it) is very, very difficult.

Many times, you’ll run through bad solo ad experiences and get junk traffic from the seller and even if the traffic is good, you need to have a good sales funnel set up to make it all work, but that itself is hard enough to do when you don’t really understand the type of traffic you’re getting from a solo ad seller.

And finally, the few times solo ads can work well is usually in niche markets like making money online, at least based on the things I’ve heard and seen.

4 out of 10 stars. I believe in this network, but I don’t believe much in solo ads and don’t think it’s worth spending a lot of money to find that 1 good seller you can rely on. 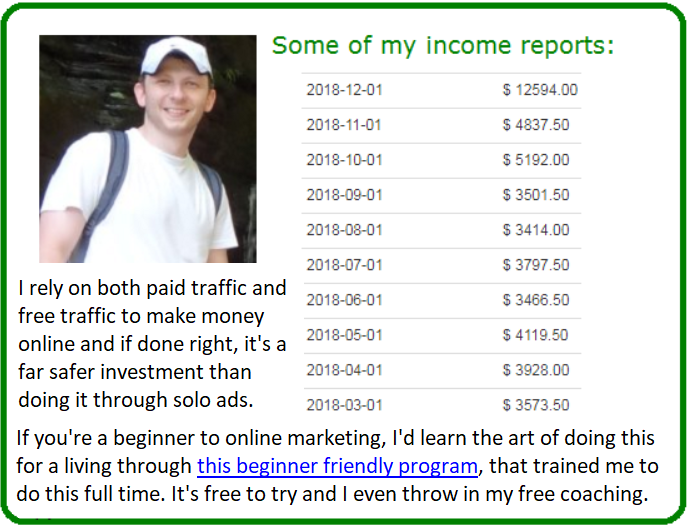 My final thoughts and better, cheaper ways to get traffic and sales:

I don’t engage with solo ad networks for the above reasons, but I do know that the alternatives I focus on are a lot more reliable to work with. Let me explain:

SEO: I write tons and tons of content for myself. Each article I write targets a specific keyword. Once it brings in traffic, I know that traffic is specific, far more specific than the traffic I’d get from solo ads.

The drawback of SEO though is that I have to wait for rankings to climb, but in the end, it’s far more worth it because of the accuracy and reliability of the actual traffic I get from it, plus it’s free.

Pay Per Click. While I mainly engage with Bing ads, I can tell you that you will spend much less money on paid advertising like this than you would for solo ads. Like with SEO, I also target specific keywords and place ads with them, which allows me to attract the correct, precise audience to my site. Now this is not a form of solo ads, it is a different method of getting traffic via paid methods.

These 2 things provided me with well over a million visitors to my site/s over the years and I always knew that the traffic was reliable (and the sales proved it, see the proof). The times I didn’t make sales from this was mainly on my end when my sales funnel wasn’t properly set up, but even then, I was at least making sure I was getting good traffic to my site/s.

With solo ads, you can make your whole sales funnel “perfect”, but end up getting the wrong traffic and thus lose money in the process. At least through my options, the traffic is right and the only thing I’m left worrying about is optimizing my sales funnel.

Experience has taught me not to rely on solo ads or the allure of quick traffic from it. I have found that to be an illusion in that industry with way too many question marks within it to make good money.

The options I’ve used on the other hand, for many years have consistently produced excellent results for me. But to make those options work, here is my recommendation:

While I do not dislike Clickonomy, I will advise being careful with it. Only spend money with it if you have it, but do not be surprised if your investment doesn’t work out there and if it doesn’t, remember, it’s not Clickonomy’s fault, it is the fault of the shaky foundations of solo ads in general.

Varies on who you buy clicks from. 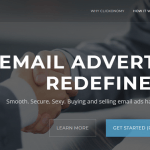 I recommend getting very targeted traffic to your site with other methods. This program teaches that.

6 thoughts on “Clickonomy Review. Does it Provide Reliable Results?”