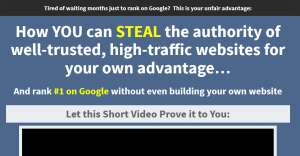 I know a lot about website authority subjects, so it was interesting to see Authority Snap’s take on it, which in my opinion is opposite of what I know to work. And this review will explain why.

I was considering giving it an extra star which would raise to a yellow flag, but I worry too much about the future of these methods.

There’s probably going to be a lot of people who disagree with my review of Authority Snap, especially since it’s not so positive.

Yes it is true that you MAY get fast rankings and you don’t even have to have a website to use the techniques taught, but at the same time, long term wise which is what I mainly look for in programs, I believe the methods you learn aren’t going to last.

Authority Snap in a nutshell:

You basically learn a “parasitic” way to do SEO by creating pages on high authority websites (or websites with high page rank) and then send backlinks to them. Those pages then rank very high which you can use to link back to an affiliate page, promote directly from those “parasite” pages (without a site) and use them for other various things.

How to really understand this method:

I think the best way to describe how this strategy works is to use an analogy from a previous method of SEO which worked very well many years back and that was using high PR websites like article directories. Before they received a massive slap from Google, they were utilized by many marketers to create fast and easy content which would rank very high on Google.

I could write a simple article (250 words or more) and expect to rank on the first page within days if not hours. A lot of what depended on this working was also targeting low competition keywords.

As this method became more and more popular, so did the amount of people who used it and often times, abused it. When this first began, you didn’t even need to have a personal website to link those articles to. You could just directly link to an affiliate promotion or anything else directly from there. This was during what I like to call the initial stage.

However, as the abuse of the system became more and more widespread, the quality of content decreased, more strict rules and regulations came into play. No longer were you able to directly link to affiliate promotions. Now you had to have a minimum of 400 words per article and couldn’t link directly to an affiliate promotion. You now had to link to your own website. This is what I’ll call the intermediate stage.

These new rules did make things a little bit more difficult, but it was still easy to abuse the system. You still had tons of people creating bad content and linking it back to their site. And it still worked because the high PR of the article directories remained, until Google stepped in and this is what led to what I call the final stage which is where most articles that were ranked high suddenly lost their positions and no longer could you depend on these places.

Authority Snap is following along the same methods:

I wanted to classify the initial, intermediate and final stages to make it easier to make my main point and that is that what Authority Snap is endorsing is just another version of piggybacking off high authority sites to get high rankings. Basically what they endorse that you do on authority sites is pretty much the exact same thing people used to do on article directories in the initial stages.

And what you should also know is that it really does work. What you’re seeing is just an evolution of the same strategy and the only part that’s evolved is which sites you’re using to get high rankings, but again this is all in the initial stage. You saw what happened as we progressed and how much less the article directories could do overtime. I feel the same thing is going to happen here.

So now instead of using article directories like Ezinearticles.com, Squidoo and other places, what this place recommends you do is make pages on sites like FB, Academia and other similar places with high PR. And you’re also recommended to use spammy backlink methods as well!

I’m not even kidding here. I read the whole Authority Snap ebook which is 27 pages long and they actually recommend focusing on quantity backlinks instead of quality (here’s how to get high quality backlinks) because you won’t be caught for the spam. This really goes against all the SEO practices I’ve been taught and I would never recommend you do this.

Again, this can work for now, but I would never risk using a major online business website with these methods. There’s no telling if in the future, those methods will fail and my site will be punished for this. If you don’t care about the risks, I’d still recommend you take major caution.

What else is included in Authority Snap:

Other than the 2 up-sells which I didn’t buy, this is what the members area looks like: 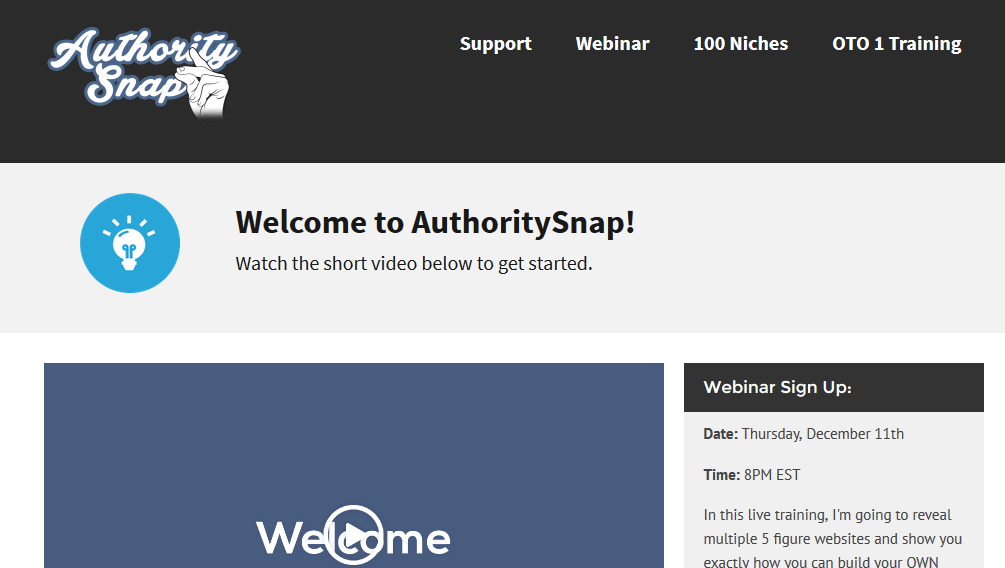 Other than the eBook, there’s another resource called 100 niches which is just a general list of niche (some of them are broad) that are supposedly profitable. I wouldn’t put too much weight on this since profitable niches don’t always guarantee profits. I have my own list of niches and here are 50.

There’s also access to a webinar. One of the up-sells I didn’t buy talked about new webinars being released and I assume you can definitely get some good information there, but I prefer to stick to webinars from my favorite place Wealthy Affiliate since they’ve proven to offer truly priceless value.

2 out of 10 stars. This program is not a scam, but I wouldn’t use these methods for any major website/s.

No matter what sorts of loopholes are found in search engines, be it article directories, backlinks or anything that is a way of trying to beat the system, one thing that is always happening is that Google is making changes to stop this and what happened with article directories in my opinion is also going to happen with the strategies listed in Authority Snap. It’s really the only thing I know will always happen and I don’t want to be around when it does.