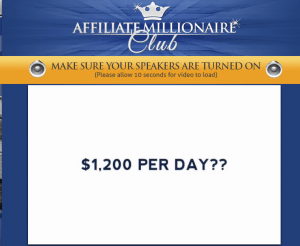 I didn’t like what I saw with Affiliate Millionaire Club and I will explain all of that in the following review.

I’m holding off on calling it a scam for now, but there’s a lot of problems I see with it).

I was VERY close to purchasing Affiliate Millionaire Club and not because I was confident the program was legit, but because I actually felt it was a scam, wanted to prove it and the further I went into the purchase, the more my gut told me not to do it.

I saw all the signs, the potential holes and based on everything that I’ve seen from this program, I cannot recommend it. This is all based on my personal opinion.

Affiliate Millionaire Club in a nutshell:

It’s a software which creates niche websites for you. You get to choose which topic you want your website to be based on as well as which products you’d like to promote.

But before you think this sounds like an awesome deal, hold up, because there’s a big risk to using this type of method for affiliate marketing.

There is also an affiliate link option which will input your link once the site is up and running. That’s pretty much it and the whole supposed purpose of this program in general is to create websites in a matter of minutes that will then rank high on search engines and earn you money (They will NOT and I will explain why).

While it is possible to create websites quickly, those that are made for you and have everything set up don’t usually provide the results you want them too in ranking, because they are duplicates and thus already doomed to never rank high because of that fact (duplication).

That’s the MAIN hole in this system.

Here are the other holes I see with Affiliate Millionaire Club:

1) The large amount of attempts to keep me on the page after I leave (exit pop ups).

I don’t like this and I see this happen with a lot of scam websites. You try to hit the X button, only to be send to a new sales page giving you a discount on the offer.

With Affiliate Millionaire Club, there’s more than 5 of these things going on. The original $67 price for the program was brought down to $27 (Gold package), with an extra silver package added in: 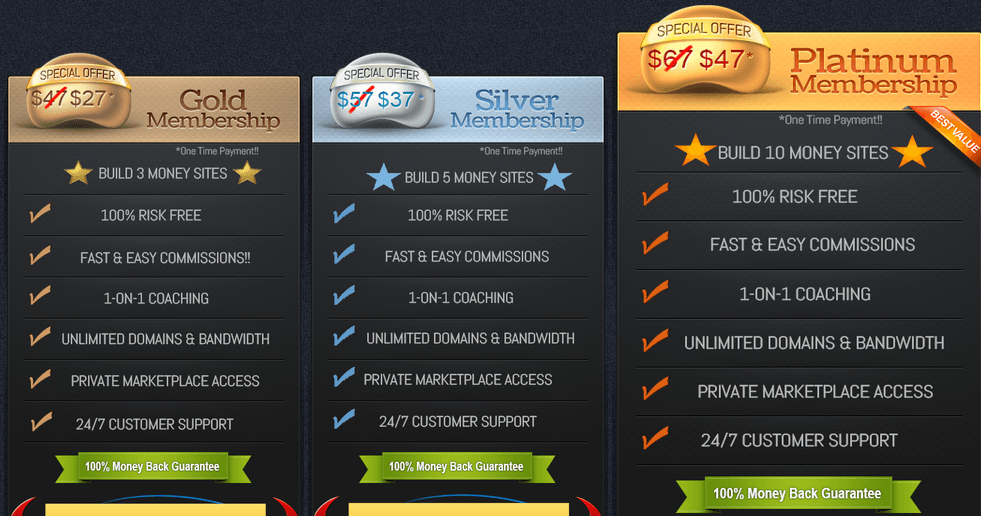 You do get to build less sites, but other than that the same benefits appear to be offered in every package. However while looking at this offer, I wondered why…

2) They say you get a certain number of money sites, but unlimited domains?

It just doesn’t make any sense.

Every single “money site” is actually a domain name within itself so if you only limit the amount of sites you can have (say 10 in the platinum package) while promising an unlimited number of domains, something is wrong here.

Either they’re not telling you something or they messed up. Perhaps it’s just a sales tactic too. Either way, it strikes me as very odd.

3) Potentially fake testimonials (well not potentially, they really are fake).

Looking at the sales page, I noticed some familiar faces giving testimonials (Fiverr people, they’ve become quite recognizable to me since I see them so often doing “testimonials” on these sorts of programs).

I believe some of them are fake and that particular one was a person who I’ve seen a number of times in other product sales videos.

He actually has a page where he advertises his services and says he’ll give you a testimonial. Here’s proof: 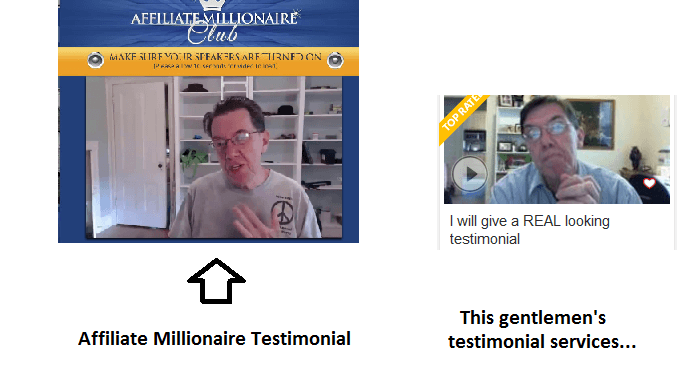 It’s common for these programs to use places and people that offer testimonials for cash but in my opinion, this makes the program look bad.

If it’s really as good as you say it is, why not let people want to review it naturally? And for natural, positive reviews, my top recommendation Wealthy Affiliate, has many of them.

The homepage has a feature where it will identify where you’re from through your IP address I assume. When I entered the site, it said there were only 8 spots left in my area and as I progressed through the video, it went down to 3. I later refreshed the site again and saw that number go back up to 8. Well isn’t that just nice? Here’s that icon (I crossed out the location for my own confidentiality):

5) I see holes with the sites you are given.

Back to the MAIN hole. Maybe, just maybe the sites this system creates are great, but there are a couple of issues I see with it:

A) I’ve never run into auto generated sites which had well written content. If this program is the only exception to that experience, then the next problem is that…

B) Many sites created are going to look identical. For SEO, this is terrible as I said earlier, because duplicate sites are punished by search engines. There is no exception and you are being lied to if you’re told that a duplicate site will rank high on Google.

C) I don’t know how well a 1 page site will fair in search engines. From what I’ve seen, the site you get is only 1 page and even if it’s not, you need to have A LOT of unique and high quality content on the site to ever get it anywhere.

From the way Affiliate Millionaire Club makes it sound, the sites are going to rank high right away just based on the software and the way the site is being made. I’m here to tell you this is not how it works anymore!

The website generator does produce decent looking sites, aside from the holes I just listed, they can be made quickly from that perspective. Yes it is beneficial, but if the sites are indeed duplicates, they won’t make you money from SEO, not in my personal opinion.

The good news is that there are alternative & much better website generators you can use to make great looking pages, but without pre-built content into the (this you will have to do yourself).

2 out of 10 stars. You get the website generator and it does save time, but in hindsight, this approach to affiliate marketing can create more problems. I don’t see there being much use of this program, nor potential. So I recommend Wealthy Affiliate instead.

So is the program a scam? In my opinion from the claims of making $1,200 a day, yes (And I have made over $1,000 a day through affiliate marketing before).

I don’t believe there is a way to make that kind of money with the websites this program will produce, especially not in the SEO game.

I also tend to be optimistic, even when it comes to programs like these so I try to find ways that Affiliate Millionaire Club can end up being profitable. The only thing I can imagine where it may work (and this is a long shot) is if you were to use the sites you make with this program and advertise them on paid networks. Then you won’t have to worry about duplicate content penalties.

Still, I would advise you not do that either. Focus on making your own sites with your own content. And most importantly:

That’s really one of the best programs (I think it’s the best) to learn to generate an awesome affiliate business. 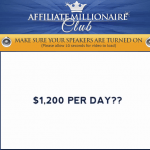 See a legitimate affiliate training program that has tons of great reviews and success stories here.