I am a real individual who makes a real passive income online. There are at least 3 particular ways you can start and make it too, which I’ll show you. 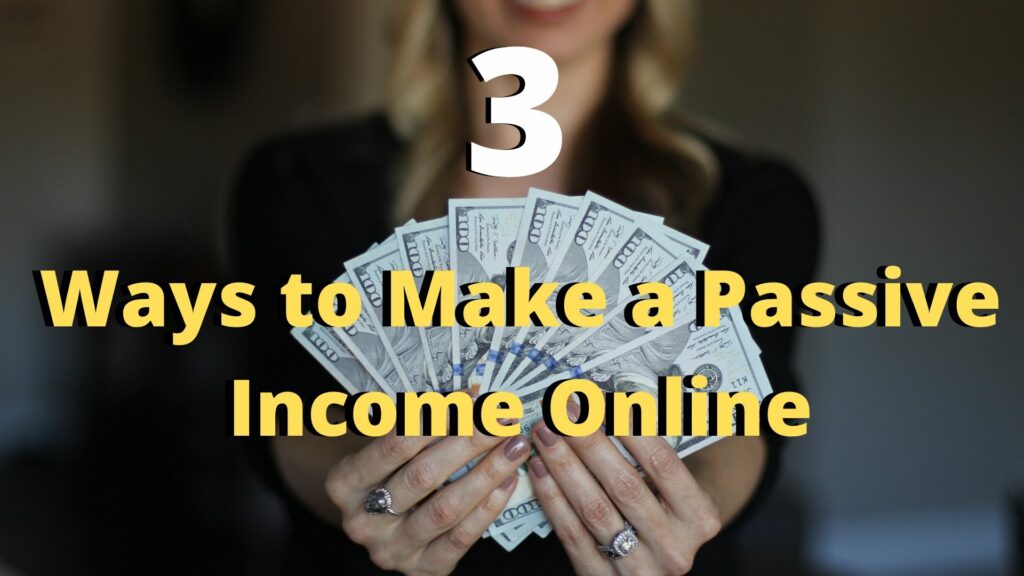 How I became successful at making a passive income online:

Currently, I average about $50-$60k a year through one of the models below that I use (I run a site that earns this much, here is proof). While I also have had multiple circumstances where I’ve made six figure incomes from the sites I produced, the issue was that this income was not passive and after the profits were spent, I was back down to $0.

So these events (Like this one where 1 page made me six figures) which were sort of like explosions in profits, always ended up at a dead end. Not to say that making this type of money was bad, it’s just that I didn’t have a long term plan to keep the money continually coming in and this is why so many businesses, even those which are offline fail.

They don’t produce a plan to make…passive income. And so these lessons that I personally experienced led me to recreate the way I make money online in such a way that I would be able to make money month after month without having one time profits come and go.

First, let me explain what I mean by passive online income:

Not everyone’s understanding of it is the same, so let me clarify what I mean: 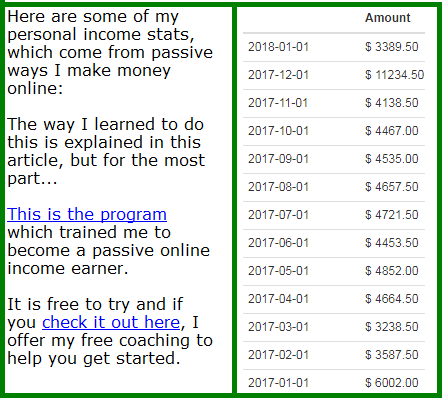 It is simply a method by which your online business generates a consistent, stable income monthly in a way where you don’t need to worry about how it’ll make money in the next month (passive, stable, consistent).

While I don’t really like to use the word “salary”, it is actually appropriate for this topic because even though with what we’re talking about here, you do earn money for yourself, the way it comes in is far more stable and expected.

For example, let’s take 2 people who set up a business on the internet:

-One person makes a successful site and it generates one time profits. At the end of the year, they make $100k, but next year, they have to figure out new ways to keep that income level up, since those profits came and went.

-Another person makes a successful site, but the profits he makes are recurring, so they keep coming back month to month, so when this person also makes $100k, he will also make that the next year from the existing sales he made the first year.

This is an example of passive online income and if you truly want to be able to run an internet business full time, it’s the latter model that you’ll want to chase.

After so many years of making sales across different sites, selling different things and see what works, I have come to the conclusion that there is a specific framework to creating a business that is almost sure to succeed and here it is: 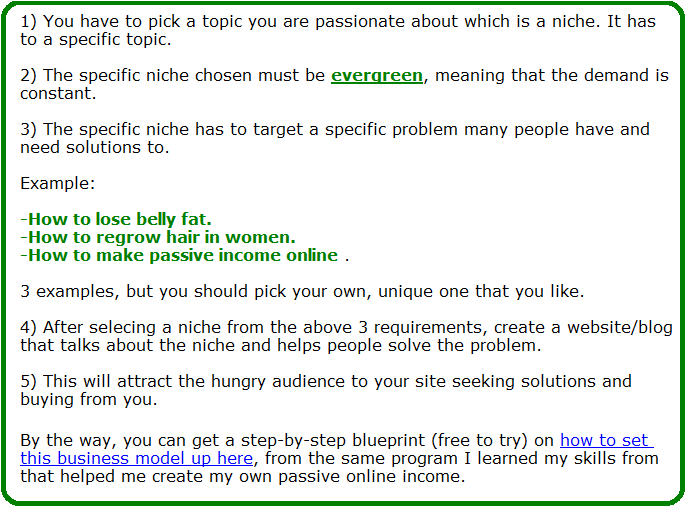 Now I have more examples of evergreen niches explained here, but I have said in many articles I’ve written and people I’ve consulted that this is the MOST important place to start because it almost 100% insures that you pick a business idea that you’ll be ambitious about and that it’ll be profitable.

Most people never start from these points of reference, and this is actually one of the main reasons you have that statistic on so many businesses failing so quickly. People just don’t know about these things, so they go in blind on something so serious, and are guaranteed to fail.

The golden model and the 3 ways to make a passive income online with it:

Now that we have the main, nearly insured way of success, it’s time to show you the 3 ways you can monetize with it:

When you correctly pick out an evergreen niche and start your site from that reference, you will essentially be creating a website in a HIGHLY, in demand market that is not going to run out of stream.

It will continually have new, fresh people coming onto your website and seeing what solutions you have to their problems. This opens the door for you to do what is known as affiliate marketing.

Simply put, with this model, you will not need to own any product, and you will not even need to buy any either, you will promote products from a company you register with which will pay you commissions to sell that for them.

Now in option 1, these commissions will be one time, but the fact that your website is within an evergreen niche is what will keep people and profits coming into it. Remember, the demand of the niche market is what creates the success of your online business.

My main form of earning is in fact this model.

Now if you read my story above about the $100k examples that came and went, it was actually sites I did affiliate marketing with, but just so we’re clear, those sites were not evergreen, they were actually capitalizing on temporary and really popular trends, and when they lost their steam, my profits lost theirs.

But having ran and made multiple evergreen niche sites over the years, the visitors I’ve had come to my site have been consistent and so have the profits.

How does one get visitors to their site? Well this is where I suggest this:

Traffic generation is not exactly something I can explain in a few sentences to you, but I can tell you that you can learn a bunch of that for free, through the program recommendation above.

Essentially, the goal is that you want people that are of your chosen evergreen niche market to see and come to your site, so they can buy your products. It’s known as laser targeted traffic.

Take the exact same model I gave you with option 1, but now add a better perk: Recurring commissions.

Now for every commission my evergreen site makes, the same people who buy, are charged monthly and I would be able to make even more from those same sales consistently.

Now if I make a recurring sale that’s $30, and the person gets charged every month, I can keep making $30 commissions of that same person.

Even if we lower that recurring commission to say $10, making it month after month would give me more than the initial $30 after a few months.

It goes back to that example of the 2 guys who set up a business but one went the recurring route.

I argue (and it’s tough to argue against), that a recurring business model is way safer and far more stable, because if a situation occurs where your business fails, those recurring sales will keep you going until you are able to recover.

Furthermore, a site that makes recurring sales provides the owner with a good nest to build off.

If I get my site to make $50k in profits a year, I know a huge chunk of that will be made again next year, so any new profits my site makes, will be adding to the existing sales I have from the recurring model in place.

In fact, that’s how the same $50k site I talked about making earned $200,000+ over a 4 year period (I learned to do this through a course called Affiliate Bootcamp). It had down periods, but because I had sales from previous years carrying over, my income stayed around the same amount.

Recurring sales are one of the pillars of stable passive online income.

3) Evergreen niche + creating/selling your own products.

Some people elect to create their own products and services, which is totally fine and sell those on the site. You can sell pretty much anything, from eBooks, to personal consultations and coaching on your website and as long as the evergreen demand is there, your products WILL sell.

The beauty of also having products is that you decide the price and keep the full profit.

Bonus option 4: Create a product, but let affiliates sell it.

There’s millionaires and people making a healthy, passive income online without even having their own evergreen website. What these people do is, they create a product or service within an evergreen niche, and let affiliates promote that for them.

In the process, they have the in demand product, but the affiliate is the one who does all the marketing and selling.

Considering that 99% of my profits are made by affiliate marketing, there’s a product owner in that equation who made money for free from my efforts and I’m totally fine with that considering I have the opportunity to sell something good for them.

If you wish to go this route, a good starting point would be Clickbank which allows for this exact model to be made. You won’t have to even set up any coding, they handle it for you.

What you will have to set up is a sales page so people buy it and affiliates can send traffic to though, but the marketing of that sales page, where MOST of the work happens for any online business owner is outsourced to the affiliate who does all that hard work.

The beauty of this entire business model is that you can approach it as an affiliate, a product owner, or even both and the fact that start up costs are so ridiculously low (seriously, you can start for $0, this program, Wealthy Affiliate helps you do that), there is so little risk that it’s ridiculous not to take the chance.

6 thoughts on “3 Ways to Make a Passive Income Online. How I do it.”