As a college graduate (2013) who majored in business marketing, I had the fortunate pleasure of learning different ways to traditionally run and promote a business.

While I was learning this though, I was engaged in running my own internet business so basically, I was simultaneously compiling experience on both fronts, more than enough to reach a conclusion on which one is better for you to focus on if you’re running a business.

Now getting the cliche things out of the way, let me s 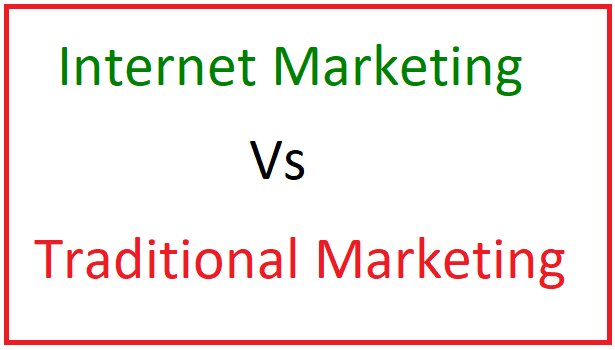 ay that while my opinion will be in huge favor for one focusing on internet marketing, there is definitely an argument to be made for someone to focus on the traditional form of it.

But if you are seeking a career to something in marketing, you are going to be able to do a lot more, get more and spend a lot less if you go the internet marketing route, and as things progress, internet marketing will likely fully envelope traditional marketing, so in other words, it is the future.

Allow me to give you some examples of both options:

Newspaper ads. There used to be a time when this was huge. Open up a New York Times or any major newspaper, and it would be loaded with pages dedicated to ads.

Today this method still holds value, but has extremely eroded since the internet became what it is today (extremely popular).

TV ads. Infomercials, commercials, things of that nature. Basically it’s another form of media advertising where based on a specific time and how long the ad is, you can reach a lot of people and let them know about your product/service.

Local ads (fliers). Everyone sees this and I would actually say this is still a great and cheap way to promote your business. Pay someone a little bit of money to stand out in the street or walk around and distribute word of your business to the locals. You may find some good customers looking for just the right things you’re selling.

Business card distribution. People leave theirs on cars in big parking lots, or distribute them like fliers.

Bulletin boards. You can find these in colleges, schools, community centers and other places where there’s a giant bulletin specifically up for these things.

Ads stapled on walls and trees in the streets. One of the most common things you’ll see, especially in a metropolitan area. From guitar lessons, to dog walkers advertising their services, and pretty much anything else you can think off.

Basically these options are what used to be to the most popular way to market a business/service and depending on the type of budget you had available, you could start from something very small (if you have no budget) as putting up ads on walls and trees all the way up to getting a commercial run on a major television network.

The goal would obviously be to advertise yourself, get clients and make money and these different options above represented a marketing approach to reaching either a local or large scale audience.

In some cases, it would be more beneficial to advertise locally depending on what you were running vs spending a ton of money on running a TV ad. But still, there’s plenty of options and they are still viable.

However, the internet came along a good 25 years ago (well even before, but it exploded after the year 2,000) and ever since, it’s growth has been astronomical and through it, advertising methods developed to also help people reach their designated audience/clientele…

Owning an eCommerce website/blog. This is a huge, ever growing industry. With BILLIONS of people worldwide being on the internet at any point in time (and it’s still growing), people from all around create their own websites/blogs to sell pretty much anything imaginable.

Their blog is their business and I can tell you, it’s nothing to take lightly as websites can honestly bring in WAY more money than traditional home/office businesses. I would know, I’ve been doing just that for years. Here’s my background.

The goal is people who run these blogs is to basically get visitors, or what we in this world call “traffic” and the more of it we get, the better.

Advertising on Bing/Google/Yahoo/YouTube. While the internet has billions of people on it, a massive chunk of that audience (traffic) spends it’s time looking for stuff on these 4 platforms.

Consider these 4 places like the TV media above, except you can deliver your site/business pitch at a MUCH cheaper price if you know what you’re doing.

Creating products and selling them on eBay/Amazon. These are 2 of the most gigantic eStores on the internet and many have made businesses out of selling on there as well as promoting products from there.

So which is better? Well here’s some important generalizations:

1) The internet is growing and steadily destroying traditional media. More and more people are flocking to the digital world over the physical one at “alarming rates” and when I say alarming, I mean it’s only alarming to traditional media people who have to adjust to this change.

2) Thinking of starting a business and have little money? Invest in an online one, since the investment is pretty much pennies if not less. I started my websites and business through literally nothing…

3) There are arguments to be made for traditional marketing being superior (in certain situations) because there are still parts of it (TV and newspapers) which do get a large audience.

5) Local businesses may stand to benefit better from also both options, but traditional advertising may serve them better since it will attract the nearest audience, the one most likely to stop at their store/business and buy something.

Now while there are 5 generalizations I made here, here’s specific stuff I want to talk about, specifics being if someone in a specific scenario came to me and asked me for business advice on how to advertise their business idea…

1) If a person is selling guitar lessons, has no money to invest and asks me where the best place to get clients are, I would tell him to put up some local ads on trees and bulletins, especially in places where you’re most likely to find musicians.

I would also advice they start a YouTube channel and start a site for free and do video lessons and link back to their website where they can train people to play a guitar via Skype or other communication methods.

2) If there is a big company that created a new product and is trying to get their brand into the world to make sales, I’d advise them to also have a central site and do advertising on Google and Bing promoting to the most likely audience to buy it.

If they can afford it (and the business circumstances are good enough, meaning there’s a big audience who would love the product), a TV ad would also benefit greatly.

3) If a real estate person comes to me and asks how they can get more clients, I’d tell them to also start a blog with tips on buying/renting houses/apartments since it’s a big niche market and to also post their ads on popular real estate sites.

Also they should post newspaper ads. This works very well as I personally can vouch for this, as I found my current area of residence through it.

4) If a lawyer comes to me who seeks to get more clients, I’d also tell them to start a website and do a Q & A on it answering people’s questions, then go on forums where legal questions are asked and handle that there.

Every scenario has a lot of circumstances that can very quickly the advice I would give, but ultimately, I would narrow down which is better into 2 categories:

1) How much money do you have to spend?

The less, the more likely you should do some of the cheapest traditional options and lean towards internet marketing.

2) How much experience do you have in whatever form of marketing you wish to pursue?

This is very important as there are sharks out there in both platforms waiting to make bank of someone who doesn’t know what to spend their money on. They will easily say they’ll give you easy advertising services for bloated costs. In short, this will lead to wasted money and very often, undesirable results.

The less you know about a particular form of marketing (that costs a lot of money), the more careful you need to be and not jump on the first option out there, explore by asking different people, online forums their thoughts on how much you should be spending on what you’re seeking to invest in.

Ideally though, you should be your own marketer, in order to save money…

I believe that ultimately, the internet will overtake just about every form of current offline media we have today. They are already dying, and new generations are less and less likely to look at the old media options.

With this seemingly none stop growth of the internet, it will (if it hasn’t already) overtake traditional media and advertising and before long, it will be the only way to grow a business. The only surviving forms of advertising will be the most local ones you can imagine.

But anyway, this will require that people learn about the internet more and more if they wish to create successful businesses or advertise themselves in anyway.

I’ll even tell you something else…

Everything MAJOR I learned about traditional marketing has actually been through the experience I gained through my own trials and tribulations doing internet marketing, and not necessarily the lessons I took from college (which was that the info was overrated).

There is just continually far more opportunity in the online world (and one that continues to grow) than off and if you’re stuck between which field to learn about and pursue, take my advice:

It’ll cost you way less and you will learn far, FAR more.