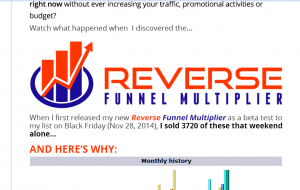 I did buy Reverse Funnel Multiplier, and in this review would like to show you the insiders area of it as well as 2 major problems I find with the program.

Overall Rating: 3 out of 10 stars. I don’t really see the big benefit of what they’re proposing. I also don’t think this is a beginner friendly program, especially since it’s a branch of list building.

Reverse Funnel Multiplier in a nutshell:

I just purchased the program and it’s actually a very short system to understand. You basically have normal squeeze pages with the purpose to build an email list, but once people opt-in, you send them to other offers right away where they can also opt in to.

The idea of using this system is to try and get people signed up with as many offers as possible and gain commissions from multiple sources. 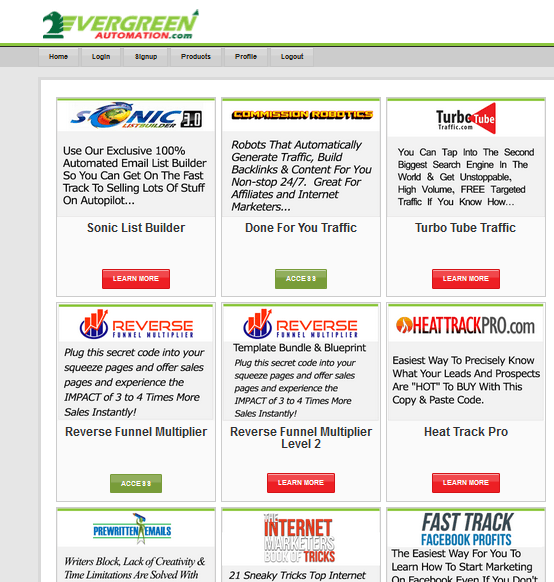 Not that I’m endorsing it, but once I purchased this program, my initial reaction (after the up-sell) was confusion.

I wasn’t taken directly to the members area. I was taken into some sort of HQ page where multiple products were listed. I only had access to 2 of them, the RFM and a previous program I once purchased called Commission Robotics:

You can also see the name on the top left hand side says Evergreen Automation.

I’m guessing that this is one organization with which RFM is associated with and those who buy anything from the main company are likely being sold the same items within this picture.

I had reviewed a program Evergreen Recurring Income System in the past and I’m certain it’s part of this main program in one way or another. But I never rated it high so seeing that name again didn’t do much good either.

As you can see in the picture, a lot of the products have a “learn more” button. These are programs that are out of reach unless I opted in or purchased them directly.

Personally I was a little confused and taken back by all the options I had. It’s as though I was being lead to get something I wanted (the opt-in page), then after I signed up, I did get what I wanted, but with all the other offers on the page, I felt like I was being over sold and it actually turned me away from doing it. This will be a major part of one of my oppositions to RFM.

I did get access to the actual training system of Reverse Funnel Multiplier and here’s how it looks: 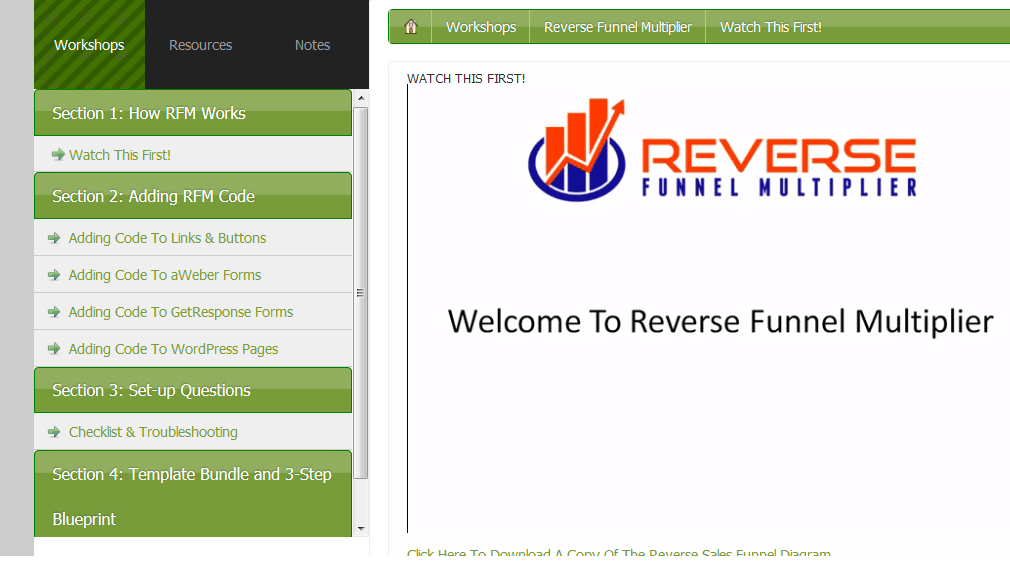 There are 4 sections, but really the one which explains everything is the first section of the program.

The rest will help you set up the formula on your own site. There are directions on adding these things to autoresponders, WordPress sites as well as where to put links.

And now that you’ve seen what the inside of Reverse Funnel Multiplier looks like and how it works, let’s get into the main point of this review, which is to point out the 2 arguments I have against buying the whole thing (and what’s actually better to do).

The 2 arguments I have against Reverse Funnel Multiplier:

1) I have done a lot of email marketing, and I believe there is spam taught in this program:

Email marketing is not something I focus on too much anymore, BUT the first impression I got when I entered the main HQ page and then started looking through the way it works was that it looks like a spam.

This is a personal impression and you may feel differently, but when I buy something or opt-in, I don’t like to be sold to anything or given basically a list of other products to sign up for. As I see it, I signed up, give me what you promised, earn my trust and then we’ll discuss opting into other programs, let alone buying.

Doing this sort of thing eliminates the trust value in my opinion. Yes I do still get value for my opt-in, but the fact that there’s other offers to look into not only confuses me but makes it seem like I’m being oversold.

2) I feel there’s dilution going on:

Let’s say that a person who signed up on a squeeze page which uses the RFM formula sees all these other offers after they have done so and do in fact decide to sign up to a few.

They are going to be reviewing emails from all of these sources and will be pitched one product after another. In my opinion, this will distract them from the original squeeze page they were looking at and in the end actually negate the ability to make the marketer sales.

I also feel that as an add on to this con, the dilution of attention and having so many emails coming in will also make the person feel that original argument I made and that is they may feel as though they are being spammed. This is how I would feel and again, it may not be so for everyone.

3 out of 10 stars. I feel this method will reverse (no pun intended) the odds of leads turning into long term customers.

My formula for list building is very classic. I give people value and a good reason to sign up (why list building is overrated). Usually high value information that answers their questions and gives them solutions to their problems is what works best, but at no point in time during the beginning stages do I try to sell them anything.

I believe value and trust must be earned first. I have to be an authority in their eyes and the work that needs to be put to make that happen isn’t something that I see within RFM. I feel that it actually does the opposite.

You can totally give people GREAT value in addition to the formula, but I just feel that them signing up to other places is going to take away from them being focused only on you, which can have a negative impact.

I want to funnel my leads where I want them to go. I don’t want to spam them with product offers after product offers or have them sign up to tons of other newsletters and keep getting so much information that they are going to be lost. It needs to be precise and it needs to be in proper amounts.

I will probably get less opt-ins this way than with the RFM formula, but I feel my leads will be more likely to buy and listen to my advice in the long term than they will through the RFM method. And although I haven’t tried their approach, I know mine works from years of experience and it’s been taught to me by Wealthy Affiliate, which is the better learning program on this material. 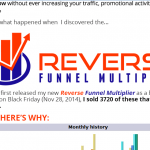 I do not believe this program is worth it. For my top recommendation, click here.
Click here to test drive Wealthy Affiliate risk free and get your bonuses (no CC required)