Highly not recommended program because the info is extremely vague and costs money to try (in addition to the $47 you spend). Plus this program was once known by another name, which I will explain and they basically just copied over the program, but named it differently.

Do I recommend it? No, absolutely not.

A little over a year ago, I had purchased a “get rich quick” type program called Auto Home Profits. When I reviewed it, I found that it was not a good way to make money online (I’ll explain why shortly).

But what happened was when I discovered MHBM, visited the site, clicked through to buy it, I discovered the check out cart was that of the previous program I had already reviewed! Here is proof:

In other words, MHBM is just a recycled version of Auto Home Profits and if you buy it, you will get access to that program and since I purchased it, reviewed it and saw what’s inside, I determined that it was not good.

So what else is there to say? Well there’s even more red flags (5):

If you need more evidence that MHBM is not the type of opportunity you’re seeking, I have several pieces of info that you need to know (as well as an alternative on what you can rely on):

Sites like MHBM are commonly “gateway” websites into one or more programs, typically bad ones. In this particular instance, it leads into the other program I already mentioned reviewing.

Do not be surprised if in the future the same MHBM site leads into another work at home program (also a scam one). These same gateway sites often change their linking/promotional methods depending on how many sales they make.

For example, if I do a Google search for Auto Home Profits, I will not find the official site anymore (at least not on the first few pages of results), but I did find a blog site promoting it, which didn’t actually lead into it, but another program I also reviewed called 700 Profit Club, and yes, it was deemed to also be very bad.

One can even say that MHBM is not even a real site, it’s just a fake promotion since the checkout cart and actual program you get has a totally different name.

And speaking of fake, Jessica Langford is likely not real, and neither is her picture that you see on the MHBM website:

And I say that because that is a common picture I see used again and again for numerous fake websites like MHBM, with different program names and that same picture is often associated with different names.

And by the way, Auto Home Profits is said to be made by a “Shelly Davis”, another fake persona.

As I said before, it’s very hard to find the original “Auto Home Profits” website if you look it up on Google. That’s because (through the experiences I’ve had), it is common to see these bad programs run for a little bit, then go dark, and it is even more common for programs like MHBM to spout out and suddenly promote them.

There are very few, real programs that teach you to make money online that actually stick around long…

Ah yes, I did promise to tell you what was inside the program. Here you go:

So looking back at my review of Auto Home Profits, which as you already know is MHBM, the simple idea was this:

With the second approach, the goal of email list building is selling to your list. The idea is, if you can gather a list quickly (here’s actually a good way), you can make money faster. However, this is a common falsehood in the internet marketing world and one which is preached too often by bad programs…

Anyway, that is basically in a nutshell what that program was and the reason it rated a 1 out of 10 stars was really because they would try to get you to buy expensive coaching (which I am against) and because the idea of making an email list through buying leads is often expensive, not profitable and very much NOT newbie friendly (here’s some reasons why this is).

It is a practice that works, but not in the vague understanding this program would have you believe. Yet my belief was that the training on doing this was very vague because their main objective was to get you to call a coach and buy the expensive packages, because that’s where the real money would be made by the program.

Now MHBM is carrying the torch, so to speak, in continuing this approach of making money, and FOR the program, not necessarily for the person buying it, at least not in the way they are operating now, teaching what they’re teaching…

1 out of 10 stars. Since this is nothing but a link to another program and that one got 1 stars out of 10, this is fairly the same rating this “fake” site will get too.

My final thoughts: Where to get good, practical training on making money online.

One of the many things I enjoy doing in reviewing these bad programs is that I get to tell people interested in them where to go instead to find a real opportunity. I think I’ve already made the case as to why the program I was reviewing isn’t good, but inevitably, I will be asked about an alternative, that works, and that is the right question.

And I have the answer, so I won’t leave you wondering anymore:

Now that program works according to the work you put in. I absolutely do not promote or preach get rich quick schemes or get rich quick mentality. Those 2 things are the reasons scams like MHBM still thrive these days, even though all the red flags are there out in the open.

But the program I recommend is without a doubt the best there is to teaching you online business. And I say that because I am product of that training and it’s done wonders for me, as the link above will show you. And unlike MHBM, I will explain what you’re going to learn and how it works. 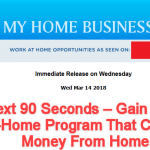 I do not recommend My Home Business Mentor and instead (well always) recommend this program that helped me work from home full time.
Click here to test drive Wealthy Affiliate risk free and get your bonuses (no CC required)

2 thoughts on “My Home Business Mentor a Scam? I Purchased it.”