Financial Freedom Formula totally took me by surprise in that in that it marketed itself in a way I though would turn out a scam.

But after I bought and learned about the system, my opinion changed significantly though not enough to fully recommend it (I’ll show you what I do recommend).

This review will explain all of this so you can decide for yourself.

These are the issues which made me lower the final rating of this program. It is not a scam, but trying to put in time, and effort into making money off mostly theories in my opinion is not smart.

For example: If you’re good at building websites, you can use this system to find businesses who need websites built or improve existing ones, offer your services to them and get paid for that. It’s like a freelance gig.

They also show you how to attract the clients by giving you bullet points on what to say in your “interview” so you can get hired for the job.

Eventually, the idea expands where if you can get enough gigs or jobs, you can outsource some of them to other freelancers and be able to take on more projects while making more money.

One thing I also want to mention is that you can consider this type of program great for those who want offer online consulting services and target those businesses and offer them help through the stuff taught in this program.

And another thing I want to mention is that the Wealthy Affiliate program also teaches this type of blueprint that Financial Freedom Formula teaches, but because it has more success stories and realistic blueprints, I trust it more.

So I have to “apologize” to this program’s creator:

Prior to buying the Financial Freedom Formula, I was originally notified of it by someone I know who sent me a link to it and I told them it looks like another bad program and to stick to Wealthy Affiliate where they will be happy.

I still stick to the latter advice on Wealthy Affiliate, but I was wrong about the “bad program” part in regards to this program. It’s actually got a solid business idea on making some good income.

What I do not apologize for and have issues on regarding Financial Freedom Formula: 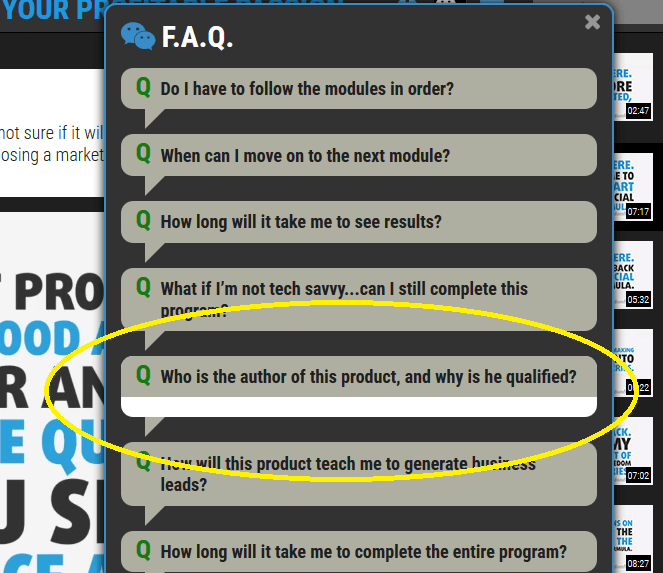 de this system other than his name being James and him making over a million dollars online nor did I get any proof of that being real or it being as a result of the business idea they were going to teach me.

This is just not the right way to gain trust in people.

For example, I also quote myself as making a million in sales, but I actually provide proof, the income stats and more, so you know it’s all real (I actually made $1 million in affliate marketing and here is proof).

You see my face, you know my real name and if I saw this with Financial Freedom Formula and it checked out, I’d give this program a higher rating.

Now I don’t doubt that James’s idea can work, but it helps to have case studies (and by the way, I have my own case studies of success) a person who shows themselves to back up their business ideas and more, but I didn’t see this in this program.

In fact, in the Q & A section of the members area, there is actually a question on credentials and it is blank (above):

And about the program which I’ll get into is only 5 steps. 5 very, very vague steps which I know can work, but they leave out a lot of issues people can run into when they try them. It’s like I received a treasure map and it has 5 steps, but along the way it leaves out little and big problems I can hit if I’m not careful.

Had this program included common problems you can hit along the way of completing the 5 steps and how to deal with them, this program would have been totally legitimate but right now it’s just a good idea in my opinion.

So let’s discuss the 5 steps that make up Financial Freedom Formula:

If you already read the summary of it above and got it, then you can skip this section, but if you want more details of what’s in the members area of this program, this is where you’ll find it:

First there is a summary video which basically discusses what I said in the nutshell section of this review. Followed by that is 5 “webinar” videos which I wouldn’t even call that because they are so short and I personally know webinars to be at least an hour long, although they often fail to be good.

But anyway, once you get past the summary, then the lessons begin. Each has a video (5) and there are 2 tasks within every video. These tasks basically summarize the lesson and give you a plan of action to take.

Sometimes 1 task can end up being multiple steps. But here the lessons are referred to as webinars so we’ll label them as that:

This short video discusses finding what you are good at. In task 1 of this section, there are 3 questions that help you identify this. Basically it’s a way to narrow down your passion, or as people in my industry call it, a niche.

Then in task 2, you are given 3 sites: Elance.com, Freelancer.com and Upwork.com where you will eventually visit to find businesses looking to hire you for those skills. I also compiled my own list of make money online sites for this freelance type work.

Usually those sites mainly have writing work to be done and it can be hard to find a person or business that will hire you, but the next few webinars to explain ways to improve your chances.

It gets deeper into understanding your skills and knowing the people who are looking for those skills for their business. Again there are links to those same 3 freelance websites.

Now one other problem I had is that in every single webinar video, there are no images or videos showing where to go on those sites. It’s basically a person talking and you seeing the words on the screen which kind of makes it necessary for you to figure it out when you visit those other pages and again a missing piece to what could be a much better explained formula!

Here you write an online “resume” on those sites where you immediately let relevant people hiring know about your skills quickly to make it easier for them to spot you. Other than that, one of the tasks is doing verification steps on those 3 sites.

On this step, you get into the part about closing the “contract” once you’re contacted and what to ask and what information to give. This is where they give you the bullet points on what to ask and really I didn’t think there was much of a secret here other than to let the person hiring you know that you know what you’re saying and doing which is just about what every job interview and boss wants to know.

In this section what is discussed is “automating” the process of getting hired for more jobs using the same kind of formula and I honestly had to fill in some blanks here myself. Basically if you get hired for too many jobs, and if you can’t handle them all, you can outsource it by going to one or more of those same websites where you originally went to get hired and get freelancers of your own and pay them a portion what you would be paid except you’re the boss here.

It certainly sounds very good, but it’s not easy to find a trustworthy or good quality writer or other expert in an occupation you would require so it would take time to build this up, but they do say you should aim to get only a few people which they are right about. In any case, it would allow you to get more projects done and make more money.

4 out of 10 stars. A good formula which could have been great if they just included the important things I mentioned.

There is a lot of opportunity to really build an online business through the blueprint described in this “program” but in reality, this is in my opinion nothing more than a good, but general informational product. I do admit that until I looked through the 5 webinars, I personally never came up with an idea like this so it’s definitely an interesting thing to me.

But as I said earlier, I told that person who asked me about it stay with Wealthy Affiliate. It has similar initial and long term goals as this program in that you find a niche and eventually build a big business, but the steps are different.

Mainly with WA, you build your own website and then basically bring in your own customers instead of looking for work outside.

And all those missing pieces the Financial Freedom Formula had in my opinion, Wealthy Affiliate does not.

In addition, it’s also free in one of it’s options (with tons of lessons) whereas the other program is $47 right upfront and really all you get is those 5 webinars, that’s it.

So you can definitely try either program as their ideas are different but both can lead to success, except with WA, I think it’s much more likely because there are less missing pieces and WAY more help. 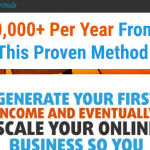 Despite this program having numerous pros, the Wealthy Affiliate program has a plethora of more pros and realistic ways of working. Click here to learn more.