Knowing what I know about traffic generation and getting clicks to my site, I want to explain in this review why a place like Clicks Dealer makes me nervous (in using it that is).

Price: It depends on which advertising platform you select and how much you wish to spend (so it varies).

At least for now. I’ve studied this program as much as I could from it’s main site, a recent scam program I reviewed that was promoting it and by also sending them an email asking them some questions on how they operate, but there’s aspects of this site that I just don’t trust for good reason/s…

Recommended program? No, there’s just not enough trust or evidence it’s as good as it says. And I will explain that. Also: 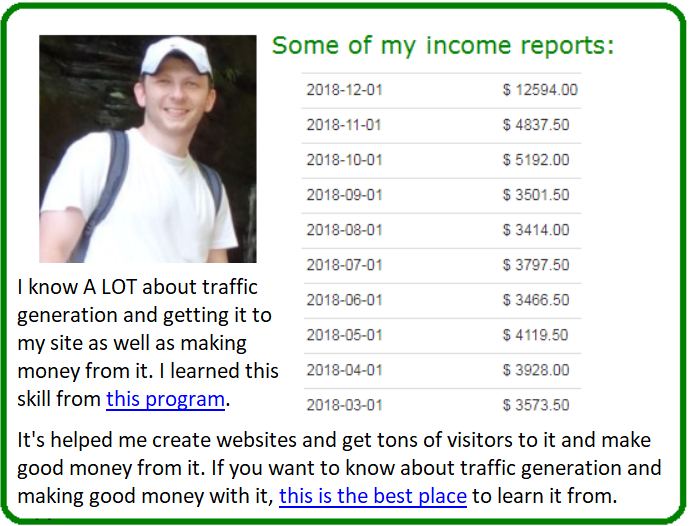 What is Clicks Dealer?

So from what I gathered, it’s a site in which you can buy targeted traffic to your site (since I know a lot about traffic, here’s the best kind, known as laser targeted and how to get it).

Now before I go further, I want to mention that I encountered this program after reviewing a bad program yesterday  called Daily Banner Profits which was an affiliate of Clicks Dealer. Checking out Daily Banner Profits, I decided to give them a low score for a plethora of good reasons, but because it was connected to this program, I decided to review it independently afterwards.

So as I said Clicks Dealer is a place to buy targeted traffic from, but I’m not entirely certain on this conclusion and the reason why is because the site itself is very mysterious on how it operates and I came to my conclusion after looking at their sign up form.

On that sign up form were clues which led me to believe that this program is designed to have you buy traffic from it. Here’s a list of the types of traffic you can choose:

Upon selecting that as well a niche topic, a URL for sample reasons, filling out a long form and billing, you will supposedly from my understanding get access to driving whatever traffic you selected to your site/business so you can improve it’s growth.

Could this company just be another type of solo ad provider? Possibly, as buying traffic from third party people/companies is a common practice in the online world, particularly the paid one…

Some positives I saw on Clicks Dealer:

1) The site itself does have a physical location and an official number to call.

2) Their questionnaire in signing up is actually pretty good in most areas. I personally know a lot about paid traffic methods and how to drive good, targeted visitors to a site and seeing things like niche selection and selecting which type of traffic you want is indication that the company looks at the truly important details. How they deliver on that is another question…

3) There was a live chat, but my experience with it was pretty bad (I’ll explain in a moment).

Then there’s the many negatives I saw:

1) The first standout issue for me was how vague the site is in general.

I looked through most of it, read the about us page, among many others trying to figure out how exactly Clicks Dealer operates. I was also looking for testimonials or some sort of screenshots of case studies to show how they help advertisers get traffic that converts. I did not see anything in regards to this. The explanation of how the company operates (as written on it’s own page) is extremely ambiguous and hard to figure out. The explanation I gave you is how I interpret this place from my own knowledge in this field mixed in with the questionnaire they have.

I do paid advertising and if someone were to ask me how I work, my explanation would be simple: You tell me your site name, it’s topic and I’ll send you the relevant audience interested in your site’s content for an X amount of money. I’d also provide examples of this to show my results and credibility.

This explanation is simple, to the point and yet I couldn’t even get that out of Clicks Dealer. For a company that supposedly boasts on how they make businesses grow through their help, they sure don’t explain it well in my opinion. I just see a lot of fancy words, but no substance to them…

2) Next I didn’t see pictures of the staff, creators or other IMPORTANT things to have with a supposedly legitimate company.

3) Now for the chat experience. It was pretty low quality.

Inside the back office where you buy ads, I contacted the live chat representative to ask them simply how the company works. With each question I was asking and response I was giving, there was a major delay in the response of the other person, I’m talking a minute at least before I would get a response to simple questions, this made the chat drawn out and too long to be patient with but in the end, I got a simple answer for a simple question I asked about how the company works: 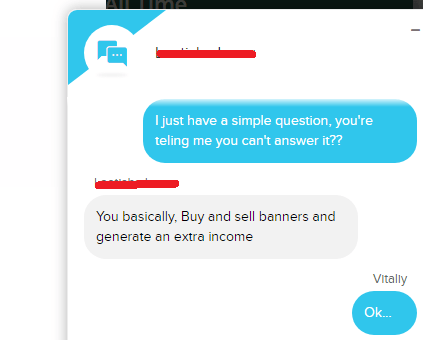 Now I know how important support is and under par support is no good in my opinion. There’s networks out there which do paid advertising (I’ll mention them below) which respond to you more quickly and help you move forward a lot faster without having you go through this sort of lag or red tape in the process…

Personally, I just want to give you guys a side note that if you’re new to paid advertising, you should NOT get involved with paid advertising network until you have more knowledge on the subject, otherwise you risk losing a lot of money. With that said…

-There aren’t many third party sites talking about this organization. Do a Google search on it, you’ll find the official site and some third party sites reviewing it and calling it a scam. I’m not going to jump that far into that claim, not yet, but so far, I’m not convinced I should be using this program…

2 out of 10 stars. So overall, without detailed instructions, ambiguous explanations, no proof of the company doing well for clients and a few other things, I am not convinced that I should spend any money on this program. If anyone who has had REAL experience with Clicks Dealer can add to this and fill in the holes, please do.

My final thoughts: Here’s what I would do instead of using Clicks Dealer.

While I am totally open to changing up my current review of this program, I won’t until I get more concrete info to work on. I have seen too many companies that work like this one under deliver on their promises. If you’re going to try and pay a company to handle advertising for you and help your online business grow, you better well give them a good reason to spend money on you.

You gotta give them specific, easy to understand tutorials, examples of how you operate and more credible things.

As of now, I will not work with this company. If you are of the same opinion, I would recommend the following programs:

I’ve used them in the past and still do for success for my online campaigns. I also teach people how to use these programs through tutorials like this on PPC.

For example, with Bing Ads, I’ve gotten 100,000+ clicks to one of my sites over a 2 year period for just under $8,000 in ad spending and made well over a $100,000 in the process in revenue. I have a secondary site which talks about my Bing Ads strategy called HelpingHandAffiliate.com. Check that out.

I’ve always advised that people seeking to do paid online advertising learn to do it themselves and not outsource it to other companies because you’ll usually end up paying way more and your results may not always be good.

Now quickly returning back to the topic of Clicks Dealer, the catch 22 I find myself in currently is that I can’t call this site a scam. But I cannot even recommend it either due to the issues I pointed out. So for me, having had success with the networks such as the ones above, I’ll just keep sticking to them and recommending them to people.

Other than that, I will say that if you are NOT a big company, but own a site and need to drive traffic to it, and you’ve not had success in that regard, then you need training on traffic generation and the best training for that is in this program:

That being said, I’d love to update my review of Clicks Dealer because there’s always a part of me which wants to give these types of companies a better score, so as I mentioned earlier, if you’ve dealt with them or can help me define it better, please do so below.

Varies on which traffic package you buy. 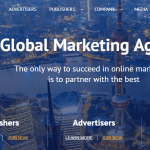 I do not trust this program to get me targeted traffic. My success at this method was taught to me by this program and it can teach you the same things.
Click here to test drive Wealthy Affiliate risk free and get your bonuses (no CC required)

4 thoughts on “Is Clicks Dealer a Scam? Why I am Reluctant to Use it.”