Ever heard of Bum Marketing? It was an old school method of generating traffic to your website and it was actually one of the first breakthrough moments in my experience in this business where I’d finally started making money online.

I made quite a bit thanks to this strategy ($1,000’s), but in this article, I will be explaining why the Bum Marketing Method is really not a useful approach to succeeding online anymore (and what is better instead). 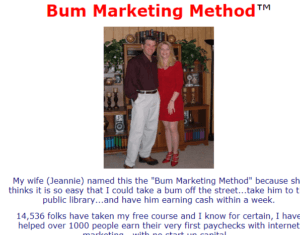 How does it work? I’ll be explaining that in detail, but it basically involved writing articles on article directories and promoting products through it.

Does it still work? The sad answer is no, and while I did succeed with it back when it was a fresh, new way of making money online, it petered out due at least 5-10 years ago because of major Google updates (it’ll all be explained shortly).

I love Travis Sago and I attest to his Bum Marketing Method helping me succeed online when I first started, but the reality is that I can no longer recommend it due to it really not working anymore.

Here is what I do recommend instead of the Bum Marketing Method: 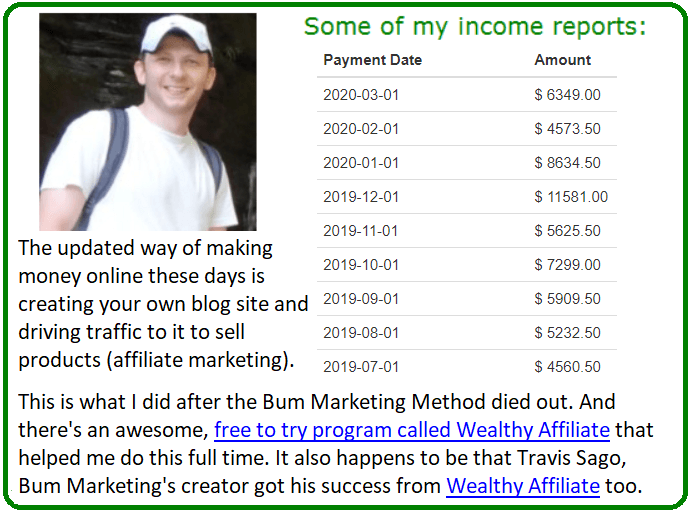 Let me explain what the Bum Marketing Method is in detail:

This is basically another word for “article marketing”, in which Travis Sago, the creator of the method taught you to go around various article directories and write articles on them targeting specific, long tailed keywords.

Article directories used to have massive authority with search engines and pretty much anything you wrote on them, would get you a lot of traffic to those articles. Making money from this was actually pretty easy as you could just pitch your own products or affiliate promotions on these articles. And as long as you repeated this process, you could make a lot of money, which I did.

In fact, I had gotten involved with using the Bum Marketing Method sometime in 2005-2006 and this was after my first major failure in trying to make money online, where I attempted to write an eBook on health and it failed miserably in the sales department. A knowledgeable individual in the industry then suggested I pick up the pieces and move into Travis’ method which was very popular back then.

Once I did, signed up for the course and tried it, it wasn’t long until I had good articles written up and getting great traffic. I even got to a point where I was linking my articles to an opt in page, collecting up to 200 subscribers daily and in many cases, earning $100-$200 promoting weight loss products.

In fact, Mr. Sago himself helped me out a bit with a few ways to title my articles and which keywords to look into, which in many cases ended up being good profits for me (and he never asked for a penny) and to this day, I still owe a lot of thanks to the guy for helping me push forward in this industry and I have to personally say this to the guy:

You’re the man! And I will happily link to your site in this article. In fact, here are links to 3 places you can reach Travis at and even get his products:

1) First is his Bum Marketing site.

2) Second is his Mojo business site, which I will talk about in a bit.

I have no issue with losing traffic (traffic leakage) by doing this. Travis is an awesome, ethical dude who deserves this praise and more. Again Travis, you helped me out a lot and I hope the traffic that comes to this page visits and does business with you.

I am also not going to lie in that I am reviewing Travis’s program to recommend another one, which actually happens to be the one we both got success from online (but I’ll talk about it later).

Also quick note, I wrote an article on online marketing gurus and neglected to mention Travis there, and he absolutely deserves to be noted there, so I will add his name to a list of people who can be trusted.

Ok, the Bum Marketing Method sounds awesome. So what happened to it?

In short: Google updates and an evolution in how it ranked websites, article directories and personal blogs. They started killing the rankings of articles that were up on these article directories, so people like myself who relied on them to get traffic and make money online, couldn’t anymore.

In short, this process killed off the Bum Marketing Method (article marketing).

And if you would like more details, here they are:

For anyone who is familiar with article marketing and writing for article directories, you’ll know that this approach to SEO died off many years back when the same directories were slapped by search engines.

But if you’re wondering why this action actually happened, I’ll tell you:

Too many people overproduced too much low quality content on article directories and this problem, causing the slap/evolution to occur and basically made Bum Marketing worthless to do.

While I had hoped that he would update Travis’s site on his method (and perhaps an evolution to it), I know that he has moved onto bigger projects. His current one at the time of this writing is a project called Big Mojo which is a course on list building and profiting that way.

Admittedly, I had not gone over this course, and I just may in the future, but I will link to it above because I still have a lot of respect and gratitude to Mr. Sago for helping me out long ago. He is 100% legit and ethical.

So what do you do if Bum Marketing isn’t the go to option anymore?

The great news is that you have a number of choices and I have to say in hindsight, while Bum Marketing did make me a lot of money, I had to evolve once the method died out and again, I have to thank Mr. Sago for this because he got me into an awesome program that I still am a part of today, Wealthy Affiliate: 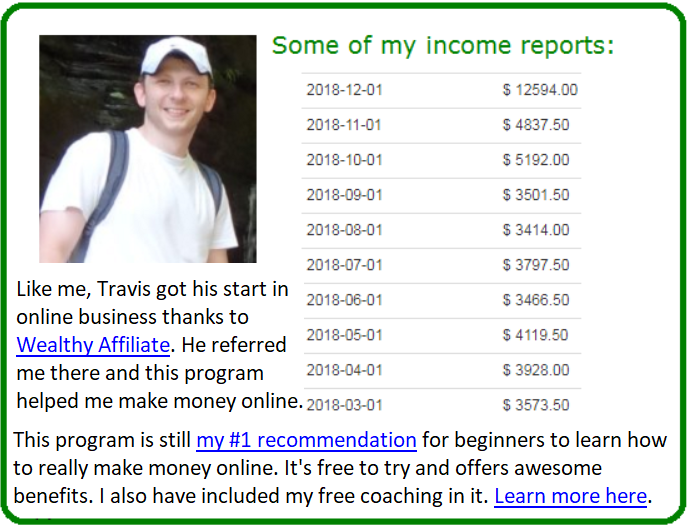 At the time, Travis was also part of that program, and one of the biggest success stories there (it’s no surprise since the guy is very smart and entrepreneurial). It was actually there where we communicated for a bit and he gave me great advice, but ultimately, when he moved forward, I stayed and 11 years later, I am still there, but making a full time income, thanks to their training.

So my first advice would be to join Wealthy Affiliate as an alternative, since it’s free to try and basically continues to teach what is essentially the art of Bum Marketing, but an evolved version that still works. You are no longer writing on article directories, but writing on your own, personal blog site/s and this is the method that works today and is going to be the future. I am evidence of this and I have income stats here, that prove that Wealthy Affiliate absolutely works.

My second alternative advice is to try Big Mojo program. While I do believe it can be expensive, Travis says that he only charges people if they succeed and while I don’t know how much that is, I do know that his reputation is legit so it’s another option, that despite me not personally trying, I am still recommending because I’ve known Travis enough to know that he is legit.

I’m not even affiliated with Big Mojo, I just like the guy so much that I have no problem linking to it. Try it out if you want (link is above).

While the Bum Marketing site is still up and I’m pretty certain that Travis may possibly link the opt ins he collects from that site to his updated projects, I know you can’t go wrong with either of the 2 options above: Wealthy Affiliate and/or Big Mojo.

A lot of Travis Sago’s success online actually came from studying Wealthy Affiliate’s training, so you know that you’re getting solid stuff there and being that he also used that knowledge to create awesome courses and training’s, the most updated one called Big Mojo, you know that both options work.

While I am promoting Wealthy Affiliate, I can tell you that because it’s free to try, that it’s the first option I’d go with if you’re a beginner, since it not only sets a great foundation for becoming successful in making money online, but also helps you become very successful with it, but like I said, you can’t go wrong with Big Mojo, provided of course that you do what Travis says and I can tell you from personal experience, what he says and teaches works. 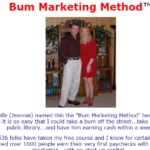 I love Travis and this program, but today it is outdated. However, here is where both Travis and I got our training to make money online from.
Click here to test drive Wealthy Affiliate risk free and get your bonuses (no CC required)

4 thoughts on “Does The Bum Marketing Method Still Work? My Experiences.”