How often has it been the case that you land on a website, browse around and BAM, out comes a pop up, asking you to sign up, promising you extra value if you opt in, and so on? Probably quite often, and this is actually a common trend to see on many pages.

In fact, recently I got on the pop up bandwagon in that I installed an exit intent one up on this very site from a program called Thrive Leads.

While I have a few installed and working on this website, here is the most common one I use, and it’s the one you will see if you try to exit my website: 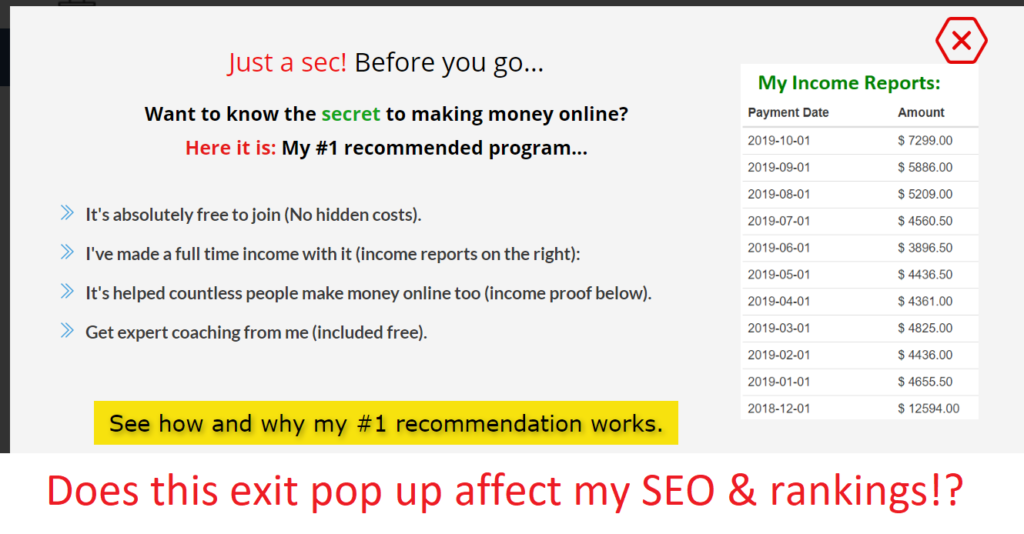 While my experiences were almost immediately positive, and I made more money, just yesterday, when I went to bed, a thought struck me:

Will using this affect my site’s SEO?

I think it’s a valid question and because I’ve done SEO for so long and generally know what Google looks for, I had several pros and cons go through my head. Panic set in since I focused more on the cons though, and then instead of falling asleep, I began browsing around for answers to this question through my mobile device (this is going to be an important piece of this article and the answer to the question).

Do pop ups affect SEO, negatively? The answer is that it can.

But don’t panic. What determines the answer to that is 3 things (as of now):

A) What type of pop up you use (since there are different kinds).

As of now, the exit intent one is considered “safe”, and I quoted that because the SEO game changes very often and its not out of the question that in the future, they may too be considered negative.

Putting the exit intent option aside, it’s a mixed bag for the others, and generally, when it comes to most of them, and if it’s going to negatively affect your SEO depends on…

B) How they are used.

Basically if your visitor is:

So if you’re trying to get people to sign up or opt in some way, and are using these options, I would consider readjusting or removing them.

Think of it this way: Your visitors need to have a good experience when they land on your pages. They should ideally be able to browse and read your content without getting distracted by something that isn’t part of it.

They should be able to enjoy their reading time and look around other pages on your site without being interrupted. If you follow this kind of approach, you’re probably safe from any SEO penalties. But yes, I totally understand that this can defeat the purpose of using this whole thing in the first place, so I’ll address that in a moment, because I totally understand how important it is to have them…

Also, once again, I want to make the follow as clear as possible: As of RIGHT now, all this stuff that I’m talking about doesn’t appear to affect people who use the exit intent option.

C) Are they showing for mobile and/or desktop users?

From what I gathered, if there are any negative affects to SEO from using pop ups, they pertain more to mobile users than desktop ones, meaning all the things I listed in point B would go into affect (the negative effects that is) if you were doing it to mobile users, whereas if desktop users visit your site and get this, it’s OK. And once again, as of this moment in time, exit intents do not apply to this, but I’d still treat it as though it were so…

4 ways to decrease the chances of an SEO penalty when it comes to this topic:

Just a quick word before I mention the 4 things: I’m applying them to ALL forms of pop ups, including exit intent ones. These suggestion can either substantially decrease the chances of a penalty or 100% make them unlikely.

Keep whatever pop ups you’re using active, BUT only for desktop users, while de-activating the ones for mobile users, which is actually something that I did after studying this topic.

Since these penalties as of now only apply to people who use mobile devices, removing this option basically clears you from any penalties on Google’s end, while still using it for desktop users, so you’re protecting yourself on one side and still collecting a list on the other.

Another option, which is considered OK is leaving it on for mobile users BUT having it activate after they have been on your page for an X amount of time. As a general rule, I originally set mine to 30 seconds, meaning that once a mobile user lands on my page and reads the content, after 30 seconds of doing so, they will be shown my exit intent.

But again, after reading everything, I decided to de-activate it for my mobile users just to be safe.

Try to minimize whatever pop ups you’re using in a way that doesn’t interrupt or annoy your users (make it smaller, easier to click out of, ect…).

Now I know that is not very easy to do at all, but this is something web users have to test on their own pages and analyze the stats, meaning they can play around for a day or so with one version of a pop up and see what the sign up rates are, vs their bounce rates and page visits and if it’s a good sign up rate, then there’s a good chance your pop up is not annoying people.

Just don’t use them.

If there’s anyway you can shield your page from Google penalties in regards to this topic, it’s just not doing anything that may trigger it. So to avoid penalties in this regard, just don’t run them on your site. Try to collect an email list and/or get people to opt in through widgets on your page which everyone can see on every page and test the sign up rates for that.

Stick to just using an exit pop up.

Once more, I have to state that from what I found, this particular option is still safe to use. So that’s what I’m currently doing on my site, but I’m still adjusting it in that it isn’t showing for mobile users.

When I look at this topic, I have to analyze it from the visitor’s perspective and then plan my marketing around that. What I mean is this, for instance:

If I find that the average user who visits my page, stays there for over a minute, you can bet that Google records that and it impacts your ranking, quite positively by the way.

Then if I decide to add some sort of new feature to my page which interrupts that person’s browsing experience and cuts down on that stay time from over a minute to say 10 seconds, that’s a HUGE decline and it shows Google that something has happened to negatively affect that user’s experience. As a result, the rankings will have to tank to reflect that.

So if I were doing this and using the pop up ads which are potentially at risk for hurting my site’s SEO, I would try to time them and plan them out in a way in which I know the browser’s experience is MINIMALLY or not affected at all, then go from there. This would minimize the chances of any penalties.

Now I totally understand the value of using all these tools on your pages people. I mean after I started using the one I got from Thrive Leads, my sign up rates went through the roof and I was bringing back a substantial chunk of traffic back to my page.

There is absolutely money to be made in using these things, but just make sure you’re looking at your Google Analytics stats, seeing how long people stay on your page and deciding what type of pop up they’re going to see, while at the same time keeping in mind that you want it to MINIMALLY affect their reading experience.

Here’s an example of what I did to test this:

I installed Thrive Leads at the end of June and have been running it for a little over a month now. What I did was, I went into my Google Analytics account and analyzed the stay time of my visitors from 2 periods:

1) The period in which I did not have an exit intent set up.

2) The period after which I did have the exit intend set up.

This test was put in place to see one very important thing: Did the exit intent cause my visitor’s average stay time to increase, decrease or stay the same? Here are the results:

So basically, there was a 20 second average decrease, but this doesn’t necessarily mean it’s a bad thing. We’re still looking at an average of over 3 minutes stay time on my pages, which is great.

Now that test actually showed the period when I was using an exit intent for both desktop and mobile users, so the next 30 days will show what happened when I de-activated it for mobile users and how it affected stay time, but yeah, in short, there aren’t major changes, which I guess (and hope) is a good thing for my SEO.

I know this is not a definitive answer, but…

unfortunately everyone’s sites are different, and being that Google hasn’t exactly said loud and clear what types of pop ups they like or don’t like, we have to look at this topic from the general point of view of what Google still looks for on good sites and that is good content that has people reading and browsing through, so focus on that first and then adjust your pop ups accordingly (and/or use the exit intent one).

8 thoughts on “Do Pop Ups on a Website Affect It’s SEO? What I Found Out.”