I had a read through of Dan Lok’s FU Money (eBook) and want to give you a review and summary of it. Generally speaking, it’s a good read, but it’s also more of a self help book.

Self help books in my opinion only go so far, where they try to change your mindset on (in this case) wealth and most of the points made by the author are truisms, things which you can’t really argue against. However after getting hyped up, the next normal thing for people to want is to get some sort of action plan going.

In other words, after reading the eBook (or hardcover), you’re likely going to be hyped up and wanting to start a business. The question will be how?

Dan has this “how” covered as the very eBook itself leads you into a sales funnel for his High Ticket Closer program where he teaches people to create an income from making high ticket sales.

Now I’m not discounting that Dan is genuinely trying to help people too, and while reading through parts of FU Money, I could relate to many of the things he was saying about failure mindsets, sharing some personal stories, such as one about his dad and that really made me want to grow my existing business even more.

In other words, some parts of this book did increase my ambition, and I am thankful for that. 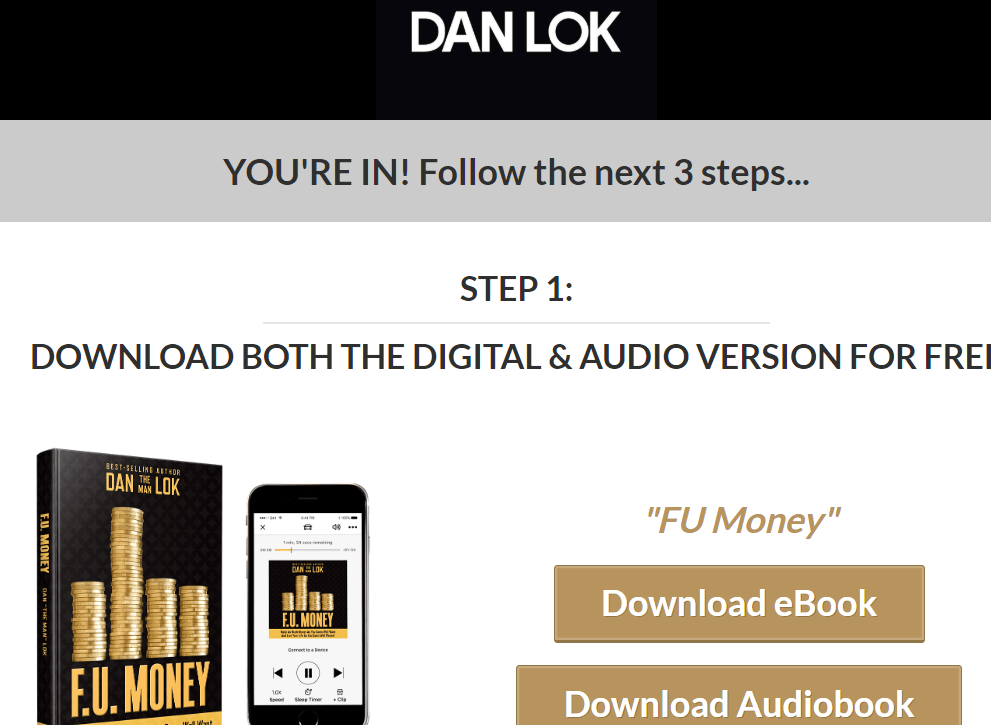 But let’s get to the details of FU Money:

Let me start with a few disclaimers about this book:

1) First, I’m not one of those naysayer critics who finds every little or big fault in anything I try, read or see because I’m secretly upset at my own of success or am a hypocrite in that I have no success of my own but judge others on theirs. I am actually my own success story and started a successful business, online, many years ago (here is my story).

2) While I’m not close to Dan’s level of income (yet), I am pretty happy and thankful.

3) What I do is I review and look at books like FU Money and other sources that teach about the stuff and I instead try to absorb the positive messages from any source I find on whatever topic I like, in this case FU Money and apply it to myself. I did indeed take some notes, tried some exercises inside the eBook and like I said before, it helped boost my ambition.

4) Now I do want to admit that I didn’t read the whole eBook. It’s over 200 pages long and being that I’ve read these types of eBooks before (10 Pillars of Wealth and Silent Sales Machine are both good reads too if you’re interested), the general message and thesis was to try and change your mindset on how to make good money and hype you up, with a mix of great, wise lessons overall.

5) Seeing this type of message over and over kind of got annoying for me and I knew there would be funnel leading to his high ticket program anyway, so I guess that expectation kind of made me impatient in reading the whole thing. Judge me and for this and click away from this review & summary if you want, but I see/read through these eBooks and programs regularly, so I can figure out what they’ll say before I reach the part where they say it.

Here’s a quick background on myself to make that point: 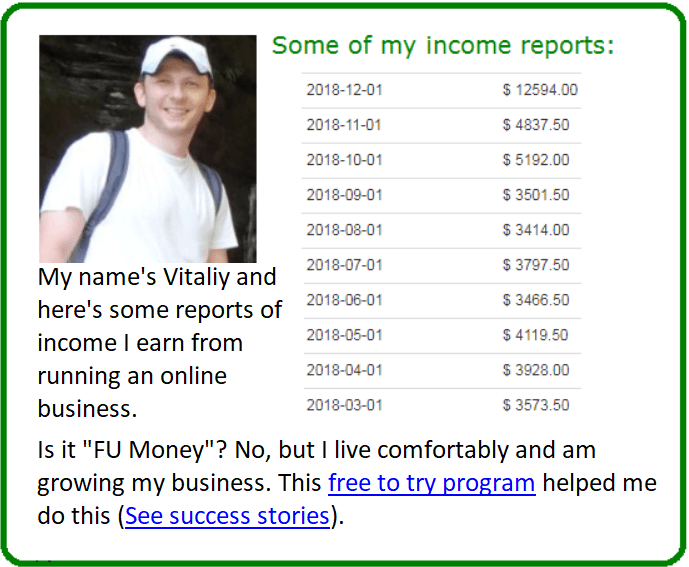 The review and summary of FU Money:

I’ll break down the summary of FU Money into different parts, as it’ll make it easier to understand:

1) One of the first things you read about is how the term and title “FU Money” is basically another way of saying you make so much that you just don’t care or have financial worries.

2) Dan Lok himself is not a PC person (and I love that to be honest). He does swear a lot in this eBook and it’s not really for marketing sake, but more so for just pointing out that he is being real in the points he’s making.

3) The eBook has sections where you’re given a sort of quote by Dan called “Lokisms”, in which the main point of the chapter is being made in a short sentence. There’s actually a bunch of wise Lokisms throughout the eBook.

4) There are fill in exercises in the eBook, one of which I tried which basically help you identify things like how much you wish to make and things like how much you’d need to earn in order to be happy. I actually did one of these excises and listed the things I wanted out of life (that cost something) and estimated I would need to earn $125k a year in order to do it. We’re talking owning a house, apartment, car, vacations, leisure, those sorts of things.

5) Dan shares a personal story of his dad and a stroke he had (he did survive it) and how not being able to see him (due to financial stress) really jolted him to push his ambitions and never have to worry about having a situation like that again.

6) Dan also explains myths about rich people, stereotypes about them, setting the foundation for your own success and making good money from whatever it is you choose to do (his high ticket program does help with this).

7) Overall, these messages, stories and wise tips are what make up the bulk of FU Money and I did generally enjoy reading through it. For me, one time was enough and I have no interest in finishing it fully.

8) I’m pretty sure when it comes to success, the guy is legit and he also teaches people how to make their own success.

A quick note about the controversy surrounding Dan Lok:

I do know there’s a lot of it with him. I’m not one to tell you whether or not it’s true, I’m just giving you a summary of what I read and saw from his book and program. I personally don’t recommend his High Ticket Closer program because it’s a high ticket program in general, not because I think it’s a scam or anything.

Do I recommend Dan’s eBook and coaching?

I’m pretty neutral on the eBook and don’t exactly recommend the coaching for the price, especially since when I took a look at what was being pitched, I concluded you could do the stuff he teaches, for less, through the program I got my start and success from, which was and IS Wealthy Affiliate.

I am ALL for helping and seeing people succeed in life and getting success, and ever since I started on that road and had my own results from it, I’ve also been helping other people do the same. In my opinion, what I advise may be a bit more practical, with less risk and WAY less investment on the wallet for people than going through Dan’s high ticket system: 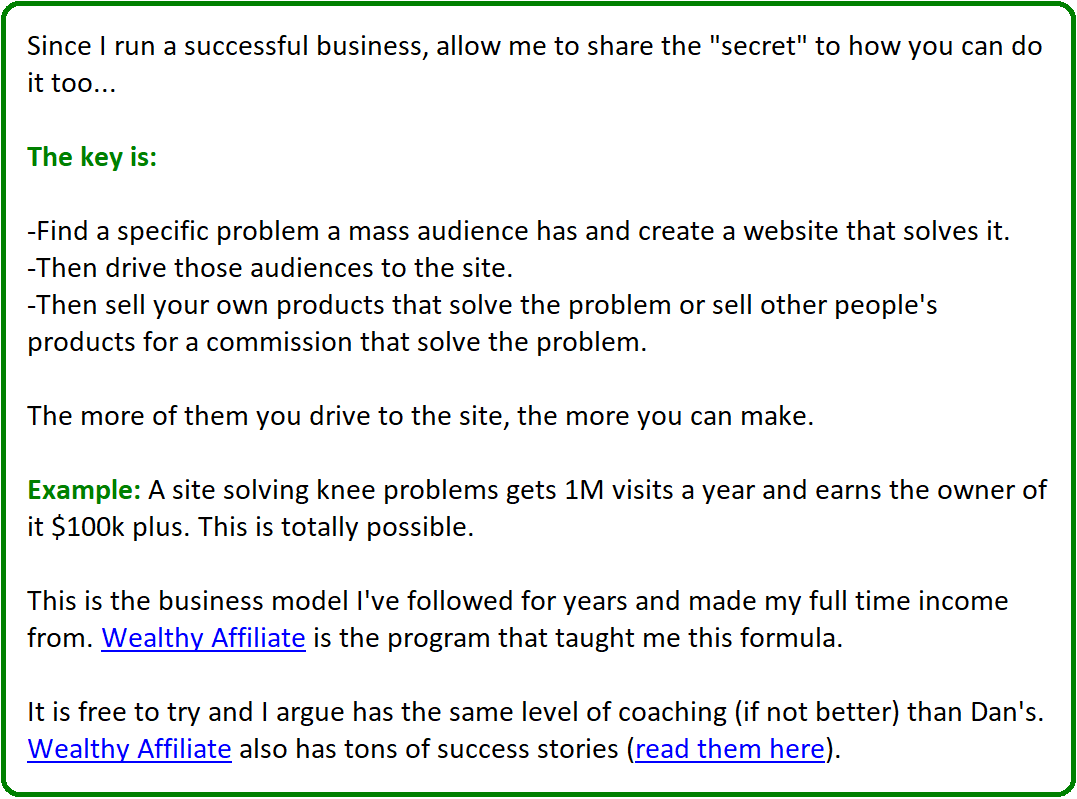 I certainly do NOT regret checking out his eBook and like I said earlier, I did gain more ambition from it, but in my personal case, I was already on that path to my own growth and success, so seeing the kinds of positive messages and life lessons from FU Money reinforced my will to keep pushing my own business further. 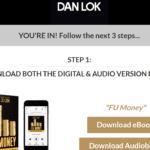 The book was ok to read, but ultimately I am not a big fan of the High Ticket Closer program that is recommended through it. Here is how I made a full time income from home without spending crazy money.

6 thoughts on “Will Dan Lok’s FU Money Make You Rich? A Review And Summary”