A content farm is a website that gets writers to put articles on it. The purpose is to mass produce them to give the site ranking prestige with search engines.

Unfortunately, if you know the history of content farms (and I’ll tell you about it in a moment), you will understand why you should AVOID it/them.

Now as for the definition of one of these places, here’s a good one:

The end result for most content farms is to gather revenue from placing ads on the site. The more people it has writing articles/blogs for them, the more exposure they gain on Google, which leads to high traffic, which leads to clicking ads which in turn brings them money.

For writers, this allows them to also get high traffic to their articles and in turn their sites which can lead to more profitable ways to make money on the internet. Article directory websites are a prime example of this.

However, in recent years a “new” kind of content farm has come into the picture. Companies have sprouted which also get writers to blog and write articles for them, but instead of having ads on the website to generate revenue off, the company sells a product of it’s own. Companies like Empower Network, Pure Leverage & Level One Network are a prime example of this.

Here’s how they operate:

Examples of sites that are known to be content farms:

I used to use different kinds of content farm websites like the ones above to rank my articles high on Google and I made a lot of money from that, but there’s a big reason I stopped using them: They just stopped working.

If you’re considering using these things today: Don’t, believe me on that. Let me explain why:

The side effects of using a content farm site (what will usually happen):

In the past they were a GREAT place to make money online, but in time, too many people started utilizing them for promotional efforts instead of writing quality articles to help people. Thus the quality of writing diminished and Google realized this would adversely affect them.

As a result, Google would make algorithmic changes to their ranking system which would penalize content farm sites. Thus writer’s blogs/articles would lose their rankings quite quickly and never return.

1) Ezinearticles was once hailed as one the BEST places for marketers as they provided free ways to do it. Articles written through them received massive page rank.

However, in time most articles were too promotion and not helpful enough, thus the whole reputation of Ezinearticles suffered and they received the Google slap. Their rankings fell instantly and to this day they are struggling to regain their glory days.

2) Squidoo also experienced this. But they managed to bounce back while also making extremely fanatical changes. Here is an in-depth explanation of how Squidoo is still a great place to earn money but NOT worth it.

3) Empower Network: A scam to begin with (full review), but this is one of those examples of content farms which promote a product. They had prestige with Google, until too many people started over promoting it which led to Google de listing Empower Network blogs and places like Facebook & Youtube banning their promotions.

The 4 core problems with content farm sites (and why you should them):

It is inevitable. A content farm gets high rankings, people will flock to it to take advantage of this opportunity. After all it’s basically a free way to get good traffic to your site! Sooner or later however, this will fall apart. Eventually too many people over promote and this leads to Google slapping down the content farm site. This almost ALWAYS happens. The demand for abuse is too high to curb.

That’s because it bounced back after being slapped by Google since they have made a great effort to kill the demand of promoting on their website which prevents the article written on their website to slip into low quality-ville.

On the flip side however, it got absorbed by Hugpages and that site doesn’t seem to get high rankings on search engines.

3) They are risky business investments.

You can write articles for content farms, rank them high and make money, but eventually they will get Google slapped as will your articles under them. You will lose traffic and even more (explained below).

4) Utilizing content farms is considered to be a form of poor backlinking.

Backlinking used to be a good way to earn high rankings, but now it’s frowned upon by Google. If you have blogs/articles from content farm sites linking to your website and those content get slapped, your website will also potentially suffer in the rankings. Update, there is a new article on backlinks here.

In short, if you want to get massive traffic to your websites and not impede your website’s reputation, do not use any content farm or backlinking methods or for that matter ANY “Fast approach” to getting traffic. Google is getting too smart for this and it will ultimately backfire.

Forget content farms and do this instead if you want to have a traffic generating site:

If you want to build a sustainable, Google slap proof website, you need to create unique, fresh content full websites which help people. You also need to naturally get traffic to this website/s and build authority. It will take longer than going through the content farm method, but in the end you will not be risking your entire website’s business! 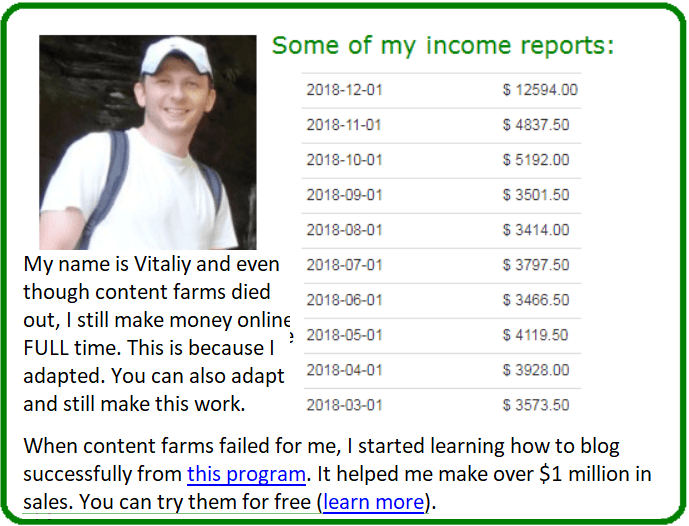 Learn the safest way to create an authority website using the #1 recommended training source I personally use.