I bought CB Passive Income when it was in it’s 2.0 version and this review will cover that. It’s upgraded to 5.0 since, but the quality hasn’t improved much.

I base that off other credible people’s blogs who HAVE reviewed the 5.0 version (and versions before it). I looked it up, and saw that it was very similar to the 2.0 I had gone through. Therefore, I kept the same rating for the 5.0 version as the 2.0, which is not very good.

However, as I said in the title, I will be giving you a better option, a WAY better one actually. So let’s get to this review of CB Passive Income and reveal what’s better than it. 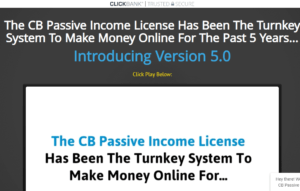 There’s ways this program can work and generate money, but it’s very tough and while this program has upgraded since it started, there’s been very little evolution to this program and the core issues I originally found remain there.

This will all be explained in this review.

CB Passive Income in a nutshell (why it’s not special):

Once again, this is a review of the 2.0 version. But it hasn’t changed much in the 5.0 from what I’ve seen:

It’s still just an email marketing software/training guide that will teach you how to promote the actual CB Passive Income program to people and make commissions when they buy. In order to make things easier, Patric Includes 2 squeeze pages with your purchase which are called “secret pages” (Nothing special about them).

So in short, you’re just going to have a website (squeeze page) and send traffic to it (there is training on that too) and then collect an email list and promote this product as well as others to subscribers.

Squeeze pages are just sites where people sign up to receive some kind of free information. In exchange for this, you can capture their email and then promote different offers to them.

Now this can be risky because promoting something irrelevant or incorrectly (too often) can end up making your subscriber not trust you or just block/send your emails to their spam folder so what Patric has done is basically set up a sales funnel for you where people who subscribe get his emails to buy the program so you don’t have to do it.

I haven’t seen the emails so I can’t say if they are good, but if they are anything like the massive amounts of sales emails I get, I doubt it’s going to go far, but this is really more or a presumption than anything else.

Is the system any good? Meh is what I’d say to that.

It’s not amazing, but it does work. This is what you’ll see:

There’s 2 short ebooks you will read that just give you instructions on how to use this system. Basically it comes down to the following:

That’s really is for the set up process.

The next important thing will be to use your squeeze pages and to start using the traffic generating methods in the training area. Now this is where you will have to read and watch a lot since many different methods are covered. Some of them, like using Squidoo are outdated because that site no longer works and when it did, it was VERY difficult to work with.

If you’re going to put to use any of the training, I would recommend sticking to 1 method instead of experimenting with every single one. Some of them will cost you money like using Solo Ads. And I don’t like that option for traffic generation… 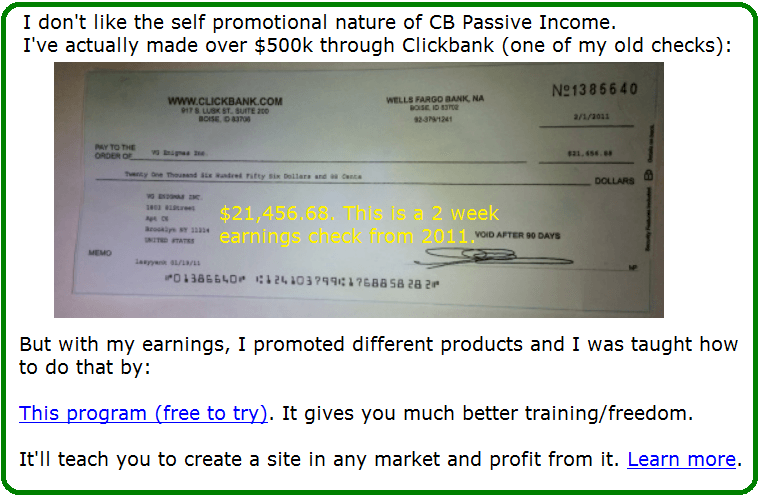 Let’s not forget about the up-sells, since CB Passive Income does have them:

One of the up-sells was $97 and was promoting a “Pro” version of the CB Passive Income. This was basically going to have some sort of team handle my sales and promote different products to people using my affiliate link, at least that’s how I understood it.

The problem however was that when I clicked to see more information on this offer, I was taking to what I later figured out was the second up-sell so I don’t know if the Pro version up-sell still exists or if it just mixed in with the second one, but it doesn’t really matter.

The second up-sell is some sort of program called Fast Cash Series which is $47 that you can try for 14 days before they start charging you monthly. This program will teach you about doing domain flipping and give you future updates on marketing methods.

Did I buy any of that? No, but based on what I saw, I feel the price and what you get is overrated.

2 out of 10 stars. Not a great program, but also not terrible, yet when you compare everything, my conclusion is that it isn’t something I’d buy again or recommend. I’m just glad I tried it for $1.

Programs like CB Passive Income aim to do 2 things:

1) They want to make more money for themselves so they show you how to promote them.

2) They try to make the process easy so they make a simple system you can just copy.

But in this business, the actual likelihood of making money with a simple system isn’t that simple. You need to know that.

In my experience there’s tons of programs that try to simplify making money online, but because there’s so many doing this, you have a lot of programs using the same places and tactics so before long, a lot of people going around promoting the same or different programs in similar fashion looks like spam.

And the bigger problem is that this program doesn’t really get down into the true fundamentals of having a good long lasting online business that actually helps people. All you really do here is learn to promote something, but besides that, what are you actually offering your customers?

A free report? Ok cool, but that’s just 1 thing. In this business, you need to go much further and keep giving people things they will love and for free and this is what we call high quality content. That is the heart of a good online business these days and with this program, I don’t see that.

And that’s going to quickly impact your business in a bad way.

CB Passive Income mainly sells because it gives the impression that it takes a lot of thinking out of the equation of making money online, but honestly, this is bad.

Because lack of understanding your business is going to lead to failure. My bottom line is that I wouldn’t depend on this program for any sort of actual passive income generation. That can truly be attained, but in my opinion, not very likely through this program. 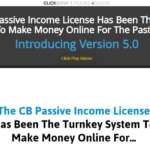 I think for Clickbank and affiliate success in general, there is no better program than Wealthy Affiliate. See my results and why it is the best program here.
Click here to test drive Wealthy Affiliate risk free and get your bonuses (no CC required)