The answer is yes, a domain’s age does affect it’s SEO and it’s rankings, but this is also a multifaceted issue because a domain’s age isn’t the only factor that will determine it’s SEO success. But we’ll focus on just that topic in this article. And here is a little preview of the answer: 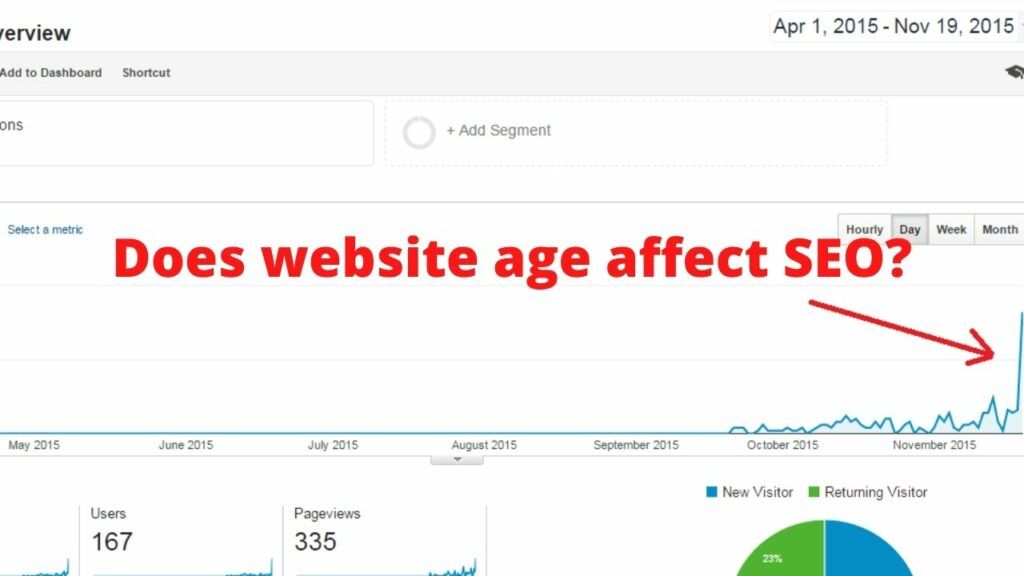 I never took a domain’s age seriously because it didn’t make sense for it to be such a huge ranking factor for SEO and after “testing” this on 2 of my websites, my opinion has slightly changed, but not by that much.

This is a very interesting case study because I never even focused on it. It just came up on it’s own and I think it’s very important to cover since this topic is still so popular.

Here is what you need to know about domain age and it’s affect on SEO:

I’ll be documenting a few sites I’ve tested to determine these points and frankly, most people who do SEO will tell you the same things I do, but let’s get into the case studies:

How this case study about domain age came about:

There’s 2 niche sites in particular that I am going to point to. I had these sites for a long time, put up a little bit of content on them, but just became too lazy to continue working on them. So they just stuck around and at times, the most I would do with them was share them with certain networks and at times, they would get comments.

When I started making these 2 niche sites, I had high hopes for them because I felt they were promising and I still do. Both sites dealt with niche topics that are major problems people encounter.

Both of them have been up for at least 4 months and for the first month, I did post a lot of content (maybe about a dozen articles or so) for each one, but as I said earlier, as time went on, I just got bored with it, too lazy to keep going and the ideas started running out so eventually the content stopped flowing. These results happen to just about everyone who tries to make more than 1 website.

A few key points on these websites:

As you can see based on these Google Analytics stats, the website here is almost 6 months old making it technically be out of the Google sandbox I talked about It started in early May and I recorded the stats for it until today’s date (11/19/15).

I did nothing on this website in terms of PPC, YouTube videos. In fact, I didn’t even socially share it (the other one I did however). I just wrote up a few articles for VERY low competition keywords.

You can see “a lot” of traffic activity happening during the first few months of this website’s creation. Then as we continue going further, the traffic dropped. Why is this? Well because for the first few months, that traffic was NOT organic. It was referral traffic (not social).

But the most important part I want to focus is how much organic traffic this website managed to get in the months it’s been up:

Over the whole period, I only received 86 organic visits! And for the amount of content I wrote up, I guess it’s no surprise.

But even these stats don’t answer the question on domains and age. To really answer it, I had to see when most of those organic visits were coming in.

If the “myth” about having an older domain = better rankings is true, then you think that the more time went on, the more often I’d see organic visits right? Wrong. Here’s the truth:

All I had to do was click on the organic visits to see a chart of when people visited the site. As you can see, there is no increase in visits as time goes on. It’s very much balanced.

HOWEVER, there is a bright side to this which does give some weight to the whole age and domain topic and that is I stopped writing content after about the first month and as you can see, traffic still somewhat continued to flow in.

Does this back up the theory? Not quite.

You can make the argument that visitors kept coming because I was targeting those low competition keywords. So basically, this site’s case doesn’t prove nor disprove the domain age myth.

Ok so this website is even worse technically because I think I had even less content here, but on the bright side it had more comments. We’re still going to be looking at the same factors:

Overall traffic, how much of that traffic is organic and how often that organic traffic appeared. First, the overall traffic:

Despite what the stats show, this website was created in late April 2015. The traffic stats show that visits only started coming in late September with a huge spike in late November. What happened? Well let’s look at who came from where:

54 organic visits out of all 217 or as the stats show, 24.9%. Over half are referral and the other 19.8% are direct. Remember, I did say this site had more comments because I was sharing it more often so this is no surprise, but that sharing also started happening around September and early October. But let’s dig into the organic traffic and see when they came to the page. Was it around the same time I saw a spike?

Looks like the organic traffic picked up very well, around the same time I started getting more comments on the site (late September-November). As as for posting content, most of it was around May and June and then as I said, I forgot about it.

So does this case prove a domain’s age made me get more traffic? No it does not. What it does show is that comments had a huge impact on rankings and this may be why most of that new organic traffic started coming so much later after the site was first created and content was put on it.

Final thoughts: Does the age of the domain really matter?

I believe it does. A website logically, as it grows with age should grow with content, exposure and comments and that all correlates to better rankings and better SEO. But to take 1 part of that equation (the age part) and start trying to buy up old domains with the hopes that it’ll give you better rankings is not smart at all!

I never recommend you buy those kinds of domains and I probably never will. They are a VERY small (but somewhat important) metric to overall good SEO results. The more important part is the rest: Keywords, niche, content, comments, social exposure. That’s what you should be focusing on.

Now that I see what has happened to the site I forgot about, it’s a good reason to revive them and start adding more content. And if you need ideas on what to blog about, read this and it will help you avoid what we call writer’s block.

The organic visits on my second site (and comment flow) show a demand for the niche and where there is demand, there is money to be made to offer a solution.

Finally, I will say this:

Start with fresh domains if you plan to make a niche site. If you already have a niche website (here are 50 awesome niches) you’re focusing on, but it isn’t doing well, the big factor isn’t really the age, but rather the lack of content on it.

Put MUCH more content on it and see how it does. Remember that content takes time to rank, bounce around search engines and establish itself in a high position so the work you put in today will show up in the future. Give it time (months) but never stop posting content.

4 thoughts on “Does a Domain’s Age Really Affect It’s Rankings And SEO?”