Link farms used to be an extremely popular way to generate backlinks to rank sites high. But if you think they’ll still do that today, read this article (because it won’t).

Following up on an article I recently wrote on backlinking, and doing so in a good way, one response to that post was a comment on “link farming”, a topic which I had discovered that I had not written on, yet. Today I will. It is a subject that has not yet gone away and people still make the mistake of trying to utilize it.

I am going to explain exactly what it is and why it’s a horrible idea to try and use it…there’s also an evolution of this method that has been going on for a long time and I will explain how it’s changed, evolved, yet still inevitably leads to a horrible conclusion for ANYONE who tries it… 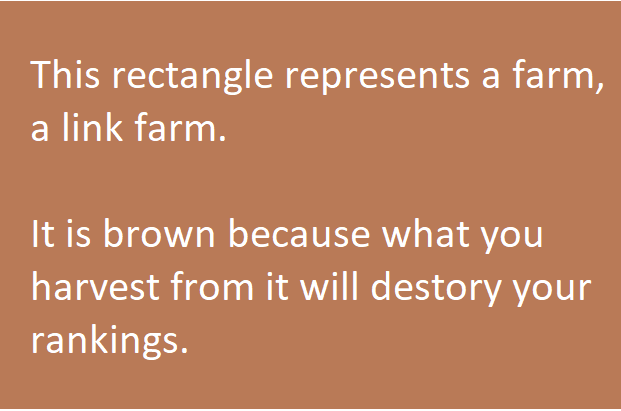 If that metaphor didn’t get the point across, let me explain…

What exactly a link farm is:

Let me use a direct analogy to explain it:

Let’s take an actual farm. that grows food. The more food it grows, the more the person growing it eats and more they grow.

Now when we substitute this analogy with the topic of this article, the links are the food and the site is the person.

The more links (redirects) you can make that point to the site, the more the site will be looked at as an authority website by Google and it will grow in rankings and traffic.

In terms of how this is done, it’s actually quite easy, typically, when these things first came out, there was 1 popular way this was being used:

The person made a bunch of websites/pages/blog posts and just pointed them all back to a single website he/she wanted to grow. When Google visited all those sites the person made and saw that they were all pointing to the one big site, they considered that page to be of high value and thus gave it a higher ranking.

This method was a cheap and “sleazy” way of getting higher rankings.

The incentive for many people who discovered this method wasn’t then to create a high quality website, but to make a cheap sales page, point a bunch of other sites to that sales page and enjoy fast, high rankings, which resulted in mass traffic.

Much to the surprise of…no one…this method quickly became abusive and overused by just about anyone who discovered it (article directories did this).

Naturally overtime, because creating quality content became overshadowed by getting, cheap, high rankings via this method, Google made an update and shut this option down, by basically devaluing the power of those redirects.

In other words, empty sites which do nothing by point to another no longer carried value and very quickly this method died.

One thing you can count on from people seeking easy rankings is that they will not quit looking for ways to exploit Google’s ranking system. If one method fails, they will look for another and after the first method was slapped down, they found another…

This method was a bit more advanced, but still held true to the traditional “link farming” strategy. While in the original method, the main idea was to create empty pages with nothing but redirects to another, once that method was devalued, the next discovery made was if you took those pages that had nothing but redirects, added content to them, and THEN redirected them to a single page, then there would be value to that redirect and the page it was pointing to.

One such arena in which this method of SEO was utilized to it’s fullest and most abusive was article directories.

Places like Ezinearticles.com, Streetarticles.com, Articlebase.com, Squidoo, Hubpages, ect… were all headquarters for people to go to, write masses of articles and just redirect them all back to a single page.

Article directories like the ones I just listed carried a great deal of value in Google’s eyes, because they produced MASSIVE amounts of content from random people all over the world. And one thing to note about Google and SEO is that any page that produces massive content like they did, gets favorable nods from Google.

But anyway, when it’s easy to get rankings, you can bet there’s going to be abuse. So besides writing short, cheap quality articles on those directories, black hat people also used content spinners and created even cheaper, stolen content from others, submitted them to these directories and then just pointed them all back, in masses, to their main site.

Like I said before, this was STILL a form of link farming, but with an add layer of content over it. And wouldn’t you know it, Google stepped in again when this method was abused and shut down the privilege those article directories had.

Once again, the black hat people were forced back into figuring out how else they could get away with cheap, ranking tactics…

As of right now, private blog networks (PBNs) are the most “evolved” form of this whole, sleazy ranking strategy we’re talking about.

What these things (PBNs) do is basically what article directories did, but what happens here is that the person seeking to exploit this strategy has a number of websites and they all carry content on them and also redirect to the page they want to rank higher, but the form in which they do it is carefully coded and blocked in a way that Google will not assume this is a cheap tactic and will still give it good rankings.

There’s entire companies out there which have their own PBNs and actually sell services in which someone who makes a website pays these companies and they’ll just provide redirects from their PBN’s to the client’s site to boost it.

Such a tactic has worked for a number of years, BUT be warned, Google hasn’t exactly been sitting around and not noticing this. They have and in recent years, despite the hidden tactics of PBN’s, many of them HAVE been shut down and devalued. There’s not that many people who still get away with this stuff, but those who do, are basically playing a game that they are soon going to lose.

My final thoughts: What to take from this whole topic.

If there is one main point I want to leave you with, it’s that this whole approach to sleazy “linking” strategies has in the long term had very negative consequences, every time and any future methods of this nature will only end up the same way.

Redirects can easily be purchased, spammed, and in short, easily be created. When something is easy created, it often lacks quality and that is how Google looks at these things, which is why they devalued everything. It’s not like they directly “punished” the websites doing this stuff, they just took away the value of all that FAKE value they pretended to have.

So to the people who complain about how hard it is to get rankings and end up engaging in these tactics, I will say 2 things:

1) I have no regards if you do this, you are going to only hurt your business.

2) Thank you. You will make it easy for Google to spot and destroy your rankings so real, actual high quality sites can replace you.

3) I know how tempting it can be to use these tactics to get those fast rankings, but it’s going to be an endless hustle that will always end in Google punishing you. You need to embrace that SEO is not about these dirty methods anymore and is all about the opposite. See the recommendation I put above for an example.

20 thoughts on “What a Link Farm is And Why You Should Never Use it.”