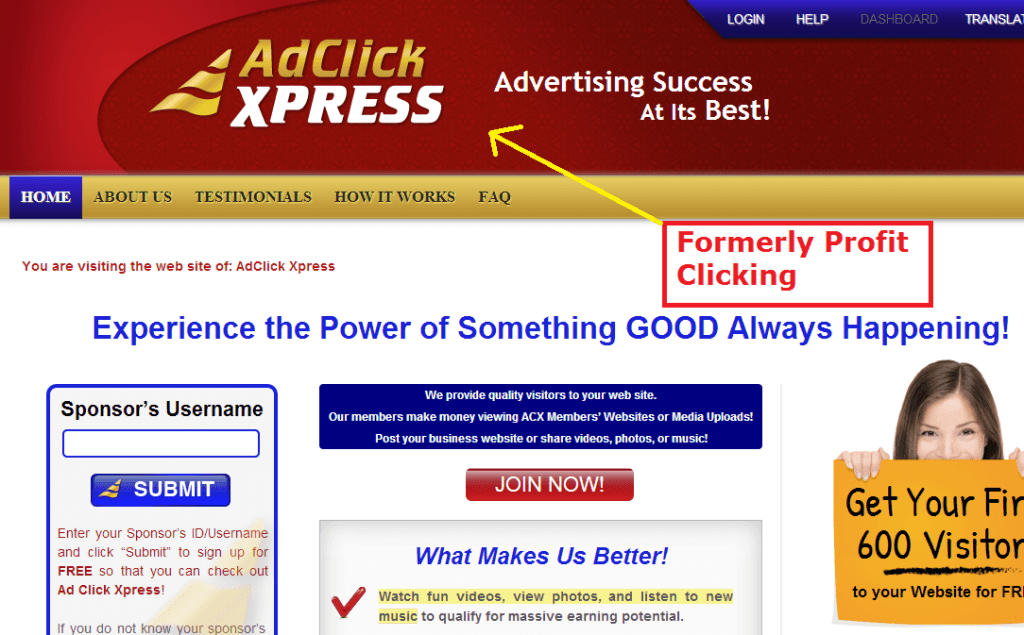 To date, I’ve reviewed over 40 make money online products. While most of them are terrible, only 2 of them have been labeled ponzi schemes.

With Profit Clicking (PC), it looks like it’ll be 6. How is that mathematically possible? Shouldn’t it be 3? Nope, because:

I do want to point out what I write here is my opinion. Having said that, there are A LOT of red flags with this company including the SEC warning against it.

Profit Clicking in a nutshell:

From my understanding, it is an “investment opportunity” where people are encouraged to join and are paid for either creating ads or viewing them. In theory it is a network that is focused on exposure to “help” businesses reach more people.

A program which did this sort of thing is (former) Traffic Monsoon. And guess what it ended up being and becoming? Yeah…

Based on information I gathered, you are/were (the company has been bought out) able to sign up for free and received a $10 credit to start. You could apply this credit in one way or another to receive further credit within the system.

You could also invest your own money into the program and basically receive a % back, anywhere from 1-2% daily & on weekends for basically doing nothing but viewing ads (smells fishy already).

The idea behind this is basically a “snowball” idea on investing. The more you invest, the more those small percentages will add up. In addition, there is also a “maturity” date which I believe lasts for a few months in which everyday the percentages continue to be added to your investment.

In addition, you can also promote the company to others and earn money from each referral as well as people they refer, meaning secondary referrals.

This explanation is very broad, but in all honesty, it is a difficult system to explain without going into numbers and that may very well end up confusing a lot of people. Frankly, I had issues understanding the system because it didn’t actually make sense from a legitimate point of view and the fact that I have 8+ years in internet marketing, I can see holes very quickly.

1. To date, the program has been bought out 2 or more times.

Originally, there was a program called Just Been Paid, but with a 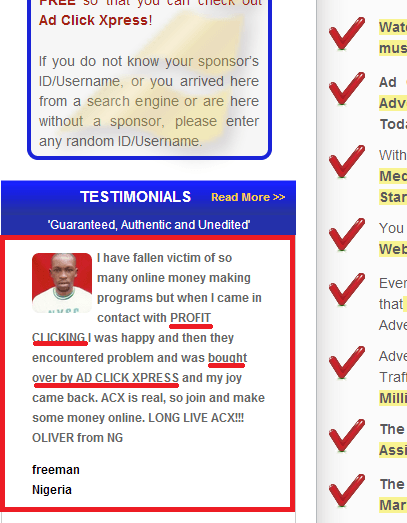 lot of technical issues, it went down the drain and was purchased by Profit Clicking. As issues with PC began to amass, which I’ll be pointing out below, eventually the company also got purchased by another one: Ad Click Xpress.

In addition, after PC went out of business, it’s owner magically re-appeared and said a new system is out that will be better than the old one. This brought into light Click Paid, which is basically PC all over again.

However, if you try to Google it, the first page that will show will be…drum roll…Ad Click Xpress yet again.

So basically if you’re looking to join PC (Which I advise against) or Click Paid, you’ll end up joining Ad Click Xpress and from what I’ve seen/heard, not much has changed from Just Been Paid all the way to Ad Click Xpress. The business model is the same and I assume so are the problems.

Here is a screenshot (right) which basically says that PC IS Ad Click Xpress:

First off, I have major issues with this. If you look at the main Ad Click Xpress website, it looks downright unprofessional. And the testimonial which I just showed you? Freeman….Really? Come on guys…

Anyway, the point of this red flag is to show that there is a VERY questionable history with PC, before it was called that and I’m sure there will be the same issues with the new company that purchased it.

There is also speculation that they are just trying to keep the ponzi scheme running for as long as possible so when the previous companies began to accumulate too many complaints, they would switch over to a new company and try to keep the same model running. This is again speculation, but I personally thing there is truth to it.

No matter how many products I review, one common feature in 99.9% of all them is the idea that it’s easy to make money online. With PC and the now Ad Click Xpress, it is no different. Upon visiting their “how it works” page, I came upon this image:

Now in my experience, something this broad raises another red flag for me. There is no actual explanation of how the system actually works. It only really explains how it’s going to pay you and how great it is. Explanations like these are in my experience indicators of scams.

3. The business model reminds me of Zeek Rewards.

If you haven’t heard, that company was shut down by the SEC for being a $600 million dollar ponzi scheme. I noticed A LOT of similarities between Profit Clicking & Zeek Rewards mostly in the numbers they were using and they were trying to point that basically “everyone wins” in their system.

In my experience, any company that doesn’t use PayPal should be one to stay far away from. They probably don’t use PayPal because PP won’t allow the company to transfer funds through them and that usually happens if they believe there is something shady with the business.

Ponzi scheme rumors usually start when people have issues withdrawing money. This happened all the way back to when PC was still Just Been Paid, all the way through to when it was purchased by Profit Clicking and will probably have the same issues now that it’s called Ad Click Xpress.

Withdrawal issues began when too many people wanted to take their money out which caused PC to impose a limit on how much people could withdraw and when. When complaints arose, they implemented a “bucket” system where people could on a daily basis withdraw money.

This plan apparently went to absolute crap because it was on a “first come first serve basis” and this would only be open for a little bit everyday. So what happened? Whenever it would be open, members of PC would literally swarm to get their money and rightfully so.

This caused the bucket option to close citing there were too many withdrawals and that people who couldn’t take their money out would have to try again later. When that system started losing fuel, they implemented a “green light system“.

Basically now people instead of waiting for the bucket to open up, would see a green light which would indicate they could take out their funds. This plan also went down the drain because many members claimed this didn’t even work! Here’s a video showing this:

6. The SEC advises against it.

As if you needed more reasons to stay away from it…

I am personally against any and all MLM companies (why it’s so). I feel that most of them are downright pyramid schemes and in this case, we can add ponzi scheme to the list.

0 out of 10 stars. Absolute ponzi scheme. Stay away from it and Ad Click Xpress too. If you’re tired of scams like these, try my #1 recommendation.

Some would argue that I am being presumptive in that I am considering Ad Click Xpress to be a bad company just because it’s associated with PC. They would be partially right, but I think in the end, this company will probably fall apart JUST LIKE the other 2 did before it and be renamed something else.

I’ve seen this crap happen before. You get too many complaints/bugs from a scam, then the scam switches over to another name to give people the impression it’s going to fix things up. One such example is with the Big Idea Mastermind.

But in Ad Click Xpress, we already have 2 prior examples to work with. Whose to say the third time will be the charm? I doubt it.

And for anyone who is/was involved with Profit Click or is thinking of joining this new company, I say DON’T! Do not keep falling for these get rich quick schemes. This is how they get you and will continue to do so unless you stop, ask questions and do proper research!

What to do now:

If you’ve already been scammed by PC, I doubt complaining will work, at least until the company gets shut down. However, with this “switch-a-roo’s” they keep pulling switching to a new name again and again, there’s no telling how long this ponzi scheme will be able to last, but in either case, you should certainly keep trying to get your money back.

I would advise you not put too much energy into this because the truth is, it’s going to be VERY difficult to get your money back. I would recommend putting most of your energy elsewhere. In this case, focusing on finding legitimate ways to make money online, if that of course is your major goal. Do know that it is possible to succeed online, but it’s not going to happen through programs like PC or others like it.